My Message to Finance Minister Lim Guan Eng is this: You are no longer in the Opposition. You are a Cabinet Minister with a vital portfolio. Behave like one, the sooner the better; it is for the good of your reputation and your integrity as our new Finance Minister.

You should take Tun  H.S. Lee, and Tun Tan Siew Sin as your role models. Both men were not in the habit of giving press  conference on Malaysia’s finances. In recent times, Tun Daim Zainuddin was the quiet one. If I can recall, TDZ hardly spoke to the media. He was only heard when he was delivering his budget speech.

As Finance Minister, you  should know that what you say and do is market sensitive. It undermines investor confidence and Malaysia’s image.

“There is no need to demonise and put down the previous BN government at every turn in what are sometimes dubious ways. It is time to do what is needed and portray things in an accurate manner as possible to reflect the truth as far as that is possible. After all, the elections ended over two weeks ago.”--P. Gunasegaram

I have a lot of respect for Guna, who I know well over many years. He is one of the best analyst from Malaysia, known for his critical and incisive commentaries on business and financial issues.

His views in this article, Minister Lim, should be taken seriously. I know Najib Razak made a mess of our national finances when he was doing the job before you. He is being investigated for his malfeasance. Let the Rule of Law take over.–Din Merican

Is our debt really over RM1 trillion?

A QUESTION OF BUSINESS | The starting point of this debate was when Prime Minister Dr Mahathir Mohamad said the national debt was more than RM1 trillion without defining what the components of the debt were. Naturally, this caused a lot of confusion. Was the previous government lying about the debt figures? 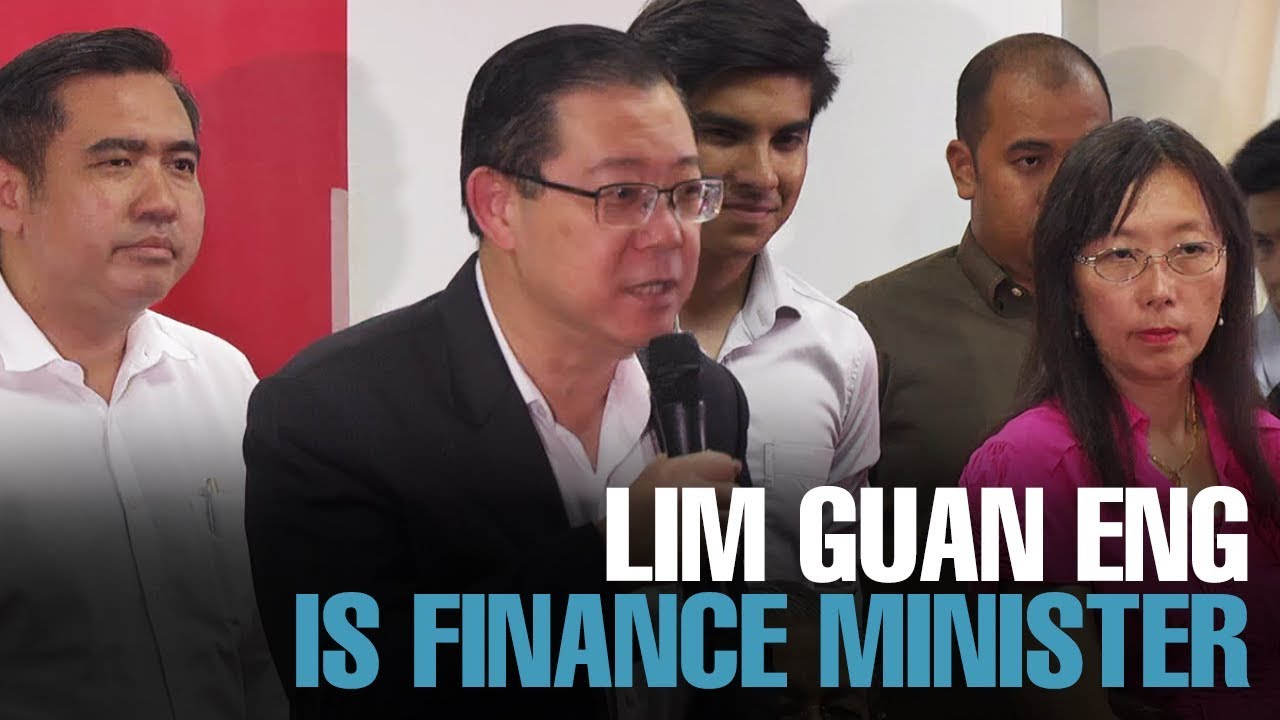 “We have found that our finance (status) eroded significantly (to the extent) we are having problems in (repaying) our debts, which have increased to a trillion ringgit,” according to a Malaysiakini report.

“This has never been done by us before […] if previously our debt stood below RM300 billion, now the debt has exceeded RM1 trillion,” Mahathir said during his first monthly assembly as head of the Prime Minister’s Department in Putrajaya.

That started alarm bells ringing and raised legitimate questions about whether there was obfuscation of government figures. This was fueled further when Lim Guan Eng in his first press conference as Finance minister confirmed what Mahathir had said.

He said this was revealed during the discovery exercise when all relevant departments were able to start consolidating their accounts and numbers, The Star reported.

“Previously, certain files were not accessible by certain people and therefore, consolidations were not available,” he said in his first press conference as the Finance Minister on Tuesday (May 22). This seemed to imply new figures after consolidations.

But when markets started to fall and former Prime Minister and Finance minister Najib Razak said the new figures “will just unsettle the financial markets, alarm the credit rating agencies and investors’ confidence in our institutions, such as our Bank Negara Malaysia”, Lim gave a breakdown (see table). 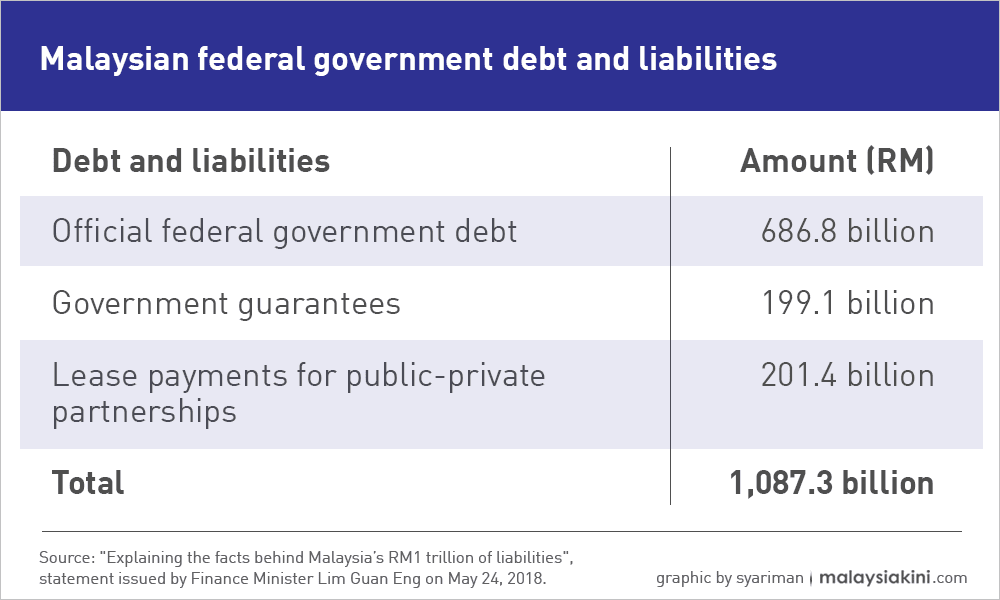 The total figure of RM1,087.3 billion (RM1.087 trillion) was given as debt and liabilities. The official government debt was given as RM686.8 billion which is about 6% higher than the figure of RM648 billion given in the Accountant-General’s report for 2016. Presumably, these are the figures for end-2017 which have not been publicly released yet. This is 50.8% of the GDP (gross domestic product – sum of goods and services produced in a year) and lower than the officially announced ceiling of 55%.

“However, let me emphasise that the obligations and financial commitments of the federal government are unchanged before May 9 and after elections today. The only change is that the new federal government has decided to call a spade a spade,” Lim clarified further. This implied that the official debt figure was correct, clearing up earlier confusion it may have been wrong and doctored.

Lim explains this thus: “In addition, the government is already committed to paying for government guarantees for various entities that are unable to service their debts. This amounts to RM199.1 billion (14.6 percent of the GDP).

“Based on the two items above, the federal government debt would amount to RM885.9 billion. This represents the 65.4 percent of the GDP as highlighted by Prime Minister Dr Mahathir Mohamad yesterday.”

PPPs can be problematic

Lim should know that this is not included when the ratio is calculated in international debt figures. But, yes, government guarantees and contingent liabilities should be taken into account in assessing the overall debt picture correctly.

The next one that Lim includes is lease payments under public-private partnerships (PPP) of RM201.4 billion. But is this fair?

Here’s what Lim says: “However, in addition to the above, the federal government is also committed and obligated to make lease payments (including rental, maintenance and other charges), for a whole list of ‘Public-Private Partnership’ (PPP) projects such as the construction of schools, hostels, roads, police stations, hospitals, et cetera.

“The lease commitments which were designed specifically to circumvent the federal government guarantee and debt limits amount to RM201.4 billion (14.9 percent of GDP).’

This does not seem to be in the public domain. I tried looking for the official figures in the Accountant-General’s 2016 report but could not locate them. Yes, there are indications that this may have been on very favourable terms to those who obtained them but it is a legitimate means of reducing the government’s balance sheet practiced now in many countries around the world.

Essentially under these arrangements, the private sector undertakes a project, for example, constructing a government office. In return, the government commits to paying rent for, say, 20 to 30 years. While borrowings reduce, as a result, the government’s operating expenditure rises.

Even if including PPP as debt is considered to be the right approach, it will be inaccurate to take into account the full repayments as debt obligations, as payments are made over long periods and include interest charges. Instead, it should be the capital expenditure incurred if the government has to undertake the projects. Damansara Member of Parliament Tony Pua, who seems to be assisting Lim in these matters, puts PPPs entered into by the previous government at around RM63 billion in value.

There is no denying that PPPs can be problematic. A problem arises if the private sector investors get too high a return, and the government suffers as a result. PPPs will not be classified as debt under most classifications. But, yes both guarantees and PPPs should be taken into account in the overall assessment of the debt and liabilities situation of the government.

No, the official debt figure is still RM648 billion, not RM1 trillion. But if you include other figures, then the effective debt obligations might rise to as high as over RM1 trillion. Even for this, the contingent liabilities figure of RM199 billion is already in the public domain and analysts, including those who do ratings, have taken it into account.

Unless the Pakatan Harapan government has solid evidence to show national accounts are tampered with, they must not make statements which may make the public, including investors, conclude otherwise. It confuses, it throws up uncertainty and makes people lose confidence in the economy.

There is no need to demonise and put down the previous BN government at every turn in what are sometimes dubious ways. It is time to do what is needed and portray things in an accurate manner as possible to reflect the truth as far as that is possible. After all, the elections ended over two weeks ago.

P GUNASEGARAM hopes that now polls are over, cyber-troopers will contribute in a real, responsible and reasoned way to discussions about our future instead of saying let those who run the government decide. That’s how we got into a mess in the first place. And please stop the personal insults and obscenities. E-mail: t.p.guna@gmail.com.

7 thoughts on “Is our debt really over RM1 trillion?”