Congratulations: Patrick Reed is the 2018 Masters Champion at August National

by Ewan Murray at Augusta National

What Patrick Reed lacks in widespread support should now be offset by widespread respect. The scale of Reed’s achievement here, in winning his first major championship, is illustrated by who and what he had to withstand.

There were occasional, understandable wobbles but Reed ultimately held firm to prevail by a shot; 69, 66, 67, 71 and 15 under par sealed Green Jacket delivery by one from Rickie Fowler.

It seemed remarkable in context that Reed’s previous Masters record included two missed cuts, a share of 49th and a tie for 22nd. Now, an individual once kicked out of a Georgia college has been afforded the last laugh. Others scoffed when Reed proclaimed himself a top-five player. He won’t achieve that ranking position with this win but such details are unlikely to bother Reed now. He is deservedly the Masters champion. 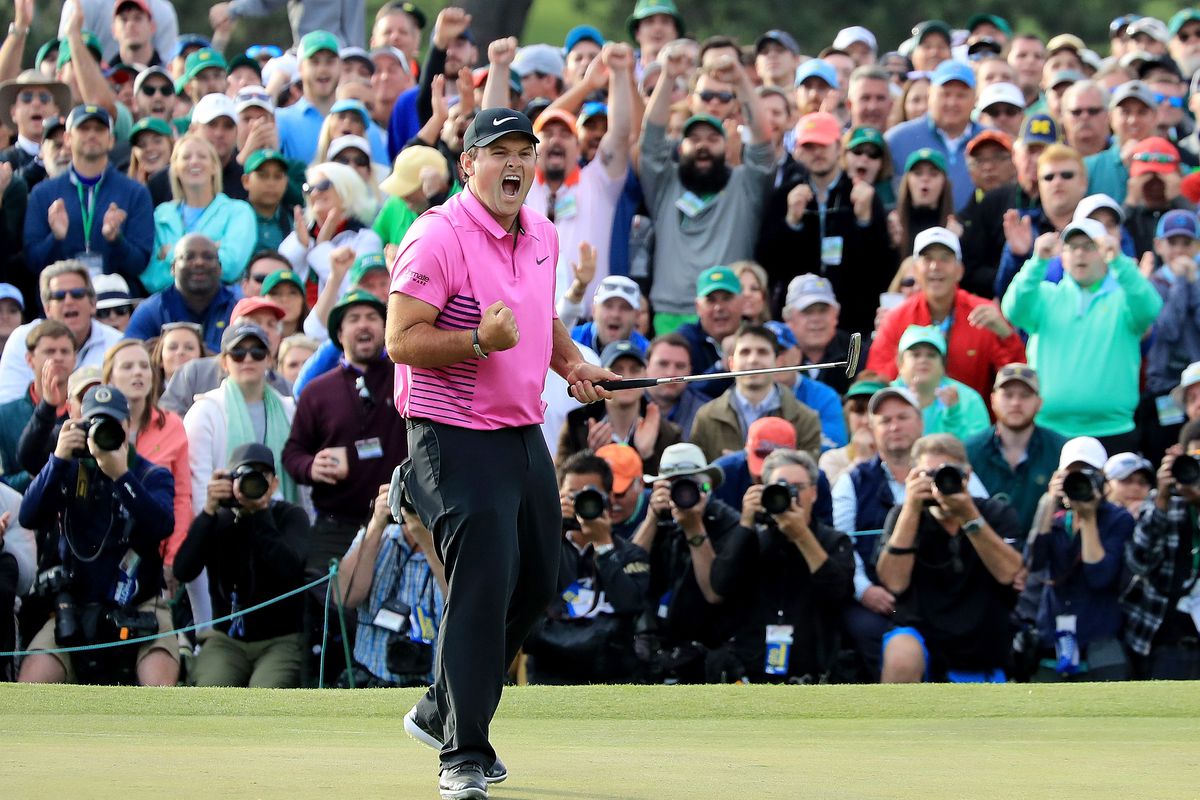 The identities of Reed’s biggest threats was the main fourth-round surprise. The Texan started Sunday believing he would have to see off a former Ryder Cup rival. Instead, US team-mates threw the strongest punches.

Jordan Spieth began the final day nine shots adrift of the lead. What subsequently transpired came within the realms of the finest closing round in Augusta history. Spieth briefly tied Reed’s lead; the cracking of a tree branch at the last halted the 2015 champion’s charge. Spieth’s 64 and minus 13 total proved in vain.

“All in all it was a great day,” said a magnanimous Spieth. “I was nine back, going out I knew I needed significant help no matter how well I played.”

Fowler was next to emerge from the pack, with a birdie at the last meaning Reed had no margin for error. Reed feared he had pulled a drive which found the left side of the fairway. A mid iron into two-putt range followed, as did typical celebration. Given what expectancy had come before, the denouement felt like an anticlimax; which is credit to Reed’s steeliness under the most intense of pressure. Fowler is worthy of credit for making sure he was outside the scoring hut to congratulate the champion. “I left it all out there, I made him earn it,” said Fowler.

Rory McIlroy’s bid to complete a grand slam will have to wait for at least another 51 weeks. Just when he needed it most, McIlroy’s putter was to prove colder than a December morning in Siberia. His Sunday shortcomings can be linked only to that scenario, with confidence visibly draining from a player who was so in control of his emotions for 54 holes.

The Northern Irishman missed from 4ft for an eagle at the 2nd in what was a jarring indicator of woes to come. McIlroy didn’t recover confidence or touch on the greens thereafter; his 74 meant nine under plus a share of fifth with Henrik Stenson, Bubba Watson and Cameron Smith. The 28-year-old McIlroy cut a disconsolate figure when walking from the 72nd green. This one will sting.

Jon Rahm earned fourth at 11 under, with the Spaniard’s visible annoyance at that scenario telling in respect of competitive instinct. A major win appears close for Rahm.

Paul Casey, who started day four in the nether regions of the scoring table, briefly flirted with history. The Englishman was nine under par through 15 holes; raising the prospect of equalling the Masters record score of 63. As often transpires in these scenarios, a jab was delivered by reality. Casey bogeyed each of his last two holes for a 65 and aggregate of five under.

“That was fun, wasn’t it?” said Casey. “Birdie, birdie, eagle on Amen Corner, I’m going to remember that for a long time.

“I’m obviously disappointed. I got out of position horribly on 17 and 18 which was kind of reminiscent of how I played this week. I haven’t been very good until that streak today. But to shoot 65 today, it would have been hard to turn that down. And it was fun; I know 63 is the course record, 62 is the lowest ever in a major. So I was aware. Not particularly nervous, just kind of having a good time and obviously didn’t do it, but it was fun.” 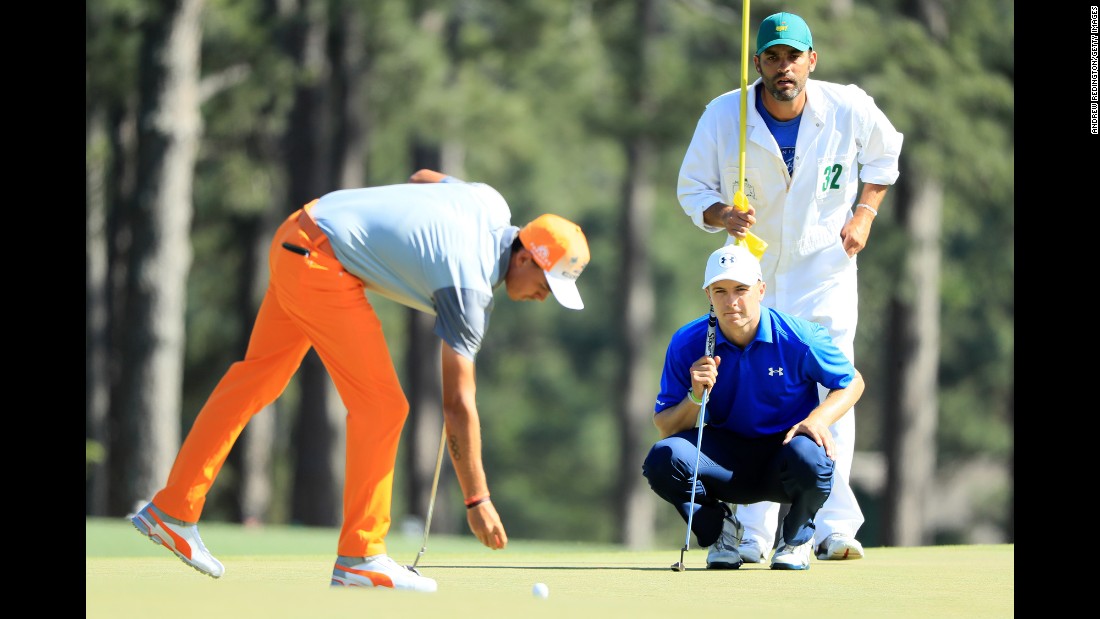 As this major hurtled towards its end, the fevered anticipation attached to Tiger Woods’s involvement felt like an eternity ago. Woods had set a Sunday target of returning to even par on aggregate having started at plus four. He did precisely that before an untimely bogey at the last, with a 69 most notable for a stunning Woods eagle at the 15th. In recognition of that, Woods will take home some crystal goblets as opposed to the Green Jacket, which was never really a viable target. The 42-year-old, typically, was vague on where and when he will next appear in a tournament environment.

“Generally after this tournament I put away the clubs for a while,” Woods said. “I usually take three to four weeks off – throughout my entire career – and usually the clubs are put in the closet and I just kind of get away for a while. The run-up to this event is pretty hard and pretty gruelling. I pushed myself pretty hard to get ready.

“So I’ll take a little time off, get back in the gym and start working on my body again. I’ll get it in good shape and get back at it again.

“It’s disappointing that I didn’t hit the ball well enough this week. But to be able to just be out here competing again, if you had said that last year at this particular time I would have said you’re crazy. I had a hard time just sitting or walking back then. So now to be able to play and compete and hit the ball the way I did, that’s quite a big change from last year.”

Twelve months ago, Reed didn’t even feature on Masters weekend having signed for rounds of 76 and 77. What’s the opposite of horses for courses?