COMMENT | Sanusi Junid, who died yesterday after being seen as seemingly healthy at the last public occasion he attended which was on the night before, was a knowledgeable man, notes Muhyiddin Yassin in an encomium to the former Kedah Menteri Besar.

That may be the most accurate thing said about Sanusi among the plethora of compliments friends and acquaintances piled on the former minister and UMNO Secretary-General and Mahathir loyalist.

Speaking well of the just-deceased is obligatory. But saying something that resonates with what is generally known of the person that manages to be both accurate and complimentary is harder to bring off.

Sanusi was a loyal lieutenant, one who was content with being just that – a hewer of wood and drawer of water – but able to bring a certain wit to that mundane role, which is uncommon among people of his disposition.

The difference between both, in the role that subalterns revel in, is in the ability to offer servility with style. Well, if you going to apple polish, might as well do it with aplomb.

Sanusi’s loyal lieutenancy to Mahathir, the leader who he served the longest in a long career in the penultimate echelons of UMNO, was service of a certain witty class.

Consider what he said about Anwar Ibrahim when the just-sacked Deputy Prime Minister drew big crowds at the National Mosque and at Kota Semarang in Kedah in the immediate aftermath of his expulsion from government and UMNO:

“He is a snake charmer summoning spirits from the deep. But will they come?”

Epigrams are uncommon among equerries whose job is to put the best face on their point man’s policies and acts, especially when these invite public controversy and consternation.

On Najib’s refusal to admit to wrongdoing in the 1MDB imbroglio, the biggest financial scandal to afflict a nation anywhere in the world, Sanusi cited his experience when as Deputy Home Minister he had to sign off on a score of hangings of criminals in Pudu jail.

Sanusi said he had the opportunity to observe the condemned in their last days before being hanged. He observed that not even Botak Chin, the notorious criminal of the mid-70s, would admit to being guilty and deserving of his deserts, which Sanusi took as testimony to unregenerate human nature.

His ability to illustrate his arguments with analogy and metaphor that would make one sit up and notice must have been the nub of Sanusi’s appeal to his bosses.

Sure, he had some wacky suggestions such as growing padi on roof tops, and not-so-gauche ones like his urging people to eat ostrich and rabbit meat, as alternative sources of protein.

But these bizarre suggestions were not the hallmark of his career. A certain knowing feel for the weaknesses of human nature distinguished his long lieutenancy to Mahathir.

When incumbent Osman Aroff attempted to head off an announcement from Mahathir in 1996 on Sanusi as his replacement as Menteri Besar of Kedah by organising a prayer session at the MB’s residence, followed by dinner and the attendees’ signing on a pledge of loyalty to Aroff, Sanusi cracked:

“Even I would have signed off on the pledge if prayers and dinner were on the cards,” was his self-deprecating putdown of the drama.

Likewise his comments on the resignation of Nasharuddin Alang Saidin, an Anwar flunkey, from the post of Executive Secretary of UMNO in 1987 after less than three months on the job (Sanusi was the Mahathir-appointed Secretary-General): “His resignation is just like any other.”

Sanusi, whose loathing for Anwar was heartily reciprocated, was extraordinary in being able to juggle his fidelity to Mahathir with aversion for someone (Anwar) whose support for Mahathir in the 1982-98 period was critical to the incumbent PM’s longevity in office.

But this fealty didn’t extend to tolerating Nasharuddin’s tenancy in the Umno secretariat where the secretary-general would normally want to hold sway.

“He (Nasharuddin) won’t last three months,” Sanusi let-on to a journalist friend of his, shortly after Anwar persuaded Mahathir to allow Nasharuddin’s emplacement in the secretariat in the immediate aftermath of Mahathir’s narrow defeat of Tengku Razaleigh Hamzah in the party polls in April 1987. Anwar’s support for Mahathir in that tussle had been crucial to the outcome.

A lieutenancy this cagey and wittily shrewd is rare in Malaysian politics. 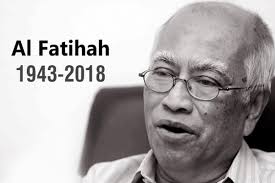 According to Bernama, Akramshah said Sanusi had gone for a medical checkup yesterday.

“Yesterday, my father went for a medical checkup and everything was fine, in fact he even attended the Pakatan Harapan manifesto launching last night without showing signs of a health problem.

“This morning, (he) had performed ablution and was waiting to go for prayers when he suddenly fell unconscious,” he was reported as saying.

Sanusi’s body has been brought to Saidina Umar Al-Khattab Mosque for prayers and will be laid to rest at Bukit Kiara Muslim Cemetery after Friday prayers.

Sanusi was UMNO Minister of Rural and Regional Development between 1981 and 1986 and also served as Deputy Home Minister from 1980 to 1981.

“We want to die in the ring,” Sanusi said.

But he also said there was no longer any point for him to stay on in UMNO as it was no longer the party he joined in 1963. He left UMNO the first time in 2008 over dissatisfaction with then Party President and Prime Minister Abdullah Ahmad Badawi.

More recently, he told The Malaysian Insight that UMNO was now a party “with the same name (but) does not have the spirit and goals of the UMNO that I used to be a part of”.

Sanusi’s long political career in public service began at the age of 31, when he was elected the Jerai MP. Later, he also won the Jerlun parliamentary seat in the 1982 General Election.

He served a stint as Federal Minister of Agriculture before becoming Kedah Menteri Besar from 1996 to 1999. Most of his years in public service were under Dr Mahathir’s administration and the two men, who are both Kedah-born, are close.

In 2015, when Dr Mahathir had not yet left UMNO to start Bersatu, Sanusi in an interview said he and the former Prime Minister were living on “borrowed time” as they sought to raise pressure within UMNO for Prime Minister Najib Razak’s resignation over alleged scandals in state investor 1Malaysia Development Bhd.