President Obama’s foreign policy doctrine, like many foreign policy doctrines, was contradictory at times, and it sometimes lacked coherence. Obama himself resisted the desire of others (including yours truly) to corral his various foreign policy and national security impulses into a comprehensive, globe-spanning, capital-D doctrine. But Obama possessed a number of well-developed foreign policy predispositions, and he exhibited, over time and under pressure, extraordinary fidelity to some of these views. One such view held that the U.S. has traditionally paid too much attention to the Middle East, and that, in any case, even concentrated American attention could not make the region a better place—and actually, in some instances, made it worse. Another of Obama’s salient foreign policy views held that the U.S., particularly in the Middle East, had traditionally been too quick to pursue military solutions to problems that neither represented core U.S. national security interests, nor were susceptible to amelioration by missile strike. 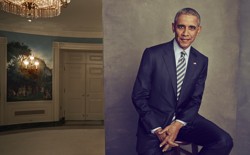 These two impulses, more than any of his other views, informed his decision, in 2013, to go back on his promise to punish the regime of Syrian president Bashar al-Assad for using chemical weapons on civilians. Early in the Syrian civil war, Obama publicly drew a red line concerning Assad’s behavior, but later decided to forgo military strikes, even after being presented with near-definitive proof that Assad had crossed the red line in grotesque fashion. Obama was widely criticized at home and abroad—particularly by the leaders of many U.S.-allied nations—for behavior interpreted as feckless and weak, but he later told me, in one of the interviews I conducted with him for a 2016 article on his worldview, that he was “very proud of this moment.”

“The perception was that my credibility was at stake, that America’s credibility was at stake,” Obama explained. “And so for me to press the pause button at that moment, I knew, would cost me politically. And the fact that I was able to pull back from the immediate pressures and think through in my own mind what was in America’s interest, not only with respect to Syria but also with respect to our democracy, was as tough a decision as I’ve made—and I believe ultimately it was the right decision to make.”

Obama argued that, by going against the conventional wisdom, he was breaking the hold on American policymakers of what he called “the Washington playbook,” which he described this way: “It’s a playbook that comes out of the foreign-policy establishment. And the playbook prescribes responses to different events, and these responses tend to be militarized responses. Where America is directly threatened, the playbook works. But the playbook can also be a trap that can lead to bad decisions. In the midst of an international challenge like Syria, you get judged harshly if you don’t follow the playbook, even if there are good reasons why it does not apply.”

In the matter of the vanishing red line, Obama claimed ultimate victory in large part because the Russian president, Vladimir Putin, offered him a way out—in exchange for forgoing strikes on Assad regime targets, the Russians would convince the Syrians to give up their chemical weapons stockpiles. Huge stockpiles of chemical agents would subsequently be shipped out of Syria for destruction, and Obama’s allies explained the sagacity of his approach by noting that President George W. Bush went to war in Iraq to neutralize weapons of mass destruction that no longer existed by the time of the 2003 invasion; Obama, on the other hand, avoided war in Syria while somehow managing to neutralize its chemical stockpiles.

The events of the past week, culminating in the decision by President Obama’s successor to launch a punitive strike on a Syrian air base in retaliation for Assad’s continued use of chemical weapons against civilians, prove a number of points, some that reflect well on Obama, and some that do not. The first is that the 2013 Obama-Putin deal to disarm Assad of his chemical weapons was a failure. It was not a complete failure, in that stockpiles were indeed removed, but Assad kept enough of these weapons to allow him to continue murdering civilians with sarin gas. The argument that Obama achieved comprehensive WMD disarmament without going to war is no longer, as they say in Washington, operative.

President Obama failed to convince Washington to put away the playbook permanently.The events of the past week also prove that a core principle of the Obama Doctrine is dead. President Trump’s governing foreign policy doctrine is not easily discernible, of course. His recent statements about Syria—kaleidoscopic in their diversity—combined with his decision to order an attack, have half-convinced me that he is something wholly unique in the history of the presidency: an isolationist interventionist.

But what is not wholly novel about Trump is that he, and his top advisers, under pressure to respond to Assad’s use of chemical weapons, reached for the same playbook that Obama resisted opening. This decision returns the U.S. to a historic norm. In other words, President Obama failed to convince Washington to put away the playbook permanently.

But now that the playbook is back off the shelf and in use, it is worth considering just why Obama was so hesitant to confront Syria, and its sponsors in Moscow and Tehran, militarily. In 2013, Obama feared, not without justification, the second- and third-order consequences of an American missile strike on the regime. Even before he became president, Obama worried greatly about slippery slopes in the Middle East. In Syria, he understood that Assad would most likely survive an American missile strike on his airbases; the day after such strikes ended, Assad, Obama believed, would have emerged from his hiding place, and declared victory: The greatest power in the world tried to destroy him, and failed. Obama was acutely aware that a one-off strike (a theoretical strike described as “unbelievably small” by his secretary of state, John Kerry), could possibly have served as a convincing brush-back pitch, but he was also aware that such a limited strike could have been wholly ineffectual, and even counterproductive. Assad and his allies, understanding that the appetite of average Americans for yet another Middle Eastern war was limited, could have tried to provoke Obama into escalation. An all-out war against the Syrian regime would have been, in many ways, Obama’s Iraq. And Obama wasn’t interested in having his own Iraq.

The curious thing is that Donald Trump is also not interested in having his own Iraq. And yet here he is. Obama was known for an overly cerebral commitment to the notion of strategic patience. Trump seems more committed to a policy of glandular, non-strategic impatience. Obama may have been paralyzed by a phobic reaction to the threat posed by the slippery slope. Donald Trump now finds himself dancing at the edge of the slippery slope his predecessor so assiduously avoided.

*Jeffrey Goldberg is the editor in chief of The Atlantic and a recipient of the National Magazine Award for Reporting. He is the author of Prisoners: A Story of Friendship and Terror.