Congratulations to the People of Thailand

Crown Prince Vajiralongkorn becomes Rama X of Thailand’s Chakri Dynasty, but will not formally be crowned until after his father’s cremation, which is expected next year.

Crown Prince Maha Vajiralongkorn became the King of Thailand late Thursday, opening a new chapter for the powerful monarchy in a country still mourning the death of his father.

The 64-year-old Prince inherits one of the world’s richest monarchies as well as a politically febrile nation, 50 days after King Bhumibol Adulyadej’s death.

After weeks of complex palace protocols the Prince was invited by the head of the National Legislative Assembly (NLA) to ascend the throne in an event broadcast on all Thai television channels.

“I agree to accept the wishes of the late King… for the benefit of the entire Thai people,” said Vajiralongkorn, wearing an official white tunic decorated with medals and a pink sash.

The sombre, ritual-heavy ceremony at his Bangkok palace was attended by the Chief of the NLA, junta leader Prayut Chan-O-Cha, and the powerful 96-year-old head of the privy council, Prem Tinsulanonda.

Red-jacketed courtiers looked on as a palace staff member, shuffling on his knees, presented the new King with a microphone through which he delivered his few words of acceptance. 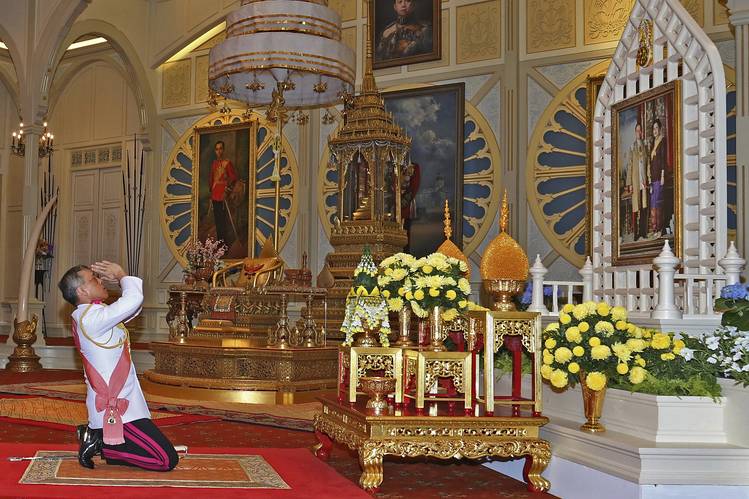 His Majesty King Vajiralongkorn then prostrated himself, hands pressed together in respect, to a small shrine topped by a picture of his father and mother —Her Majesty Queen Sirikit Kitiyakara.

He becomes Rama X of Thailand’s Chakri dynasty, but will not formally be crowned until after his father’s cremation, which is expected next year.

Bhumibol’s reign, which ended on October 13, spanned a tumultuous period of Thai history pockmarked by a communist insurgency, coups and street protests.

It also saw breakneck development which has resulted in a huge wealth disparity between a Bangkok-centric elite and the rural poor.To many Thais, Bhumibol was the only consistent force in a politically combustible country, his image burnished by ritual and shielded by a harsh royal defamation law.

The United States offered its congratulations to the new King, saying it looked forward to strengthening ties with Thailand. “We offer our best wishes to his majesty and all of the Thai people,” the State Department said.

“His father, King Bhumibol, ruled the Kingdom of Thailand with vision and compassion for 70 years and was a great friend of the United States. The United States and Thailand enjoy a longstanding, strong, and multifaceted bilateral relationship, and we look forward to deepening that relationship and strengthening the bonds between our two countries and peoples going forward.”

Monks chanted blessings at Buddhist temples to mark the new monarch’s ascension — an era-defining moment for most Thais who for seven decades knew only Bhumibol as their King.

His Majesty Vajiralongkorn does not yet enjoy the same level of popularity.He spends much of his time outside of the public eye, particularly in southern Germany where he owns property.

He has had three high-profile divorces, while a recent police corruption scandal linked to the family of his previous wife allowed the public a rare glimpse of palace affairs.

Thursday’s ascension ends a period of uncertainty since Bhumibol’s death prompted by the Prince’s request to delay his official proclamation so he could mourn with the Thai people.

Thailand’s constitutional monarchy has limited formal powers but it draws the loyalty of much of the kingdom’s business elite as well as a military that dominates politics through its regular coups.

Analysts say  His Majesty King Vajiralongkorn, untested until now, will have to manage competing military cliques.

In a brief televised address after the ceremony, Prime Minister Prayut Chan-O-Cha, who as army chief led the 2014 coup, praised the new King “as the head of the Thai state and heart of the Thai people.”

The Thai monarchy is protected from criticism by one of the world’s strictest lese majeste laws, carrying up to 15 years in jail for every charge of defaming the King, Queen, heir or regent.

That law makes open discussion about the Royal Family’s role all but impossible inside the Kingdom and means all media based inside the country routinely self-censor. Convictions for so-called “112” offences — named after its criminal code — have skyrocketed since the Generals seized power in 2014.

Experts say most have targeted the junta’s political opponents, many of whom support the toppled civilian government of Yingluck Shinawatra.

The emergence of Yingluck’s brother Thaksin in 2001, a vote-winning billionaire seen by many of the rural poor as their champion, prompted the recent round of political conflict. The army and royalist establishment have toppled two governments led by the siblings, accusing them of nepotism and corruption.

by The Sarawak Report

The fun-loving communications chief in the Prime Minister’s Department, UK national Paul Stadlen, has been spending the past fortnight shredding documents at his offices at the Bangsar Menara building, say insiders.The job was all done and his 8th floor office neatly shut and closed just days before the raid was carried out down the corridor on the SRC International office, which is run by Jho Low’s close contact Nik Faisal Ariff Kamil, last Friday.

Others on the corridor suspect that Stadlen received a tip off on the raid – one that he did not share with others:

“…man with shredder seen coming in and out in days before raid. Stadlen office shut up just before raid…. am thinking Stadlen getting tip off before SRC / NCT office raids. His office not getting raided that day because nobody there. So Stadlen saves his own skin and doesn’t share his tip off with others”, one said bitterly to Sarawak Report.

The information is useful, because it indicates that not only was SRC raided, but that the National Communications Team, which also forms part of the Prime Minister’s Office, were also subjected to the scrutiny of law enforcers on that day.

Indeed, the 8th Floor of the Menara Building appears to have become something of a parallel outfit, operating off site and outside of the Prime Minister’s official bureaucracy. This has amongst other things enabled the former APCO chief, Stadlen, to disguise his role as the man in actual charge of communications.

The money taken by SRC back in 2011 has never been properly accounted for and the company was brought directly under the Ministry of Finance (also controlled by Najib) as demands for transparency grew at 1MDB.

Now that it has been ascertained that millions of ringgit were recently transferred from SRC by Nik Faisal Ariff Kamil into the Prime Minister’s own personal accounts (the background to last week’s raid) there is inevitable speculation that this company could have been used to fund the PM’s ‘special ops’ and communications teams based on 8th floor of the Menara building – including the ludicrously well paid Stadlen himself, whose salary was moved off the official books following criticism some years back.

Stadlen’s disgruntled colleagues are now wondering if he is planning to jump ship completely, since he is no longer operating out of his Menara office.

“He is still in KL for now but gone dark. Not working from Bangsar office, but spotted in PMO and PM’s KL residence”, confirmed one.

Indeed, Stadlen, who currently sports a brand new Audi A7, is still confirmed as working for the Prime Minister and has been seen in his offices and residence over the current crisis. However, he is attempting to lower his profile.  He has changed his business card from the old one, which confirmed his role, to a lower key number:

Stadlen, whom ministers have denied is being funded by the government to master-mind its PR, is therefore working harder on covering his role, but clearly still keen to hang on if he can.

Sarawak Report is reliably informed, for example, that it was Stadlen who penned the Foreign Minister, Anifah Aman’s recent “open letter” to the New York Times, which lashed out at the former Prime Minister Dr Mahathir for criticising 1MDB and corruption issues associated with the present regime.

“Tun Dr Mahathir told the New York Times that UMNO “lacks vision and talented people”, that it “has become a repository of patronage-seeking politicians”, and that members “try to keep out people who are more intelligent than themselves”. But it is Tun Dr Mahathir himself, having led the party for 22 years, had during his time, worked to cultivate “yes men” and entrench his position – even introducing a quota system in the nomination for the UMNO presidency in order to prevent challengers – rather than bringing in talent and strengthening the party. On the other hand, it is Prime Minister Najib who democratised the party constitution to make it far easier to challenge him for his job” thundered Stadlen, pretending to be Anifah Aman.

You can see why the Prime Minister is keen to keep him in post.However, there is a dictum, which is that when the PR man becomes the story…. well then it is time for him to go.

Stadlen has enjoyed a pay packet to die for, thanks to his services on behalf of the present Prime Minister – acting as a willing attack dog against those seen as his political enemies. He has also plainly enjoyed all the pleasures that Kuala Lumpur has to offer. However, now the investigation has clearly begun into the financing of the more shadowy aspects of the Prime Minister’s operations, bets are on over how long it will be before Paul Stadlen steps onto a flight back to London.