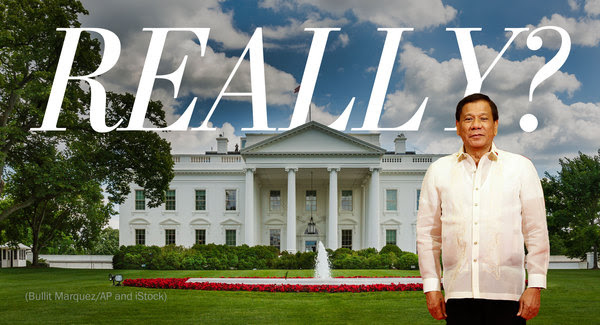 Over the weekend, the White House announced that President Trump had invited President Rodrigo Duterte of the Philippines for a visit to Washington, following what was deemed a “very friendly conversation” over the phone between Trump and his counterpart in Manila.

Despite the close ties between the United States and the Philippines, the move surprised Trump’s critics and allies. In his 10 months in power, Duterte has become one of Asia’s most controversial leaders. He has presided over a vicious drug war that has seen thousands killed by extrajudicial hit squads — encouraged, say critics, by Duterte’s explicit orders. Last week, a Filipino lawyer filed a complaint at the International Criminal Court, accusing Duterte and 11 other Filipino officials of mass murder and crimes against humanity. (Duterte has shrugged off the filing and said it will not deter his campaign.)

The complaint takes into account the killings of 9,400 people stretching back to 1988, when Duterte became the Mayor of the southern city of Davao and began making his reputation as a tough guy willing to do anything to crack down on crime. “The situation in the Philippines reveals a terrifying, gruesome and disastrous continuing commission of extrajudicial executions or mass murder,” read the complaint. An estimated 8,000 people have been killed since Duterte became President last summer (2016).

None of this seemed to faze the White House. In the readout of the phone call, the only mention of Duterte’s astonishing record of violence seemed to be a positive one. It said that the two leaders “discussed the fact that the Philippines is fighting very hard to rid its country of drugs, a scourge that affects many countries around the world.”

White House Chief of Staff Reince Priebus did his best to evade the thrust of the question when asked on ABC’s “This Week” if human rights were no longer a concern for the Trump Administration.

“Absolutely not,” responded Priebus. “It doesn’t mean that human rights don’t matter, but what it does mean is that the issues facing us, developing out of North Korea, are so serious that we need cooperation at some level with as many partners in the area as we can get.” 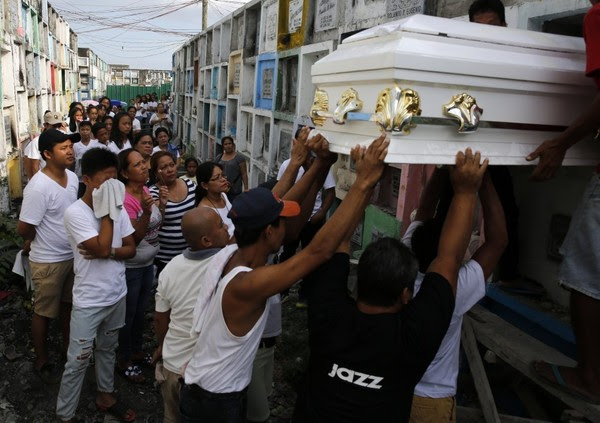 The importance of securing strong Filipino support in dealing with North Korea is highly debatable. But administration officials indicated that the overture to Duterte may be part of a broader and much-needed mending of fences.

“The White House statement could be seen as implicit support, but perhaps is better understood as offering common ground for engaging with Duterte,” said Natalie Sambhi, a Research Fellow at the Perth USAsia Center in Australia, to The Post.

U.S.-Filipino relations took a turn for the worse last year, Duterte’s first in office and the final one for Barack Obama.

“The relationship between the United States and the Philippines soured under President Barack Obama, who criticized Duterte’s bloody war on drugs,” reported my colleagues. “Not one to take criticism lightly, Duterte snapped at Obama on a few occasions, telling him to ‘go to hell’ and, at one point, using the Tagalog phrase for ‘son of a bitch’ or ‘son of a whore’ when addressing the then-U. S. president. In September, Obama canceled a meeting with Duterte, whom he called a ‘colorful guy.‘ ”

(Obama is hardly the sole target of Duterte’s notoriously salty language: He used similar words for Pope Francis, too, and has sparked global headlines with rape jokes, admiring references to Adolf Hitler, boasts about mass killing and an insistence at one point that he would eat the livers of suspected terrorists. Even Trump was on the receiving end: “Donald Trump is a bigot, I am not,” Duterte told the Associated Press last year.)

The tensions saw Duterte publicly drift toward China. In a speech in Beijing last year, he told his Chinese audience that “I’ve realigned myself in your ideological flow.” He has inked billions of dollars of deals with China, Japan and other countries in the region. As my colleague Emily Rauhala wrote earlier this year, Duterte is playing an opportunistic game, wooing all whom he can as part of a new “independent” foreign policy. But, as Rauhala noted, his efforts fly in the face of public opinion and the country’s political establishment, which largely backs the United States and is wary of Chinese expansionism in the South China Sea. 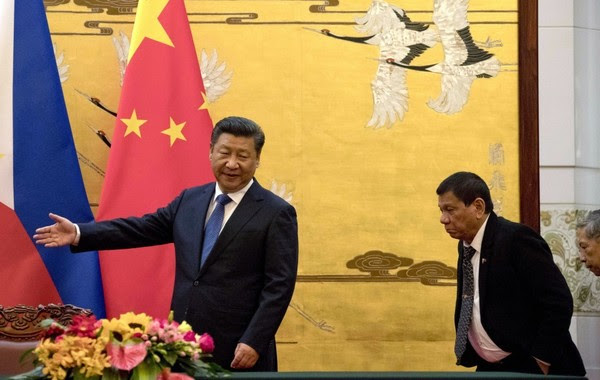 Duterte is shown the way by Chinese President Xi Jinping before a signing ceremony in Beijing in 2016. (Ng Han Guan/Associated Press)

The other lens through which to view Trump’s invitation to Duterte is that of the American President’s apparent penchant for strongmen. While the European Union called for an investigation into the referendum last month that conferred vast new powers upon Turkish President Recep Tayyip Erdogan, Trump was the first Western leader to congratulate Erdogan on his victory. He also hosted Egyptian President Abdel Fattah al-Sissi, a coup-plotting former army man whose regime carried out a ruthless crackdown on Islamists and dissidents. No matter the geopolitical scenario, Trump seems to have a genuine affinity for men of action who brook little dissent.

“If Duterte were not immune as Head of State, he would be barred from admission into the United States,” noted John Sifton, the Asia Director of Human Rights Watch, in an emailed statement. “Existing U.S. laws and policy prohibit visas and entry to persons against whom credible allegations of gross human rights abuses have been made.”

Sifton goes on: “The invitation is an abomination, just as Trump’s invitation to Sissi was an abomination, and although his personality traits would seem to make it impossible, Trump should be ashamed of himself. By effectively endorsing Duterte’s murderous ‘war on drugs,’ Trump has made himself morally complicit in future killings.”