In the middle of two gigantic scandals involving hundreds of millions of US dollars, the Malaysian government may be courting another mess, according to critics in Kuala Lumpur.

In mid-September, in an affair that is being widely talked and written about in Malaysia, the government-owned Prasarana Malaysia Bhd. (Infrastructure Malaysia Bhd) awarded a RM11.5 billion contract to extend the capital area’s light rail system from the city center to the port city of Klang on a so-called project-delivery-partner basis to the government-linked Malaysian Resources Corp Bhd, an engineering firm, and George Kent (M) Bhd — despite the fact that it was the third-highest bidder and was in fact nearly RM1.62 billion higher than the UEM consortium, owned  by the state investment fund Khazanah and a full RM2 billion higher than the lowest bidder, whose name hasn’t been revealed. 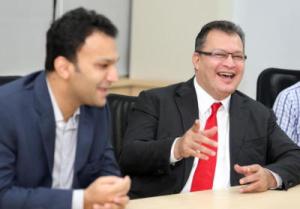 The new major shareholder and Group Managing Director of Malaysian Resources is (Tan Sri) Mohamad Salim Fateh Din (above). His son, Mohd Imran, is Executive Director. Salim is a close friend of Prime Minister Najib Razak’s, Rosmah Mansor.  Malaysian Resources has never done a rail project. Its expertise is in construction, not rail.

George Kent (M) Bhd. is headed by Tan Kay Hock, 67, who has bragged that he has been a golfing buddy of Najib’s for 25 years. His wife is said to be close to Rosmah and reportedly accompanies her overseas on shopping trips. In addition to George Kent, he is also chairman and CEO of his umbrella company Johan Holdings Bhd. 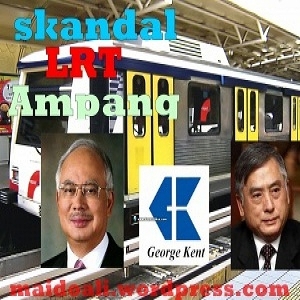 George Kent won a similar contract to construct the RM1.1 billion Ampang light rail extension project in 2012 despite the fact that for the previous 76 years, the company was known as a minor-grade manufacturer and supplier of water meters with an annual income of RM 30 million. Tan denied at that point that George Kent won the contract because of his links to the Prime Minister. The project’s completion was delayed by a year although George Kent officials said it wasn’t their fault.

Malaysia is notorious for this kind of crony capitalism. In 2014, before he was jailed on what many consider spurious sexual abuse charges, opposition leader Anwar Ibrahim calculated that more than 80 percent of the country’s richest businessmen – both Malay and Chinese – owe what Anwar called “a significant portion of their wealth and success to who they know, instead of what they know.” In 2014, The Economist ranked Malaysia third in its world rankings behind Russia and Hong Kong for the extent to which businessmen linked to government handouts owed their fortunes.

Anwar blamed former PM Mahathir Mohamad for the rise of crony capitalism, with some justification. Much of it came as the former prime minister sought to create an entrepreneurial class of Malay businessmen.  At least 23 of Malaysia’s biggest companies were connected to UMNO, run by chief executives who made fortunes in a system designed to siphon away vast amounts of money in government contracts. However, many top Chinese businessmen also owe their fortunes to the process including Vincent Tan, who became one of the country’s richest men on the back of a contract awarded by Mahathir for sports gaming. Others include  the families of Lim Goh Tong, Yeoh Tiong Lay, Syed Mokhtar Al-Bukhary and Ananda Krishnan, who mostly built their fortunes through Mahathir’s actions.

“George Kent has never built anything like this,” said a longtime local businessman in Kuala Lumpur. “UEM is the biggest infrastructure concern in Malaysia. It is government-owned. Its bid was far lower than George Kent’s. This makes no sense.”

A government-linked company that was considered a vehicle to raise money for the United Malays National Organization through infrastructure contracts, UEM was one of a stable of companies that fell on hard times after the 1997-1998 Asian Financial Crisis including Malaysian Airline System, the national flag carrier and light rail transit operators Projek UsahasamaTransit Ringan Automatik Sdn Bhd (PUTRA) and Sistem Transit Aliran Ringan Sdn Bhd. All were taken over by an asset-management company to clean up nonperforming debt and brought under the wing of Khazanah.

Whatever its precarious finances, UEM group has an undeniable record of construction success. It has built infrastructure projects including expressways, bridges, buildings, urban transits, water infrastructure, airports, hospitals, township and property development. It also has asset and facility management services.

The system George Kent will be called upon to build is extensive. The 36-km. line will include 25 stations along the route. The line, if completed as expected, is expected to serve 2 million people in the Klang Valley, transporting as many as 70,000 passengers per day.

Despite the price discrepancy of nearly 20 percent over the lowest bidder, the project owner, Prasarana Malaysia, told the Malaysian Insider the project is within the price range it established. Executive director Imran Salim of Malaysian Resources told the website the company had also offered a package options to carry out the project.

“We provide estimates, and then we gave them options. For instance if the government wanted it ready six months ahead of schedule, we will give them an option with additional machinery and manpower at a certain pricing. We gave many options (to choose from),” Salim told The Malaysian Insider in an exclusive interview.

15 thoughts on “Malaysia: Crony Capitalism alive and well with Najib”