The Original Colonists
‘The Social Conquest of Earth,’ by Edward O. Wilson

This is not a humble book. Edward O. Wilson wants to answer the questions Paul Gauguin used as the title of one of his most famous paintings: “Where do we come from? What are we? Where are we going?” At the start, Wilson notes that religion is no help at all — “myth making could never discover the origin and meaning of humanity” — and contemporary philosophy is also irrelevant, having “long ago abandoned the foundational questions about human existence.”

The proper approach to answering these deep questions is the application of the methods of science, including archaeology, neuroscience and evolutionary biology. Also, we should study insects.

Insects? Wilson (right), now 82 and an emeritus professor in the department of organismic and 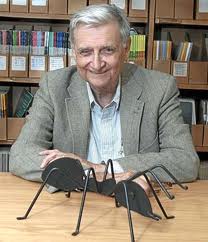 evolutionary biology at Harvard, has long been a leading scholar on ants, having won one of his two Pulitzer Prizes for the 1990 book on the topic that he wrote with Bert Hölldobler. But he is better known for his work on humans.

His “Sociobiology: The New Synthesis,” a landmark attempt to use evolutionary theory to explain human behavior, was published in 1975. Those were strange times, and Wilson was smeared as a racist and fascist, attacked by some of his Harvard colleagues and doused with water at the podium of a major scientific conference. But Wilson’s days as a pariah are long over.

An evolutionary approach to psychology is now mainstream, and Wilson is broadly respected for his scientific accomplishments, his environmental activism, and the scope and productivity of his work, which includes an autobiography and a best-selling novel, ­“Anthill.”

In “The Social Conquest of Earth,” he explores the strange kinship between humans and some insects. Wilson calculates that one can stack up log-style all humans alive today into a cube that’s about a mile on each side, easily hidden in the Grand Canyon. And all the ants on earth would fit into a cube of similar size.

More important, humans and certain insects are the planet’s ­“eusocial” species — the only species that form communities that contain multiple generations and where, as part of a division of labor, community members sometimes perform altruistic acts for the benefit of others.

Wilson’s examples of insect eusociality are dazzling. The army ants of Africa march in columns of up to a million or more, devouring small animals that get in their way. Weaver ants “form chains of their own bodies in order to pull leaves and twigs together to create the walls of shelters. Others weave silk drawn from the spinnerets of their larvae to hold the walls in place.” Leafcutter ants “cut fragments from leaves, flowers and twigs, carry them to their nests and chew the material into a mulch, which they fertilize with their own feces. On this rich material, they grow their principal food, a fungus belonging to a species found nowhere else in nature. Their gardening is organized as an assembly line, with the material passed from one specialized caste to the next.”

There are obvious parallels with human practices like war and agriculture, but Wilson is also sensitive to the differ­ences. The social insects evolved more than 100 million years ago; their accomplishments come from “small brains and pure instinct”; and their lengthy evolution has led them to become vital elements of the biosphere.

In contrast, Homo sapiens evolved quite recently; we have language and culture; and the consequences of our relatively sudden domination have been mixed, to put it mildly: “The rest of the living world could not coevolve fast enough to accommodate the onslaught of a spectacular conqueror that seemed to come from nowhere, and it began to crumble from the pressure.” 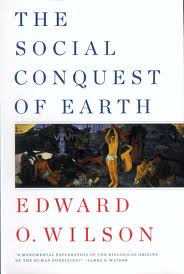 This book offers a detailed reconstruction of what we know about the evolutionary histories of these two very different conquerors. Wilson’s careful and clear analysis reminds us that scientific accounts of our origins aren’t just more accurate than religious stories; they are also a lot more interesting.

But Wilson also makes some radical claims about the origins of our eusocial natures. For ants, he argues that workers are “robotic extensions of the mother’s genome,” so their eusociality is explained through the standard process of natural selection, in which single colonies are akin to single animals. But this won’t work for us; unlike insects, all humans compete for reproductive resources. So how did we get to be such social animals?

One solution is kin selection, as developed by William Hamilton and extended by Richard Dawkins in his discussion of “the selfish gene.” The idea is that from the perspective of the gene there is no hard-and-fast difference between an animal’s interest and the interest of its kin, and hence a gene that guides an animal to help its relatives could spread through the population even if this helping was costly to the animal itself.

The story, most likely apocryphal, goes that the biologist J. B. S. Haldane was asked if he would give his life to save his drowning brother, and he responded that he wouldn’t, but he would happily do it for two brothers or eight cousins. That’s the logic of kin selection.

Wilson was once a proponent of this view, but in a 2010 article in Nature, written with his Harvard colleagues Martin Nowak and Corina Tarnita, he argued against it — for insects and for humans. Their attack was controversial, to say the least, and there were outraged responses in a later issue of that journal, including one with 137 authors.

Wilson’s favored alternative theory for the evolution of eusociality is group selection. The notion is that a gene for helping behavior can thrive even if it’s disadvantageous for the individual — so long as it gives the individual’s group an advantage over other groups. Darwin provided a nice example of this, imagining two tribes in conflict and noting that “if . . . the one tribe included a great number of courageous, sympathetic and faithful members, who were always ready to warn each other of danger, to aid and defend each other, this tribe would succeed better and conquer the other.”

Now, group selection has long been controversial; many scholars believe that while it is possible in principle, it is far weaker than standard within-group selection. Wilson himself says that eu­sociality is rare precisely because “group selection must be exceptionally powerful to relax the grip of individual selection.” But it might play some role in human evolution. The economist Samuel Bowles, for instance, has persuasively argued that the propensity to give one’s life in battle — the ultimate example of eusociality — might emerge because of the powerful advantage this gives to a warring community.

Wilson’s own theory is far too extreme, though. He adopts a Manichaean view of evolution, in which group selection is responsible for all of our virtues (“honor, virtue and duty”), while individual selection produces nothing but sin (“selfishness, cowardice and hypocrisy”). But it’s long been known that unrelated individuals can benefit from repeated cooperation with one another, so long as there are mechanisms in place to encourage reciprocity and punish betrayal.

There is now evidence — from computational modeling, observations of real-world human interactions and laboratory studies — showing that our altruistic and eusocial choices are sensitive to past interactions with individuals and that we are inclined to reward cooperators and punish cheats and free-riders. This evidence suggests that group conflict is not the sole force that has shaped human eusociality. Wilson must be familiar with this research, but doesn’t acknowledge how it complicates his account.

Sandwiched between his discussion of evolution and a concluding statement called “A New Enlightenment” is a series of chapters on language, culture, morality, religion and art. This section is intended to answer the “What are we?” question, but it is disappointing. Each chapter is only about a dozen pages and mainly summarizes the proposals of other scholars. While Wilson is never boring, there are few new insights here. The feeling you get recalls a remark once made by Roger Ebert about an artsy horror movie: there is foreboding and there is after boding, but no actual boding.

Wilson ends his chapter on morality with some ideas as to how evolutionary theory can inform our moral understanding. He argues that the papal ban on artificial contraception is based on a misunderstanding of evolution. Sex didn’t evolve just for reproduction; rather, “continuous and frequent intercourse . . . is genetically adaptive: it ensures that the woman and her child have help from the father.” Similarly, the condemnation of homosexuality is unreasonable because homosexuality is also likely to be a biological adaptation: “Homosexuality may give advantages to the group by special talents, unusual qualities of personality, and the specialized roles and professions it generates.”

Well, maybe, but Wilson never explains why these evolutionary hypotheses should influence our moral judgments. Suppose it turns out that he is mistaken and sex did evolve solely for reproduction. Would this show that non-procreative sex acts really are sins? Hardly.

Wilson goes on to claim that there are some ethical precepts that “all will agree should be opposed everywhere without exception,” and his list includes slavery and genocide. But actually the wrongness of these acts is a relatively recent discovery (the Bible, for instance, approves of both of them). And from the group selection view Wilson himself favors, an appetite for genocide — the destruction of one group by another — can be seen as the ultimate biological good. Our understanding that genocide is a monstrous act illustrates the limits of evolutionary theory as a grounding for morality.

I agree with Wilson that evolutionary theory has some relevance to how we should live our lives. But the connections are subtle, and here, at least, Wilson is too quick to dismiss philosophy and allied disciplines when it comes to answering the questions that matter the most.

Paul Bloom is a professor of psychology at Yale and the author of “How Pleasure Works.” He is writing a book about the development of morality.

A version of this review appeared in print on May 13, 2012, on page BR30 of the Sunday Book Review with the headline: The Original Colonists.

7 thoughts on “Eusociality? A Review of Edward O Wilson’s The Social Conquest of Earth”