COMMENT: This is the tradition observed by politicians in South

Korea, Japan, those in Europe and elsewhere but not in Malaysia. Our Ministers cling to their posts shamelessly. There is no sense of remorse and public accountability. The acting Malaysian Minister of Transport,for example, remains in his post despite the Genting Highlands bus tragedy and MH370 disaster. He is also Minister of Defence and was a former Home Affairs Minister when the ragtag army of the Sultan of Sulu invaded Lahad Datu, Sabah. Why? –Din Merican 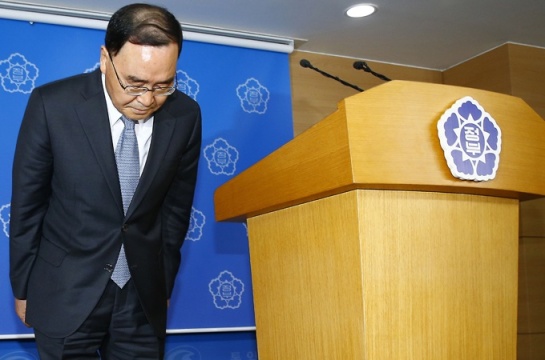 “I offer my apology for having been unable to prevent this accident from happening and unable to properly respond to it afterwards,” he said. “I believe I, as the Prime Minister, certainly had to take responsibility and resign.”

The Sewol ferry sank on a routine trip south from the port of Incheon to the traditional holiday island of Jeju.

The Sewol ferry, weighing almost 7,000 tons, sank on a routine trip from the port of Incheon, near Seoul, to the southern holiday island of Jeju. Investigations are focused on human error and mechanical failure.

The government, along with almost all of its branches, has come under fierce criticism over the disaster, and the handing of the rescue operation. Chung said that he wanted to resign earlier, but had given the situation “first priority,” adding that he did not want to be “any burden to the administration”.

More than 300 people, most of them students and teachers from one high school on a field trip, have died or are missing and presumed dead.

The children were told to stay put in their cabins, where they waited for further orders. The confirmed death toll on Sunday was 187.

All 15 surviving crew members responsible for sailing the vessel are now in custody and face charges ranging from criminal negligence to abandoning passengers.

Tempers have frayed over the slow pace of the recovery and frequent changes in information provided by the government.