The CEOs of Davos were euphoric this year about the return to growth, strong profits, and soaring executive compensation. Economists reminded them that this growth is not sustainable, and has never been inclusive; but in a world where greed is always good, such arguments have little impact

..,the lessons of history are clear. Trickle-down economics doesn’t work. And one of the key reasons why our environment is in such a precarious condition is that corporations have not, on their own, lived up to their social responsibilities. Without effective regulations and a real price to pay for polluting, there is no reason whatsoever to believe that they will behave differently than they have..–Joseph E. Stigltz

DAVOS – I’ve been attending the World Economic Forum’s annual conference in Davos, Switzerland – where the so-called global elite convenes to discuss the world’s problems – since 1995. Never have I come away more dispirited than I have this year. 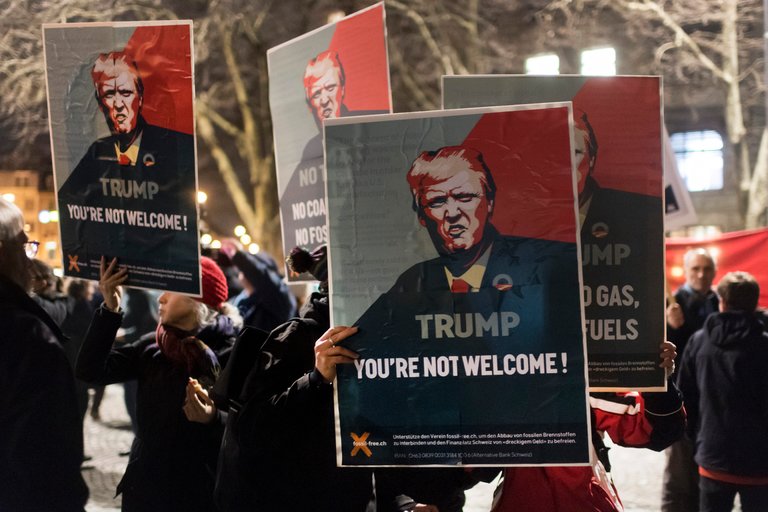 Demonstrators in Zurich this week. While many are poised to recoil at President Trump’s arrival in Davos this week, much of the moneyed elite there are willing to overlook what they portray as the president’s rhetorical foibles in favor of the additional wealth he has delivered to their coffers. Credit Ennio Leanza/European Pressphoto Agency.

The world is plagued by almost intractable problems. Inequality is surging, especially in the advanced economies. The digital revolution, despite its potential, also carries serious risks for privacy, security, jobs, and democracy – challenges that are compounded by the rising monopoly power of a few American and Chinese data giants, including Facebook and Google. Climate change amounts to an existential threat to the entire global economy as we know it.

Perhaps more disheartening than such problems, however, are the responses. To be sure, here at Davos, CEOs from around the world begin most of their speeches by affirming the importance of values. Their activities, they proclaim, are aimed not just at maximizing profits for shareholders, but also at creating a better future for their workers, the communities in which they work, and the world more generally. They may even pay lip service to the risks posed by climate change and inequality.

But, by the end of their speeches this year, any remaining illusion about the values motivating Davos CEOs was shattered. The risk that these CEOs seemed most concerned about is the populist backlash against the kind of globalization that they have shaped – and from which they have benefited immensely.

Not surprisingly, these economic elites barely grasp the extent to which this system has failed large swaths of the population in Europe and the United States, leaving most households’ real incomes stagnant and causing labor’s share of income to decline substantially. In the US, life expectancy has declined for the second year in a row; among those with only a high school education, the decline has been underway for much longer.

Justin Trudeau of Canada and Narendra Modi of India–The Globaists at Davos 2018 who together with Germany’s Angela Merkel, Emmanuel Macton of France and China’s Xi Jinping will make America First’s Donald Trump irrelevant.

Not one of the US CEOs whose speech I heard (or heard about) mentioned the bigotry, misogyny, or racism of US President Donald Trump, who was present at the event. Not one mentioned the relentless stream of ignorant statements, outright lies, and impetuous actions that have eroded the standing of the US president – and thus of the US – in the world. None mentioned the abandonment of systems for ascertaining truth, and of truth itself.

Indeed, none of America’s corporate titans mentioned the administration’s reductions in funding for science, so important for strengthening the US economy’s comparative advantage and supporting gains in Americans’ standard of living. None mentioned the Trump administration’s rejection of international institutions, either, or the attacks on the domestic media and judiciary – which amounts to an assault on the system of checks and balances that underpins US democracy.

No, the CEOs at Davos were licking their lips at the tax legislation that Trump and congressional Republicans recently pushed through, which will deliver hundreds of billions of dollars to large corporations and the wealthy people who own and run them – people like Trump himself. They are unperturbed by the fact that the same legislation will, when it is fully implemented, lead to an increase in taxes for the majority of the middle class – a group whose fortunes have been in decline for the last 30 years or so.

Even in their narrowly materialistic world, where growth matters above all else, the Trump tax legislation should not be celebrated. After all, it lowers taxes on real-estate speculation – an activity that has produced sustainable prosperity nowhere, but has contributed to rising inequality everywhere.

The legislation also imposes a tax on universities like Harvard and Princeton – sources of numerous important ideas and innovations – and will lead to lower local-level public expenditure in parts of the country that have thrived, precisely because they have made public investments in education and infrastructure. The Trump administration is clearly willing to ignore the obvious fact that, in the twenty-first century, success actually demands more investment in education

For the CEOs of Davos, it seems that tax cuts for the rich and their corporations, along with deregulation, is the answer to every country’s problems. Trickle-down economics, they claim, will ensure that, ultimately, the entire population benefits economically. And the CEOs’ good hearts are apparently all that is needed to ensure that the environment is protected, even without relevant regulations.

Yet the lessons of history are clear. Trickle-down economics doesn’t work. And one of the key reasons why our environment is in such a precarious condition is that corporations have not, on their own, lived up to their social responsibilities. Without effective regulations and a real price to pay for polluting, there is no reason whatsoever to believe that they will behave differently than they have.

The Davos CEOs were euphoric about the return to growth, about their soaring profits and compensation. Economists reminded them that this growth is not sustainable, and has never been inclusive. But such arguments have little impact in a world where materialism is king.

So forget the platitudes about values that CEOs recite in the opening paragraphs of their speeches. They may lack the candor of Michael Douglas’s character in the 1987 movie Wall Street, but the message hasn’t changed: “Greed is good.” What depresses me is that, though the message is obviously false, so many in power believe it to be true.