Open champion Francesco Molinari will take a two-shot lead over Tiger Woods and Tony Finau into the final round of the Masters at Augusta National.

Italian Molinari holed four successive birdies on the second nine to card a 66 and finish on 13 under as he looks to win a second major.

Woods, who won the last of his four Green Jackets in 2005, had a five-under 67 to move second with fellow American Finau, who was one of three players to hit a sensational 64.

Three-time major winner Brooks Koepka is a shot further back after a 69, while England’s Ian Poulter carded a 68 to remain in the hunt at nine under.

Tee times for Sunday’s final round have been brought forward because of anticipated thunderstorms. Players will be grouped in threesomes, with the first group set to start at 12:30 BST.

“Usually the reward for playing hard and doing all the things correctly, you get a nice little sleep-in come Sunday, but that’s not the case,” Woods said.

“We’ve got to get up early and get after it. It will be interesting to see if that wind comes up like it’s forecast – 15-20mph around this golf course is going to be testy.”

There will be uninterrupted live coverage of the final day on BBC Two from 13:55 BST, with additional coverage starting at 12:30 online.

Molinari went quietly about his business, making two birdies on the first nine, and a run of four from the 12th on the second nine. The roars were appreciative, rather than loud.

The 36-year-old Italian’s previous best Masters finish was a tie for 19th back in 2012 but he has now gone 43 holes without dropping a shot, and that is champion material.

He did not make a bogey in his final 37 holes when he won The Open at Carnoustie last July. He played with Woods in the final round there but playing with Woods at Augusta, even with a two-shot start, will be a very different challenge.

Molinari, who also beat Woods three times alongside Tommy Fleetwood in the 2018 Ryder Cup, said: “I wish I only had to worry about him but there are a few more that are going to try to shoot a low round so it’s going to be exciting.

“I played slightly better on Friday but mentally I was very good.

“There were two big putts on four and five to save pars and I played the back nine as well as I’ve played it. And then there was a good par save on 18, it was nice to keep another clean scorecard.” 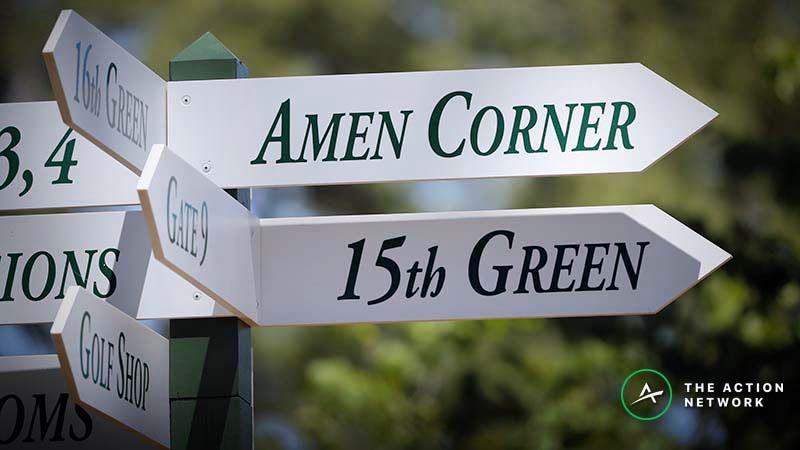 Woods parred the first four holes before dropping a shot at the newly extended par-four fifth for the third day running.

However, three birdies at the next three holes got the 14-time major winner, and the patrons, interested. The roar that greeted his next birdie at the par-five 13th echoed across the course.

Patrons were still streaming down the hill on the 15th when he holed a short birdie putt, after a deft chip from the back of the green. The volume that greeted that was up a further notch.

Those without seats shuffled round to the 16th green, hundreds jammed in to a tiny corner. Most can’t have seen the tee shot, fewer still where it landed but the ear-splitting whoops and hollers told you it was close.

They say there is no roar like a Tiger roar at Augusta. And the one that followed his tap-in birdie at 16 reverberated around the Georgia pines. Nobody on the course could have missed that one.

This is the fifth time Woods has shot 205 or fewer after three rounds at the Masters. He won the previous four.

Woods said he gave himself a talking to between the fifth green and sixth tee. “It was simple,” he explained. “Just be patient and let the round build. The goal was to make sure I got to double digits and I did that.

“It’s been a while since I’ve been in contention here, but then again the last two majors counts for something,” said Woods, who briefly led on the final day of the 2018 Open and finished runner-up to Koepka in the 2018 US PGA Championship.

Finau finished joint 10th last year despite dislocating his ankle when celebrating a hole-in-one during the par-three contest.

There were no such exuberant celebrations on Saturday, despite the 29-year-old opening his round with three successive birdies. Another birdie followed on the sixth before an eagle on the eighth took him right into the mix on nine under.

He narrowly missed a birdie putt on the ninth that was to set a new record of 29 strokes for the first nine.

And like many, he took advantage of the two par fives on the second nine to improve his score to 11 under, on a day of hot sun, light wind and low scoring all round.

‘Best golf ever seen at Augusta’

The 65 players to make the cut scored a cumulative 80 under par, which is thought to be the lowest scoring on a single day at the Masters.

“There has been some amazing golf today with three 64s,” said BBC Sport expert Ken Brown. “We have seen some of the best golf I have ever seen at Augusta.”

And BBC commentator Peter Alliss added: “They played some shots today that I can’t believe. I think ‘you can’t reach this hole with a driver, a seven or an eight iron’ but they do.”

‘The oldies are doing not so bad’ – Poulter

Poulter, who was playing with fellow 43-year-old Woods, opened with seven pars and two birdies and holed three more on his second nine, his only bogey coming on the 11th.

It was a terrific round from Poulter considering he also had to deal with being in the bubble of a super-charged Augusta crowd who are willing Woods to break his decade-long major drought.

“It’s always loud when Tiger makes birdies, but when you’re in contention at the Masters you’d probably pick Tiger Woods to play alongside. He was good fun to play with,” said Poulter.

“The oldies are doing not so bad, so I might have a 3.5% chance now,” he added, referring to a stat he said he heard on television that players aged 43 have only a 3% chance of winning the Masters.

Webb Simpson, the 2012 US Open champion, was another of the three to post a 64 – one shot off the course record jointly held by Nick Price and Greg Norman – as he moved to nine under, level with Poulter.

They will play the final round with Koepka who had four bogeys in a 69.

World number two Dustin Johnson is among five players on eight under after a 70, while Rickie Fowler shot 68 to reach seven under.

England’s Fleetwood had a solid 70 to move to four under, alongside 2015 Masters champion Jordan Spieth who has picked up seven shots in two rounds following an opening 75.

But Northern Ireland’s Rory McIlroy told BBC Sport he made “too many mistakes” as his hopes of winning a first Masters title disappeared with a one-under 71 that left him one under par for the tournament.