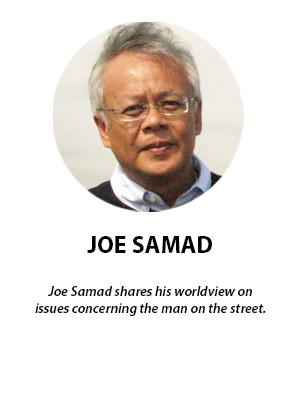 Even if we already know this, statements like this, coming from Daim who is close to the centre of power, do not help Pakatan Harapan’s (PH) image.

Disgruntled voters are saying in derogatory terms that the PH government is a one-term government. The honeymoon is long over and the feel-good factor is disappearing over the horizon. If people power could boot out decades of Barisan Nasional (BN) rule, it can do the same with the current government in the next general election. People now know that they can change governments by the collective power of their votes.

Plastic tanks do not deteriorate and the kampung folk who were given the blue water tanks in GE-13 received the same in GE-14. What the people wanted was clean piped water and good roads, not another round of blue water tanks with a BN logo. Whenever you see huge truckloads heading for the rural areas, you know it’s election time.

While there are thousands of examples of BN’s arrogance and treating people like idiots, the same is being repeated by the PH government.

Bersih said Idris’ promise to sponsor two goats for a feast in Taman Angsamas in the Angsamas polling district during a ceramah was tantamount to bribery.

The poor goats are now being used for election bribery. For Arians like me, it’s the greatest insult. The goat is the eighth in the 12-year cycle of the Chinese system. People born in a year of the goat are generally believed to be gentle, mild-mannered, shy, stable, sympathetic, amicable, and brimming with a strong sense of kindheartedness and justice. Being made the sacrificial lamb in a by-election is the greatest insult to the goat’s reputation.

Have we not “goat” better things to say and do? Does the constituency not have any real issues such as the need for better schools or more jobs? You are not talking about hundreds of goats for the slaughter, but two. Are we bankrupt of ideas? The voters deserve better.

If it’s not about a goat, it’s about race and religion. The goat was a short respite in an idiotic race to the finishing post.

PKR president Anwar Ibrahim has expressed hope that Rantau voters will not let Dr S Streram Sinnasamy’s race be an issue in the coming by-election and that they will see him for the work he has done.

“Why are we shunning him just because he is an Indian?” asked Anwar before reminding voters of all the good work he had done for the people. So now the election boils down to an Indian and two goats. In an idiot’s narrative, the story ends when humans devour the goat in a celebratory feast. But is that the end of the story?

It was reported that former prime minister Najib Razak has been slapped with an extra tax bill of around RM1.5 billion by the Inland Revenue Board (LHDN). A financial daily quoted sources which said that a letter was sent to Najib by LHDN over backdated tax amount for the years 2011 to 2017. LHDN’s investigation assessment showed that Najib had not declared taxable income of close to RM4 billion for the period. Why is Najib not the main by-election issue? Why is “Bossku” still roaming freely?

Parliament is not spared the Malaysian idiocy. Recently, the entire opposition staged a walkout after a heated shouting match during Finance Minister Lim Guan Eng’s winding-up speech in the second reading of the Supplementary Supply Bill 2019.

The walkout was triggered after a shouting match between the opposition, the finance minister and government backbenchers, after Pengkalan Chepa MP Ahmad Marzuk Shaary (PAS) called Lim “pondan”. The Malaysian narrative has expanded to an Indian doctor, two goats and “pondan”.

Labelling someone as “pondan” or LGBT could have serious consequences if Lim were to visit shariah-compliant nations such as Brunei. But our tourism minister saved the day for Lim.

According to media reports, Mohamaddin Ketapi denied the existence of LGBT people in the country. Ahead of attending the ITB Berlin travel fair, he told German reporters that he wasn’t aware of LGBT people in Muslim-majority Malaysia.

Yes, we are all being treated like idiots. Could it be that we elected idiots to represent us in the first place?

The views expressed are those of the writer and do not necessarily reflect those of FMT.

3 thoughts on “For Kambing’s sake!”