What are the real reasons for not ratifying the Rome Statute

QUESTION TIME | I am not confused at all – not one little tiny bit – about the Rome Statute of the International Criminal Court. But I am utterly confused about the reason why Prime Minister Dr. Mahathir Mohamad said the cabinet won’t ratify the statute – the people are confused about it.

I don’t for a moment think the Malaysian people as a group are stupid – if they were, Najib Abdul Razak would still be prime minister and strutting around going about his business of running the government and stealing when the opportunity arises, while Mahathir remained in opposition.

Let’s not insult the Malaysian people – the bumiputera (including the Malays), Chinese, Indians and everybody else who collectively booted out the previous government. Yes, yes, I know, this government does not have the majority support of the Malays.

But remember, most Malays voted for the opposition in GE14, which included Harapan and PAS. And remember too, neither UMNO nor PAS had the majority Malay support. But the majority of Malays wanted UMNO out. That counts for more.

“The jurisdiction of the Court shall be limited to the most serious crimes of concern to the international community as a whole. The Court has jurisdiction in accordance with this Statute with respect to the following crimes: (a) The crime of genocide; (b) Crimes against humanity; (c) War crimes; (d) The crime of aggression.”

It goes on to state what these kinds of crime are. Only when these acts are committed would the Rome Statute kick in for any country which has ratified the statute. There is no question that members of the monarchy will not be affected by state actions as Malaysia is a constitutional monarchy.

Unless members of the Royalty commit the acts themselves, they will not be affected.

This is the position of the government and of constitutional experts, such as Shad Saleem Faruqi who dismissed fears of ratification thus: “These fears are absolutely unfounded and bereft of logic, and appear to be based on advice that is motivated by politics, not law, emotion, not reason. The advice misleads Their Majesties and paints Their Royal Highnesses in a bad light.”

It appears that the fears of the royalty over the ratification may have resulted from a paper which was presented to them by some academics. But why would the rulers just rely on such narrow advice and not engage the government and other experts?

However, Mahathir talked about a plan using the royalty to overthrow him – but he was not clear about where and how that would be carried out.

Uncharacteristically, despite agreeing that there was nothing wrong in ratifying the Rome Statute, Mahathir announced a withdrawal from the earlier commitment.

“The whole idea is to get royalty in Malaysia to go against the government. That is the motive. Because of that conclusion, we have made a decision not to recognise (the Rome Statute). We have ratified it, but still have time to withdraw. It is not because it is harmful to us, but because of the political confusion raised,” he said.

Why not just explain the situation and ratify it anyway?

A full transcript of Mahathir’s press conference reveals his thinking in respect of this. Here are extracts: “But having said all that against the Statute of Rome, we understand that this is a political move. A political move to get the rulers to back them up.

“Of course, some members of the royal family also may be involved, but the whole idea is to get the Royalty in Malaysia to go against this government. That is the motive.

“But because of this confusion, and the confusion also among the rulers, we have made a decision that we will not recognise the Statute of Rome. We have ratified it, but we still have time to withdraw, and we will withdraw.

“Not because the Statute of Rome is harmful to us, but because of the political confusion raised by some people, including some people who have some political ambition. We know this.

“Jadi kita punya keputusan kabinet this morning is that we will withdraw our ratification of the Statute of Rome kerana confusion, bukan kerana we believe it is going to be bad for us, but because of the confusion created by one particular person who wants to be free to beat up people and things like that. And if he beats up people again, I will send the police to arrest him, I don’t care who he is.”

The last paragraph is an oblique reference to members of the royalty who may have been involved in violent acts in the past. He continues:

“So, while we will withdraw our ratification of the Statute of Rome, it is not because we think it is harmful to our country, but it is because of the politics of this country where sometimes people are easily misled by emotional feelings, that what we are doing is against our own interest.

“So that is the true reason I have to explain to you.

“And I would like to say this of these cowards, who during the last regime saw Najib stealing money, doing all kinds of things, and they said nothing. There were a lot of cowards who want to benefit from Najib’s misrule so that they also can benefit.

“I am saying this directly at them. Who they are, you can guess. But that is the reason why they were silent then, but sekarang ni wah bukan main lagi jaguh nak pertahankan hak orang Melayu, kononnya.” 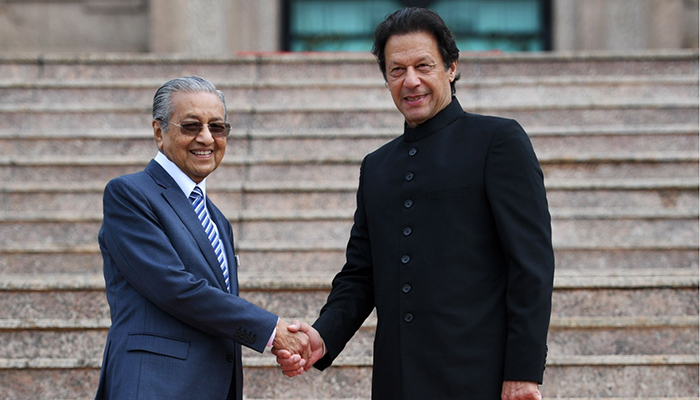 OK, understood. There was a plan to overthrow Mahathir and to get the royalty behind that plan using the ratification of the Rome Statute. But who was behind this plan? How far advanced was it? And how were they were going to do it? The public deserves to know the answers to determine what were the threats to democracy and how serious they were.

Why succumb to these pressures like this? Surely that will embolden them and make them even more demanding in future and try to confuse the public even more.

The best thing to have done is to convince the public by clear argument why there is nothing wrong with endorsing the Rome Statute and then go ahead and ratify it, even if the royalty objects.

The government and the larger public cannot be held to ransom by the dark side or the deep state, whatever that may be. Foreign Minister Saifuddin Abdullah had talked about a vague deep state which may overthrow a democratically-elected government through undemocratic means, implying a coup.

This is a very serious allegation. It is incumbent upon this government to get to the root of the matter and establish if there is any such move to overthrow the government and bring the perpetrators to book. We are talking about treason here, nothing else.

If no such evidence is forthcoming, then members of the government should stop such fear-mongering and go on about the business of running the country efficiently, honestly and with regard to all citizens, keeping as much as possible the promises they made during the last election campaign.

I fail to see how the withdrawal of the commitment given to the Rome Statute will stop those who want to overthrow the country through unconstitutional means. It will only give them greater courage to continue doing what they are doing.

I still do not understand the reasons for the Harapan government abandoning the Rome Statute. I suspect a lot of us don’t.

P GUNASEGARAM says when things are not what they seem, something else is happening somewhere else.