I first noticed the name Kee Thuan Chye in the pages of the National Echo in the 1980s. He wrote about stuff that we categorise under “arts”.

I would skim the first few paragraphs to see if it would be worth reading. Often, his pieces would be spread over two pages. And although I was working in Penang at that time, I don’t remember meeting him then.

I really took notice of him, I must admit, not because of his writing but because of the names he had given his two children. I heard from a friend that they were named Soraya Sunitra Kee Xiang Yin and Jebat Arjuna Kee Jia Liang. 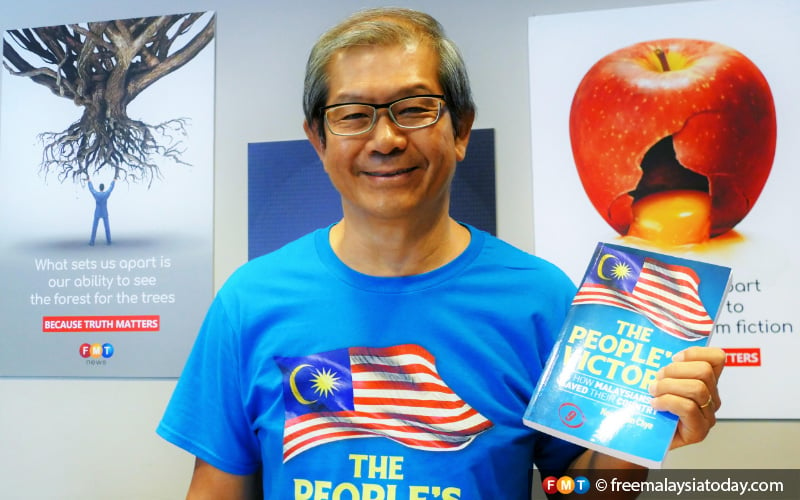 This guy wanted his children to identify themselves as Malaysians and, like the dramatist that he is, he did it – with flourish. Kee, I am certain, wanted to show he was a Malaysian not just by citizenship but also by his action.

And you can feel that Malaysianness in his latest book “The Peoples Victory: How Malaysians Saved Their Country.” The book is about one of the most momentous events in the life of the country – how voters rose up to kick out the long-ruling Barisan Nasional government against all odds on May 9, 2018.

I just finished reading the book recently, and it is chock-full of facts, opinions and emotions. Some of his sentences are very daring, too.

However, if you are interested in an unbiased, intellectual, political analysis of the 14th general election and events leading up to it, or an academic analysis of the BN’s loss and Pakatan Harapan’s win, this book may not be for you.

It is a simple story told in a simple, conversational style by an excited playwright who just realises that he and a host of like-minded people have just accomplished the impossible.

You will also find many ordinary Malaysians – some known to us, such as Zunar, and others who may not have made it into the book if not for their tweets or for galvanising people to come and vote. It includes such people as Sim Yen Peng who gave his Sabah and Sarawakian workers three days paid leave and air tickets to go back to vote, student Arveent Kathirtchelvan who started a petition addressed to the Yang di-Pertuan Agong for May 9 to be declared a holiday, Nizam Bakeri who started #CarpoolGE14 and Izzah Azura who started a Facebook crowdfunding platform to help those who needed money to travel home to vote.

This is also not a book by a man looking from the mountain with a wide, unattached perspective. No. Kee is not only telling the story, he is also in it – expressing his frustration and jubilation, recounting his earlier writings, and narrating his participation in Bersih rallies.

Kee is also unabashedly on the side of those wanting to replace the BN government. He is against the BN not because it is the BN but because its policies and actions over the years have divided Malaysians and eroded freedoms. And being a Malaysian – remember the names he gave his children? – Kee is angry and wants to set things right.

In fact, he told FMT, on April 4, 2018, just before the general election, that if the BN were to win with a huge majority, the rights of citizens would be further repressed.

“If BN gets its two thirds, that’s the end of Malaysia. It will bulldoze through anything it wants and the only reforms we’re going to see are reforms that will make the system work to BN’s benefit.”

In this, Kee was merely echoing the feelings of educated, urban Malaysians for whom freedoms are important.

Kee is also not a political writer, and, as far as I am aware, he has not worked in the news section of any newspaper, only the arts-related sections.

However, he still retains enough of his journalistic sense to provide balance when commenting on the words or actions of BN and PH leaders and when unfurling events in the book which he divides into three parts or acts, as he prefers to call them.

“On May 5, 2013, hopes ran high that by the end of the day Malaysia would have a change of government.” He goes on to describe how the BN managed to win the 13th general election even though it lost the popular vote, and the rallies and events that followed.

It ends with the words: “If there was one word to describe the mood of the people at this point, it would have to be: Despair.”

Even though I knew Malaysians had succeeded in removing a repressive government, I read Act 3 titled “Euphoria” to find out. It starts with the words, “May 9 for a lot of people is a do-or-die day”, and goes on to talk about election night and a little of what transpired after that.

The curtain closes with these words: “So this was not just Mahathir’s victory, or Anwar’s or Kit Siang’s, or Mat Sabu’s or Guan Eng’s. This was a victory of the people. A victory of the Malaysian people.”

It reflects my sentiments too. In fact, two days after the general election, I had written that the real winners were the voters and that Malaysians had found their guts.

And guts is something Kee has plenty of. I have seen him speak up at the New Straits Times office, when we both worked at the Kuala Lumpur headquarters. If you read his books, especially this book, you will know that he is not afraid to speak his mind, and that he feels strongly about playing his role as a responsible Malaysian for the good of the nation.

And yes, I had named the Malaysian voter the Person of the Year for 2018 for finding his/her guts and ushering in a new era.

A Kathirasen is an executive editor at FMT.

The views expressed by the writer do not necessarily reflect those of FMT.

One thought on “The trials and triumphs of GE14, as seen by Kee Thuan Chye”