On March 18, Indonesia’s Finance Minister Sri Mulyani Indrawati announced that the country’s Directorate General of Taxation will go after Indonesian wealth parked overseas, saying data indicate Indonesians have illegally moved Rp1.3 quadrillion (US$91.3 billion) worth of assets outside of the country.

Sri Mulyani doesn’t have far to hunt, and multiple sources say her US$91 billion figure is a relatively paltry portion of the total. She can send her investigators to Singapore, an hour and 50 minutes away by any one of 35 flights a day, where, according to a 2014 Cornell University Southeast Asia Program study, at least 39,000 Indonesians worth US$4.1 million each were residing “semipermanently” and had stored non-home financial assets. The study put the total amount of Indonesian money in Singapore at a minimum of US$93 billion. According to one study, however, as much as an astonishing US$380 billion has been spirited out of Indonesia alone – 40 percent of Singapore’s total banking receipts. 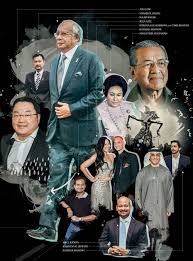 Among the other dictators, crooks, strongmen and satraps who are believed to have deposits – or have had – in the Singaporean banking system are Zimbabwe’s 95-year-old former President Robert Mugabe, the late Philippine strongman Ferdinand Marcos, the jailed Taiwanese President Chen Shui Bian, the disgraced former French Budget Minister Jérôme Cahuzac, former Malaysian Prime Minister Najib Razak and many more.

On March 17, 2009 – a decade ago – this reporter was present when the Burmese junta leader Thein Sein, the head of what was then one of the world’s most repressive and poverty-stricken countries, flew into Singapore for a ceremony in which an orchid was named for him in the island republic’s magnificent botanical gardens. Another was named for Thein Sein’s wife. The common wisdom in Singapore is that the orchid honor was bestowed because of the amount of money Myanmar’s generals had laundered out of their benighted country and deposited in Singapore’s banks.

The volume of hot money that moves through Singapore’s banking system, unimpeded by the Monetary Authority of Singapore and protected by a comforting tangle of banking secrecy laws, seems at odds with the country’s public stance of incorruptibility. An attempt to fix a parking ticket would have the miscreant hauled off to jail.

The late Prime Minister Lee Kuan Yew, confronted in 1986 with corruption on the part of Housing Minister Teh Cheang Wan, who was integral in helping him transform the country from British colony, refused to look away. Teh committed suicide rather than face trial.

For decades, Indonesia has been in a half-hearted war to repatriate its money, at one point in 2007 blocking the delivery of Indonesian sand used to expand Singapore’s coastline in an effort to force the island nation to agree to an extradition treaty to get back bankers who stole US$13.5 billion from 48 ailing banks during the 1997-1998 Asian Financial Crisis and moved the money into Singaporean banks. They have never succeeded.

In the 2008 global financial meltdown, Indonesia’s Century bank failed, with US$1.5 billion allegedly stolen by the bank’s president, Robert Tantular, according to lawsuits filed in Singapore and Mauritius. The Indonesian Bank Deposit Insurance Corporation, which is designed to provide an insurance cover for failing banks, allegedly poured in another US$750 million. In the end, the bank was recapitalized and renamed twice more, with massive fund flows out of the country again to Singapore. Tantular was prosecuted for the theft, but inexplicably was freed in December 2018 with half his time served, provoking a new investigation by the country’s Corruption Eradication Commission.

With global watchdogs increasingly cracking down on Switzerland, Singapore has become known as the go-to bolt hole for money flowing in from Cyprus, Russia, Dubai and Qatar. It is an emerging destination for private wealth management – a code word for hidden money. Its banks are known as among the safest in the world. It has never had a bank failure, although it shut down two Swiss subsidiaries during the mess created by Malaysia’s huge 1Malaysia Development Bank scandal.

As authorities have put pressure on Swiss authorities to open the doors to the alpine nation’s bank records, Singapore has developed its banking secrecy laws to protect money flows, blocking regulations developed by the 36-country Organization for Economic Cooperation and Development on publication of bank customer information. According to a 2017 Boston Consulting Group report, these tight banking secrecy laws had attracted as much as US$1.1 trillion in foreign funds into the banking system.

The access by less-than-respectable money seems to have reached its apex with the long-running 1MDB scandal, during which now-deposed Malaysian Prime Minister Najib Razak and his confederate, Low Taek Jho, spirited billions of dollars through the Singaporean system. Najib famously moved US$681 million sent to him by Jho Low through the Kuala Lumpur-based Ambank in 2013, using part of the money to finance the successful 2013 election won by the Barisan Nasional, and then moved the remainder back out to subsidiaries of Swiss banks, both of which were suspended from doing business in Singapore.

The full story of the magnitude of theft from 1MDB and the money’s passage through Singaporean banks is told in two recent books, “The Billion-Dollar Whale by Wall Street Journal reporters Tom Wright and Bradley Hope, and The Inside Story of the 1MDB Expose by Clare Rewcastle Brown. Both books tell a ring-around-the-rosy story of billions of dollars that moved with impunity from a long string of shell companies set up in Caribbean hidey holes, zipping through the Singapore banking system without any problems until authorities in the United States and other jurisdictions started calling attention to the process.

As Brown writes, “Ironically, at a time when our ability to connect and communicate instantaneously should enable us through forensic accounting to track suspicious transactions and assure there is no hiding place for them, things have got worse, not better. As long as national legal systems are limited in their ability to monitor and supervise extra-territorial transactions, and as long as international cooperation remains ineffective and deficient, then sending money offshore will continue to deprive national treasuries of the revenues they need, leaving domestic populations worse off and in many cases impoverished,”

There is no better proof of that than the billions of dollars that have moved out of Indonesia, and the ease with which it has been hidden in Singapore or moved on to other obscure corners of the world.