by James Ockey, University of Canterbury

For Thailand’s junta, the 2019 election is to be carefully managed so that the government can return to power with enhanced legitimacy, both among its own people and the international community. Yet the National Council for Peace and Order (NCPO) may have miscalculated its ability to control the elections effectively and so enhance its legitimacy. 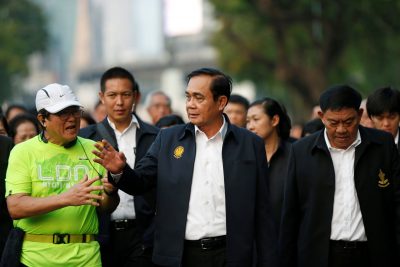 The constitution and electoral laws were carefully designed to disadvantage the two large parties, Pheu Thai and the Democrats. Meanwhile, the junta leaders are allowed to appoint the 250 senators who will join with elected MPs to choose the prime minister. The constitution also allowed junta leader Prayut Chan-o-cha to be nominated for prime minister without membership in a party. This gives him greater flexibility in seeking the additional 126 elected MPs whose support is necessary for him to remain in his current position.

While writing a favourable constitution and electoral laws proved possible, managing the campaign process is much more difficult. Yet strong efforts are being made. Elections are under the purview of the Election Commission of Thailand (ECT). PNet, an NGO that independently monitors the election process, recently awarded the ECT an ‘F’ grade for its performance, stating that it ‘has failed to demonstrate it is not under undue political influence’.

So far, the ETC has decided that a government handout to the elderly and the poor just prior to the beginning of campaigning did not violate election laws and that the pro-government Phalang Pracharat Party (PPRP) had not accepted illegal donations at a fundraiser. Most recently, it ruled that the prime minister could actively campaign with the party that nominated him (a step too far even for Prayut himself, who instead has chosen to follow the party on the campaign trail).

In contrast, in the case of the anti-government Thai Raksa Chart party, the ECT recommended dissolution without following its own procedures in a rush to judgement. The Constitutional Court would later follow that recommendation.

In January and February, I interviewed candidates from a range of parties, in all four regions of Thailand. None expressed any faith in the ECT. Candidates of pro-regime parties thought the ECT was ineffective. Candidates of anti-regime parties not only questioned the ECT’s capability, but also feared that it was focused on identifying any small violation of the law that would justify banning opposition candidates and parties.

Opposition parties also have to defend themselves from the National Broadcasting and Telecommunications Commission (NBTC). The NBTC sought to shut down the opposition-oriented Voice TV for 15 days during the election, only to see the decision reversed by the courts. Other threats have come from criminal investigations, with leaders of the Future Forward party charged under the Computer Crime Act.

Ironically, but perhaps not surprisingly, attempts to manage the outcome of the election appear to have created a backlash against the regime. Recent polling done by the Nation newspaper shows the PPRP winning just 62 of 350 constituency seats, with the anti-regime Pheu Thai party winning 136. A recent rally of the PPRP in Korat drew just a few hundred supporters, leaving thousands of empty seats.

Perhaps more interesting are the results of a recent King Prajadhipok Institute poll, which indicate that 96 per cent of eligible voters intend to vote. One would not expect that level of enthusiasm if voters were happy with the government and the status quo.

Political parties also seem to be reacting to anti-government sentiment. The Democrat party, which is likely to win the second most seats after Pheu Thai, recently announced that it would not support the return of Prayut as prime minister. The Democrat Party had previously been deliberately ambiguous regarding its stance. It also set conditions for potential pro- and anti-government coalition partners.

In an interview with Bloomberg, Bhum Jai Thai (BJT) party leader Anuthin Charnvirakul stated that the party will wait for the outcome of the election before finalising its stance, so that it can take into account the voice of the people. BJT has long been considered to be firmly on the government side. Answering this way, even as a campaign tactic, indicates concerns with being seen as too firmly on the side of the junta.

Despite these indications of very limited support for the government, it is expected that the junta will continue to manage the outcome. In the interviews I conducted in January and February, academics and candidates suggested that the junta will expend resources to convince both small parties and individual MPs to join the pro-government side after the election, ensuring support will go well beyond the elected members of the PPRP.

One leading member of a large party noted that the ECT has 60 days to certify the results of the election. They raised concerns that during that period anti-government parties might be dissolved to ensure the junta remains in power.

While Prayut is likely to return to power, it will not be with the clear mandate he seeks. The manipulation of the elections to ensure his return is more likely to result in a decline in legitimacy and support at home, although even a manipulated election may help relieve international pressure to return to democracy. Under such circumstances, concerns about future government stability are likely to remain.

James Ockey is Associate Professor at the School of Language, Social and Political Sciences, University of Canterbury