Why Najib keeps delaying his trials 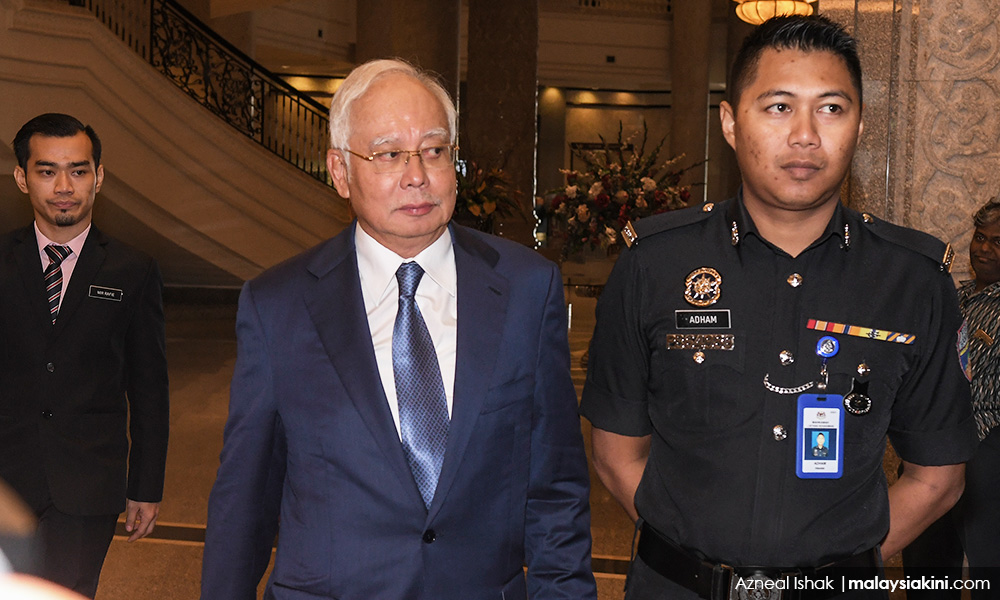 COMMENT | It’s obvious what Najib (above) is trying to accomplish: do whatever it takes to avoid prison.

Delaying tactics is one of the ways to do that. No matter what we say about them, Shafee Abdullah and his legal team are experienced lawyers who have the law and procedure in the palms of their hands. They know enough of the flaws within the legal system and its weakness in dispensing justice.

Thus far, the four appeals relating to the withdrawal of the prosecution’s certificate of transfer; gag order to prohibit media from discussing the merits of the case; recovery of documents; and the appointment of Sulaiman Abdullah as lead prosecutor all could amount to delaying tactics.

Although these appeals are permitted by the law, they sit uncomfortably in the grey area of whether they are truly important and necessary to protect the accused’s right or they are simply delaying tactics.

My opinion is these are delaying tactics because delaying the trial is profitable for Najib.

In fact, delaying is the only viable option.

Firstly, the straightforward conclusion is that delaying trial would delay the eventual conviction. Delaying a day is allowing another day for Najib to negotiate his political survival with the public.

To this end, Najib has been successful in orchestrating a comedic troll machine online that is targeted at making fun of the government. His social media team is creating content that would incite disapproval of the existing government. However fleeting and half-hearted this support is, at least it provides Najib with a lifeline to his political career.

Secondly, delaying makes sense in a criminal trial because it almost inevitably makes the defence’s case stronger and the prosecution’s case weaker.

However, there is a bind. It is also precisely because the consequences of a criminal trial to an accused are significantly more drastic than a civil trial, that the court would be more open to the accused’s request for time and appeal applications. This is especially so in a high-profile case that carries significant punishment like Najib’s, where the court would want to avoid accusations of bias against the accused.

That is why the defence would attempt to make every excuse to either extract more information from the prosecution to build their own case, or to drag out the legal process. None of these methods is illegal or impermissible, but they are irksome and maddening to people.

Thirdly, the most positive outcome for Najib is that delaying may mean escaping prison altogether—his best-case scenario.

We are approaching the end of March 2019 and the trial is not even close to starting. It is not surprising if Shafee (above) and his legal team successfully delay the trial for a few more weeks, even months, so that the earliest start date ends up around May 2019.

That will be one year since the PH coalition came into power.

What this means is that if Najib could drag it out long enough that the trial only starts then, he has a very good chance of not having a court decision until the end of the PH term as government. This is especially when each criminal trial contains voluminous charges and documents that require in-depth exploration of the evidence and submissions that will inevitably use up a lot of time.

If Najib could drag it out long enough for each trial, and the subsequent appeal processes in the Court of Appeal and Federal Court, there may be a chance there is no decision before the 2022 general election.

And if the PH coalition had not performed well and gets punished in the 2022 general election with Najib’s Barisan Nasional coalition returning to power, Najib may escape prison.

Although theoretically, the judiciary is independent of the executive, the constitutional subordination of the judiciary since 1988, and the repeated history of controlling and fixing judicial decisions make a “Najib escape” not unlikely.

Even if Najib does end up in prison before the next general election, he may go in as a martyr if the delaying tactic works. The delay would have bought the opposition enough time to build themselves as a credible alternative, and for the PH government to under-perform enough that Najib’s social media hype might translate into real support. That makes a prison term less painful for Najib.

Of course, this is just my hypothesis. But a hypothesis may come true.

JAMES CHAI works at a law firm. E-mail him at jameschai.mpuk@gmail.com.

7 thoughts on “Why Najib keeps delaying his trials”