In the age of terror, we don’t need inciteful preachers

COMMENT | ‘Minister meets ‘inspirational‘ Zakir Naik,’ read a news headline. This is a very disappointing message considering that when Mujahid Yusof Rawa became de facto Islamic affairs Minister, he announced that Zakir’s way of preaching was not suitable for our multicultural society.

Why a different message all of a sudden? I am also troubled by the news that we’re bringing Malaysian Islamic State fighters back home. What are we getting into?

Alas, is our minister in charge of religion so shallow in knowledge he needs the urgent help of a TV evangelist who is wanted in his own country? How does this go well with what the national unity minister wants, as well as what the education minister would craft for our philosophy of education or social reconstruction and a new Malaysian patriotism?

Have we not enough confidence in our own understanding of how to explain the beauty of Islam in a multicultural society? A religion that can co-exist peacefully with other beautiful religions and philosophies? Preach for peace or don’t preach at all. Or do we really need preachers of this kind, such as Zakir Naik?

Years of studying (and later teaching) Chinese, Indian, Western, and Islamic philosophies have taught me to appreciate diverse traditions and never to belittle any of these “truths”. We cannot know the Ultimate Truth, only “perspectives” useful in our lifetime. And these truths come in a variety of languages and concepts. We just need to train our mind and soul to be worldwise.

All Muslims are not necessarily brothers. I am not a brother to those who support the Islamic State, nor to those who preach hate, half-truths, and profit from these. Calling “brother” can be a first step in dominating and colonising your minds.

Islam does not need to be “defended” nor other religions need to be “attacked” in order for one to profit from religious speeches. Confrontational politics has done enough damage to Malaysians. We need more goodwill dialogue in an age of continuing terror.

I am surprised some Malaysian government leaders do not have the good sense to judge what is “inspirational” and what is “inciteful” about the Mumbai speaker, whose modus operandi is to prove other truths wrong by employing half-baked analysis.

Besides, the grand show of converting people to Islam on stage cheapens the religion – reminiscent of Christian preachers who play with rattle snakes or orchestrate a session of “speaking in tongues”. Any religion should not be trivialised as such. Each religion must encourage more deep learning and less marketing in order to teach people to behave in this world.

In the United States, I have taught Comparative Religions, Philosophy of Religion, Islamic Scriptures in translation, and related courses, but find the confrontational style of “fiery and steamy and hot peppery” preachers and dakwah-rists too vile and too repulsive for Malaysians.

Preachings that divide and create animosities should not be allowed as long as Malaysia is still struggling to contain race-religious hatred.

Malaysia, as a lovely cultural location of religious harmony, does not need any preacher to bring his/her ideology and conflict here.

We cannot call a preacher “inspirational” when the work done is divisive – creating animosity among a variety of believers. Isn’t Abu Bakr al-Baghdadi, the leader of the Islamic State, inspirational? TV evangelists and those doing “dakwah-for-huge-profits” prey upon the vulnerability of those who do not read widely, especially about comparative religions and philosophies. We need to educate the public. Malaysia is not a Taliban state of the lesser-educated.

Again, as one who has taught Public Speaking for many years and studied speakers and analysed their speeches, I find a high level of toxicity in the style of speaking of TV-evangelists such as Zakir Naik. 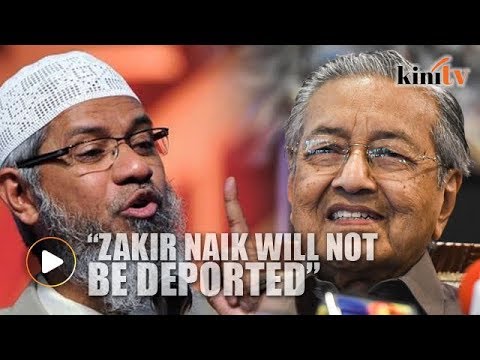 Religious discussion should be dialogical, not confrontational. Each religion has flaws. A good public speaker does not intimidate/shout at members of the audience. Especially if he has a microphone and the stage. A good preacher doesn’t ask if you’re Muslim or non-Muslim before answering questions.

Zakir Naik came from a hostile environment of an ongoing conflict between Hindus and Muslims in India. Perhaps he is used to preaching with hostility – which is not suitable for intelligent Malaysian audience.

Maybe I should go around the country preaching how NOT to preach against other religions? Will I get an island too?

Why the special treatment?

Yes, what a special treatment: first, they gave him an island. Then permanent resident status. Then they hug him tight like lovers. Then we allow him to go public in finding flaws in and belittling other religions. This is how we show our love to a preacher who is wanted in his own country. Preaching is not about proving one religion is better than others.

What is so inspirational about a preacher who lambasts other religions? The Malaysian government seems to be taking it easy on matters of national security. And harbouring radical preachers!

Then there is the news that we plan to give only one month of rehabilitation time for returning Islamic State fighters and support staff, people who had pledged allegiance to another state – the terrifying Islamic State.

How many years did it take to radicalise them through those Taliban schools? Already, Malaysian schools are fertile grounds for radicalism. Why hold the seeds of destruction in your hands? You bring in former IS fighters and you might open up a new recruitment centre. Beware. It’s a business. Recruiters get paid. We are treading on dangerous national security grounds, Malaysia. Don’t we know that IS is moving into Southeast Asia? And our solution is a gentle reminder and rehabilitation?

Malaysian politicians must realise that the internet can bring about a change of any government, and bring down any politician. It is our post-modern Frankenstein, the voice of the masses. It’s not easy to mediate freedom of speech on the internet.

Our prayers go to those who perished in the attack on the two mosques in Christchurch, New Zealand. We have a lot to work for peace. Though we cannot stop terrorist acts, we can at least detain or deport those who inspire others to hate other religions.

8 thoughts on “In the age of terror, we don’t need inciteful preachers”