Within the context of looming economic pressures by the EU, analysts have drawn quick conclusions that Cambodia’s economy is going to collapse. This piece provides an alternative view explaining why Cambodia will not face economic crisis driven by external pressures and sanctions.

Cambodia has opted for an open economy since the early 1990s based on the belief that reforms and openings are necessary for economic development. Being a least developed economy, it was granted preferential tariff schemes, and could afford to export to Europe and the US.

The decision of the EU to launch procedures to temporarily suspend trade preferences would compel the Cambodian government to speed up its reforms and diversification strategy. It can be viewed as a “positive” factor.

Improving business and investment environment, increasing productivity, and reducing barriers and cost associated with trade would need urgent attention and intervention from the state. Cambodia’s economic structure has been gradually moving from labour-intensive industries to a knowledgebased economy.

The service sector now accounts for about 50 percent of GDP. The annual growth rate of the sector has been more than seven percent from 2014 to 2018. Economic pressures from the EU will force Cambodia to accelerate its economic restructuring towards a service-driven growth. 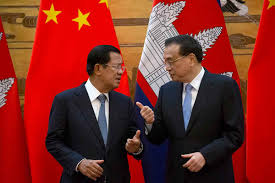 The advantages and strengths of Cambodia rely on its dynamic and entrepreneurial young workforce. As education reforms and skill development programmes are on the right track, Cambodia will be able to produce a new generation of young, skilled workers for the coming years.

Regional integration is one of the key pillars of its foreign economic diplomacy. As Cambodia’s economic lifeline is increasingly connected with ASEAN and Asia, its future will largely be defined by the Asian economic powerhouses. ASEAN will be the fourth largest economy in the world by 2030.

The economic pressures from the EU will not overly affect investors’ confidence as Cambodia will be able to adjust itself to changes. Foreign investors should be confident of the future economic trend and dynamics of Cambodia.

The first drop of oil to be extracted from Cambodia’s offshore oil field territory is scheduled  for late 2019. The news follows the latest update from KrisEnergy that it has now closed invitations to contractors for the tender for the engineering, procurement, construction, installation and commissioning services for the Apsara Oil Field Project.

Light manufacturing, high-tech, and service industries are key areas that foreign investors should invest as the government in cooperation with development partners are pouring in more resources in building hard and soft infrastructure to support the industrialisation and modernisation of the service sector.

The eventual possibility of the EU revoking the EBA has been on Cambodia’s mind for some time now. This led to the formulation and adoption of the Industrial Development Policy (IDP) in 2015. The opening paragraph of the IDP states: “The launching of this policy connotes the necessity and the urgency to embark on a `new growth strategy’ that responds to the structural transformation of domestic economy, and the changing regional and global economic architecture.

The adoption of this policy is motivated by the following considerations:

First, the favourable geopolitical spillovers in terms of linking Cambodian economy and its industry to the region especially within the ASEAN Economic Community and regional economic liberalisation frameworks;

Second, the potential role of industrial sector in promoting growth and creating new jobs in the context of an open economy, a demographic dividend and major structural changes that are conducive for industrial growth;

Third, the critical role of industrial sector as a policy tool to enhance the performance of core economic sectors such as agriculture and services that will boost economic growth;

And fourth, the importance of the industrial sector as a focus for initiating both structural reforms and governance reforms of key national economic institutions with the aim at boosting economic productivity in long-term and avoiding falling into the “middle-income trap”.

However, Cambodia’s industrial sector remains weak and narrow as reflected by its simple structure of manufacturing and low level of sophistication that mainly focusses on garments and food processing while most manufacturing activities are still family-based and do not have the capacity to compete in the international market.

The industries feature a lack of diversity, an informal and missing middle structure, a weak entrepreneurship, an urban-centered industry, low value addition, and low-level technology application. Micro-enterprises represent 97 percent of the sector but generate a mere 30 percent of jobs, and contribute only 12 percent to the overall turnover. But with the eventual EBA revocation, Cambodia ought not be held hostage by the EU or any other trading partner.

The EBA has been “weaponised” by the EU to compel it to make considerable concessions not directly linked to trade but to domestic politics, at a time when EU members themselves are questioning their membership with the trade bloc. Is the EU subservient to the US, and doing its bidding? It appears so, given the quick response of the US Embassy that supported EU’s action, reiterating similar demands on Cambodia.

In this aspect, the speech by Hungarian Foreign Minister Peter Szijjarto earlier this month in the presence of US Secretary of State Michael R. Pompeo deserves a mention. It is a chilling reminder of what Cambodia has faced year after year since 1993.

“We Hungarians, the Hungarian government, has based our foreign policy on mutual respect, and we think that the world is not going to be a better place if some countries spend their time intervening in the internal politics of other countries or lecturing them. Therefore, based on principles, we have extended our veto in the EU whenever it came to criticism concerning the decisions – political decisions of the US.

For that, we have undergone and have taken on conflicts and risks but we’re not going to consent to it in the future, and that either the EU or other international organisation would criticise the sovereign political decisions of the US. At the same time, we also carry out a foreign policy that is based on openness and sincerity. So we say the same thing behind the scenes as we say here. It is easy therefore for us to discuss issues like relations to Russia or the gaining of ground by China in other places or also our relationship with Russia.

“As I also told the Secretary whenever we talk about the economy gaining ground of China, then Hungary is responsible for 1.2 percent of the EU-China trade, and I also say there is a hypocrisy concerning the cooperation with Russia as there is a lot of criticism on the surface, and below it, there is a lot of trade between Europe and Russia in billions of euros”.

Coming back to the EU and Cambodia, why has the EU ignored the gains made by the factories here, many of whom are subjected to stringent inspections and rules, and the generous benefits extended to the workers? Why are there double standards or to paraphrase Szijjarto’s words – a hypocrisy concerning the internal issues of Cambodia as there is a lot of criticism on the surface.

Yet, the EU does business with Cambodia’s neighbours whose workers’ rights are worse? Is it because it hedges on China in terms of its economy and development since Cambodia needs huge investments to boost infrastructure, and hedges less on the West, who in any case, do not invest in such projects on a scale that could replace China? Or is it because Cambodia is seen as a small economy to matter in the grand geopolitical chess game of Western superpowers who use Cambodia’s plight to enforce their own political will on Cambodia and Cambodians?

In time, it would be in the interest of the West – the US and EU, as well as China, Korea, Japan Australia, and Russia to give equal emphasis on Cambodia’s economics and politics, and not just focus on its neighbours who seem bigger but have worse-off human rights and political record. In this scenario, it may not be wrong to say that Cambodia should just abandon the EBA and no longer fight a lost cause.

It should strengthen its economy and trade while cutting corruption and bureaucracy to make the products and economy more resilient, and investor-friendly to all nations, making it a competitive economy. CapCam