Foreign Minister Prak Sokhonn has lambasted  the European Union for applying a double standard with Cambodia over a review of Every Thing but arms preferential status, saying that they failed to act against Laos and Myanmar.

Speaking to dozens of Cambodia’s Ambassadors, Permanent Representatives and Consuls Generals in an annual conference at ministry office in Phnom Penh on Tuesday, Mr Sokhonn said that the EU acted improperly against the Kingdom.

“I want to say double standards because they use this issue to pressure Cambodia. We can say that they behave improperly,” Mr Sokhonn said, referring to the EU’s move to review the Kingdom’s EBA access. 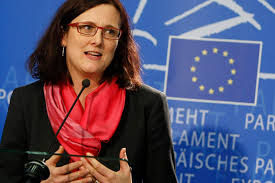 He said that he discussed with EU Trade Commissioner Cecilia Malmström about more than 800,000 workers and two million other people who received benefit from garment sector in Brussels in January.

“Ms Malmström raised about pluralism as she accused us of dissolving the CNRP, so she meant it is no longer pluralism in Cambodia.”

Mr Sokhonn said that the EU failed to act against Laos and Myanmar.

“Laos has the EBA like us. If we talk about pluralism, is Laos a pluralism country? Why don’t you pressure Laos? Why do you still keep the EBA for Laos?”, Mr Sokhonn said, noting that bilateral free trade agreement between the EU and Vietnam has still existed even though Vietnam is a one-party system.

“They close their eyes not to see the government’s achievement. They want to see a perfect democracy,” he said. “Myanmar is also threatened to be sanctioned by the EU but so far they have not taken any action against that country.”

“Why don’t they do something against Laos and Myanmar,” Mr Sokhonn inquired.