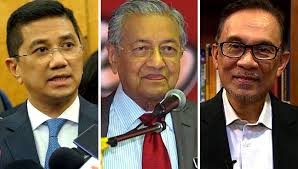 A glance at the newly-announced lineup of Malaysia’s Economic Action Council (EAC) poses more questions than answers. It was formed to respond and take action in addressing economic issues. Objectives include stimulating economic growth, ensuring fair distribution of wealth and improving the well-being of the people as well as focusing on issues related to cost of living, labor, poverty and home ownership.

What is its relevance? It sounds eerily like a cabinet within a cabinet, and at a transitionary period, it looks like a redundant idea that will prove to be merely a political tool.

In less than a year since assuming the premiership, the 93-year-old Mahathir Mohammad has flip-flopped on various issues, most obviously his firmly stated assurance in May 2018 that the victorious Pakatan Harapan coalition would not be accepting turncoats from the losing United Malays National Organization.

Yet, along with the announcement of the creation of the economic action body,  Mahathir happened to embrace seven former UMNO MPs into his own Parti Pribumi Bersatu, an act of betrayal to the people of Malaysia. UMNO was thoroughly discredited as a party corrupt to its very roots – by MPs who were kept loyal to the previous premier, the disgraced Najib Razak, by outright bribes.

Anwar Ibrahim has been unceremoniously left out from the EAC, an indication that Mahathir is once again vying to divert as much power and attention towards the lesser known and underperforming Minister of Economic Affairs, Mohamad Azmin Ali, the former chief minister of Selangor and an ambitious pretender for the leadership of the coalition.

Aside from the fact that the council’s existence shows failure on behalf of the prime minister to appoint qualified people to the cabinet, if we are to accept the premise that the council should exist, the right thing to do is to invite the premier-in-waiting to be a member in a move to demonstrate your confidence in your designated successor to the voters as well as giving Anwar a role to play in contributing to the agenda set forth in the EAC’s charter. Malaysians should beware lest Mahathir smuggles old failings into the mix whilst our attention is held elsewhere.

The political heavy lifting was done by Anwar, who from his prison cell pulled a lax opposition and the complaining class into the fight alongside his supporters to create the conditions for change. Conditions that proved vital in the overthrow of the Barisan Nasional regime.

It is evident that something more than elections are necessary to create a genuine new dispensation of sustainable democratic good governance.

Creating the EAC and sidelining the PM-in-waiting is not a good indicator of that. Authoritarian rule is not just about figureheads. They use power th to maintain themselves is institutionalized and embedded in deep structures of privilege that corruptly deliver a nation’s bounty into the hands of a chosen few.

If Anwar Ibrahim is the icon for democracy, then Mahathir is the icon and spokesperson of the embedded structures of inequity.

As the principal architect of genuine reform,  to sweep aside the structures of authoritarian control and the inequity they beget, Anwar’s reform agenda seeks to eliminate  corruption, cronyism and nepotism, the elements of a bygone era.

It is the diligence and energy Anwar applies to promoting an alternate vision of good governance, one and of a free and competitive Malaysian economy and harmonious, multiracial society that  made him an important voice not only in Malaysia but around the world. Anwar has spent his career speaking for and articulating an alternative agenda of politics.

As a Deputy Prime Minister during the Asian Financial Crisis I988, Anwar came very close to dismantling the Mahathirist version of crony capitalism when he decided to implement an IMF style austerity program, suspend big-bulge infrastructure investment, and force big businessmen to take care of their own debts.

Anwarnomics promises to do away with state-backed racism. It promises to be inclusive, rules-based and competition-driven with a large, well-funded social safety net and he has reiterated time and again the need for uncompromising reforms.

Here are some of the things he has advocated for, long before the formation of the EAC:

Malaysia’s economic policies should be inclusive and to dismantle obsolete policies such as the New Economic Policy. Positive.

Given the facts, it is only fair to question Mahathir’s  motives  in creating the EAC while failing to include the next Prime minister.

Malaysia is rich in resources and possibilities. Change will require more than just elections, it requires dismantling the institutional structures of inequity, most of all it will depend upon building the strength and capacity of civil society, the plethora of organizations and associations by which ordinary people hold their governments to account.

9 thoughts on “Mahathir Using Economic Council to Edge Anwar Out in favour of Azmin Ali?”