“Sport has the power to change the world. It has the power to inspire. It has the power to unite people in ways little else does. It speaks to youths in a language they understand. Sport can create hope, where once there was only despair. It is more powerful than governments in breaking down racial barriers. It laughs in the face of all types of discrimination.”–Nelson’ Madiba’ Mandela

Dr. Mahathir Mohamad has been Malaysia’s most inspiring politician since he led an unlikely coalition of opposition parties to defeat the previously all-powerful Barisan Nasional coalition in the country’s 14th general election. 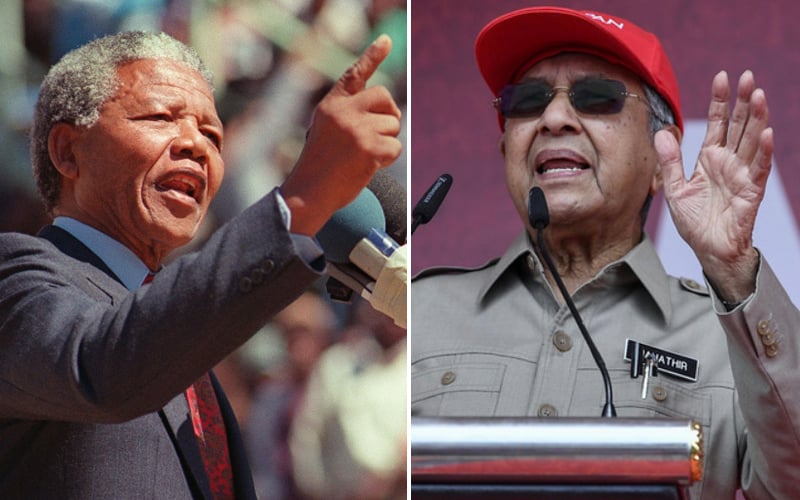 It was a triumphant return for the 93-year-old ex-Prime Minister with a reputation of having his own way, more so with revelations he croons to the Frank Sinatra classic “My Way”.

Five years after his death, Nelson Mandela remains South Africa’s most inspiring politician. It had been so from the moment he was arrested and sentenced to life imprisonment as a 44-year-old freedom fighter in 1962. On May 10, 1994, four years after his release, the 78-year-old anti-apartheid icon became the first black to be elected president in South Africa’s first  democratic election.

One issue the hard-hitting Mahathir has revived since becoming Prime Minister again is Israel and the Jews. In a BBC interview last October, he was unsurprisingly unapologetic in calling the Jews “hook-nosed”, among other criticisms of the Jewish state and people. Various foreign governments and international human rights groups have condemned his “decades-long record of anti-Semitic conspiracy theories”.

In recent weeks, the issue re-surfaced with Mahathir behind Malaysia’s decision to bar Israel and its athletes from participating in the 9th World Para Swimming Championships, which Sarawak successfully won the bid to host in July. This week, the International Paralympic Committee stripped Malaysia of the right to host the world event due to Putrajaya’s decision to bar Israel’s participation.

Nearly 25 years ago, Mandela faced quite a similar dilemma, albeit of a much bigger scale. Before he came to power, the all-white South African government had already won the bid to host the 1995 Rugby World Cup. The new President had less than 12 months to act before the event started. The whites in South Africa loved rugby as much as the blacks hated it. The green jersey of the Springboks – the national team – was a hated symbol of apartheid repression to the blacks. They cheered when the international sports community boycotted South Africa. Every foreign team received their undivided support when it played against the Springboks.

In that environment, Mandela, the man incarcerated for 27 years for his stubborn resistance to Apartheid, made the startling decision to embrace the Springboks. He was booed when he first tried to persuade the majority blacks to join him. The minority whites and most of the players were uncomfortable. But Mandela persisted in his campaign to get the divided nation to rally behind their national team which traveled around the country to introduce the game to children in poverty-stricken black townships.

In the month-long tournament, the unfancied but inspired Springboks went all the way to qualify for the final against rugby powerhouse New Zealand. The whole country was in a frenzy. Before the match started, Mandela walked down to the field wearing the green team jersey and cap to greet the players. The 65,000-crowd of mostly white South Africans was stunned in disbelief but moments later erupted into chants of “Nelson! Nelson! Nelson!”

A year after his retirement from politics, Mandela himself gave an explanation which is worth quoting in full:

Peter Raja is an FMT reader.

9 thoughts on “Mahathir’s way vs Mandela’s”