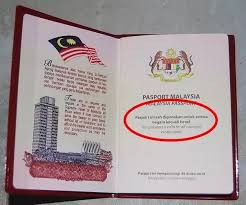 2. This is the only country in the world that Malaysia treats in this manner.

3. In the first place Israel was created from a slice of Palestinian land, without a referendum or a plebiscite being held.  The Palestinians were expelled from Palestine without any compensation for the land and homes seized by the Israelis.

5. When the Palestinians resisted and threw stones at Israeli tanks and armoured cars, the Israeli soldiers fired live bullets at the Palestinian children and arrested many of them.  The arrested people were detained for years without trial.

6. The detainees were used to exchange with Israeli soldiers captured by the Palestinians.

7. The Gaza strip is blockaded by Israeli forces.  Relief ships carrying food, medicine and building materials were siezed in international waters and forced to go to Israel. In one incident 10 activists were killed.  These acts by the Israelis is blatantly against international laws.

8. When the Palestinians fired futile rockets at Israel, the Israelis dropped bombs and fired missiles at Palestinian towns and villages.  Schools and hospitals were destroyed, patients and children killed or maimed.

9. The blockade of Gaza is illegal but no country has condemned Israel for breaking international laws and moral codes.

10. Today Israel declares that Jerusalem is its capital.  When Palestinian slapped Israelis soldiers, they were shot and killed and many were detained.

12. Thousands of Palestinian have been killed or wounded through Israeli military actions.

13. The whole world can see the injustice and the oppression of the Palestinian by the Israelis.  But Israel is not even criticised by the people who talk so much about freedom from oppression and the rule of law.   Israel seems to be privileged.

14. If anyone criticises Israel or the holocaust he is immediately labelled “anti-Semitic”.  The implication is that he is inhuman or immoral.  But the blatant inhumanity of Israel is not condemned.

15. Malaysia is not anti-Jew or anti-Semitic. The Arabs are also Semitic people.  But we reserve the right to condemn inhuman and oppressive behaviour anywhere, by anyone.  We have condemned the Myanmar people for their treatment of the Rohingyas.  We have criticised many countries and people for inhuman acts.

16. Many people and many countries have condemned us.  But we have not been labelled nor have we labelled people who speak as a matter of right in a free world.

18. Israel is a criminal state and deserves to be condemned.  We know the strong backing for Israel.  We cannot act against Israel beyond refusing to recognise it.  We maintain we have a right to bar Israelis from our country.  When the world condemns us for this we have a right to say that the world is being hypocritical. Their talk of human rights and the rule of law is so much empty words.

19. I appeal to those who sympathise with the Palestinian cause to voice their condemnation.  Terrorism is not the answer.  A proper strategy is needed to bring justice to the Palestinians.

3 thoughts on “Malaysia and Israel”

Leave a Reply to The Cancel reply