I wish to present three perspectives of Islam concerning the concept of choosing a “leader” in Malaysia.

This article is inspired by Abdul Hadi Awang’s clarion call to Muslims to choose his narrow-minded brand of Islam, perhaps for the upcoming Cameron Highland by-election.

Each has given three different views of what is considered appropriate leadership within an Islamic framework of their choice.

This article is specifically for Malaysians to contemplate the type of Islam existing in Malaysia that will determine the course of our nation in the coming decades. 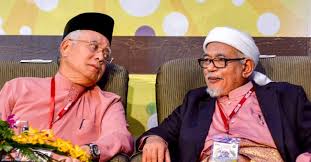 To Hadi, non-Muslims can NEVER be trusted at all, now and forever. To him, even if the non-Muslim looks “clean” he would eventually be corrupted simply because he is not a Muslim.

To Hadi, non-Muslims can NEVER be trusted at all, now and forever. To him, even if the non-Muslim looks “clean” he would eventually be corrupted simply because he is not a Muslim.

Simple. Clear. Concise. At whichever leadership position there is, whether for a head teacher, an elected representative, a district officer, a minister, a vice-chancellor and especially, the prime minister, the choice must always and forever be Muslim, no two ways about it.

It seems Hadi can clearly see the fate of everyone, Muslim and non-Muslim, because even the Prophet has said that no one knows their fate except Allah.

In a lecture posted on YouTube, the Perlis mufti was asked whether one can choose a non-Muslim leader or not. To me, for Malays to be asking that very question speaks volumes about the failed state of our education system for the past 60 years.

Asri gave what to me was a scholarly and clear answer. He firstly clarified that what is haram must be stated clearly, and anything that is not stated in the hadith and the Quran can be considered acceptable.

Democracy has never been stated by the Prophet and by the Quran and so it is not haram to use such a system in choosing a leader by a one-man, one-vote system.

Secondly, he said that the present administrative governance of the leadership in Malaysia is enshrined in the constitution and backed by the Malay rulers. Thus, the laws and guidelines for governance within a Malaysian-Muslim construct are well established and any different levels of leadership cannot decide willy nilly about any whimsical desire.

A head teacher has an SOP, an elected representative has a certain responsibility and jurisdiction, a district officer has his or her regulated guidelines, and so does a minister.

In that regard, a Muslim may choose anyone who is Muslim or non-Muslim for a position of leadership at any level except the topmost one, which is the prime minister of Malaysia.

The third view is by far my favourite, the most radical and what I consider the most constitutionally correct.

This view is propagated by Dr Ahmad Farouk Musa, a fierce critic of traditional and state Islam and a proponent of a modern and enlightened Islam for all.

He says that a Muslim must never choose a corrupt, immoral and cruel leader just because he is a Muslim. A Muslim must subscribe to the principle of morality and justice for all by choosing someone trustworthy with the strength and will to do the right thing for all, at all times, regardless of faith, race or status.

If the candidate is a non-Muslim then Muslims must choose him or her over a corrupt Muslim.

It was fortunate that Barisan Nasional (BN) had a mutual understanding of electing leaders at all levels of governance by choosing citizens of various races, cultures and faiths.

Malaysians must acknowledge the great debt we owe to BN for ignoring extremist views like those of Hadi. Truly Hadi’s view is destructive to all Malaysians and serves perhaps his egocentric desire for power and prestige as well as financial gratification. Thank you, BN!

The choice of leadership modelled after the likes of Asri has been a precedent that Pakatan Harapan (PH) now emulates. Thank you also to PH for ignoring the views of the ulama who think they are the only ones capable of ruling over Malaysia with their limited education and framework of thinking.

Hadi’s view is perhaps relevant for a small fishing community. However, the great problem that has arisen is that after the Islamic revival movement of the Abim/Ikram era, Muslims are more religious than the days of P Ramlee in the 60s and 70s.

Most Malays pray and have access to speeches by narrow-minded teachers, who propagate the Hadi view of leadership.

The proponents of this view are mostly in public universities holding positions of professors and associate professors. If I were to venture a figure in the 60s and 70s, 90% of Muslims would subscribe to the middle view of Asri and only 9% to Hadi and 1% to Farouk’s.

Now, I would venture that 70% of Muslims are with the view of Hadi, 29% with Asri and 1% with Farouk. This breakdown will cost untold hardship in Malaysia’s political scenario.

I would venture that my view and that of Farouk are 50 years ahead of time. The numbers supporting Asri’s view must turn to 70% if we are to move comfortably forward.

If I were to be bold and venture a guess, 100% of non-Muslims would subscribe to Asri’s view of leadership because the non-Malays accept and respect the cultural leadership of the sultan and the history of Tanah Melayu as an important civilisation and heritage.

Malaysians must understand that Asri is educating the Malays in a more moderate and progressive way, while Hadi seeks only discord and conflict as a political tool of power grabbing.

What of Farouk’s radical view of Islam? Well, he and I can wait 50 years. No hurry.