The Guardian view on May’s Brexit deal: it’s over, but what’s next?

The PM leads a party that is divided and a country stockpiling food and medicines as if preparing for war. She needs to humbly reach out to her opponents and find a way to prevent Britain crashing out of the EU in weeks. 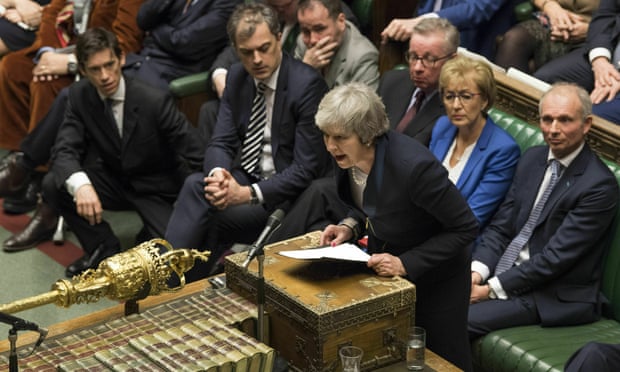 The overwhelming and decisive rejection by MPs of Theresa May’s withdrawal agreement to leave the European Union is a shattering blow to the authority of the prime minister. She has spent two years negotiating a deal, which in substance was the opposite of what she said she wanted in public, only to see it repudiated by parliament. Her minority government has now been defeated on no fewer than 28 occasions

Britain is leaving the EU in weeks and Mrs May leads a cabinet that is hopelessly split, a party that is riven with disagreements and a country that is deeply divided. So emphatic is the Commons historic rebuff that Mrs May’s deal is finished. Mrs May lost by 230 votes – the greatest defeat of a government ever. The scale of the opposition means it is not credible Mrs May could bring the motion back to the Commons, modified with a few tweaks from Brussels, and hope for success a second time round.

We do not have to settle for the Hobson’s choice of the May deal or no deal. The trouble is the Tory party is split between those who want a deal and those who do not. Mrs May has intensified the divisions within her party, rather than resolve them. She chose to start negotiations over Brexit not with the EU but with her own hardliners.

The red lines Mrs May subsequently set made it impossible for her to get a deal that would bring her fractious party together, let alone reach out to her political opponents. Her agreement ended up shaped by Mrs May’s obsession with immigration and placating Brexit extremists. The result is a “blindfold Brexit” –where almost everything about the future relationship with Europe is up in the air for two more years. It required a leap of faith to place trust in a prime minister who, the Commons wisely decided, deserved very little.

In the current circumstances, there is no majority in parliament for any of the alternative Brexit deals. This could lead to a disaster: Britain crashing out of the EU without a deal. That is why MPs must remove it as an option.

Labour has triggered a vote of no confidence in the government but is unlikely to win. That points to the need for a mechanism to allow a Commons majority to take control of the Brexit process. This would require innovation, of the kind seen last week, so committees can be empowered and laws brought forward. But to have other options would require asking the EU for more time. It requires parliamentary cooperation of the kind hitherto unseen.

Jeremy Corbyn and Mrs May ought not to stand in the way of such dealings. Constitutional devices such as citizens’ assemblies, raised by Labour MP Lisa Nandy, and another referendum would allow leaders to hold their parties together and provide legitimacy for whatever the public decides. These are not denials of democracy but a reinforcement of it.

Mrs May’s decision to put party politics ahead of national interest means this country will aimlessly drift as the government attempts to recast a withdrawal agreement. An absence of leadership can lead to a sense of panic, one inflated by a government stockpiling food and medicines as if preparing for a war.

We need to end the chaos and division that have done so much to disfigure our country. The question we face is whether there can be a durable relationship between Brexit Britain and the EU, which allows both to cooperate on the basis of shared interests and values. Mrs May left it far too late to accept the costs of leaving, preferring to pander to MPs whose snake-oil sales pitch is that there will not be any cost associated with Brexit at all. “Having your cake and eating it” is the Brexiter attitude that encapsulates this inability to think in terms of costs and benefits.

Yet coming clean about these things is necessary to move forward. The country now faces a situation without precedent in its constitutional history: how to reconcile the sovereignty of the people with the sovereignty of parliament.

The prime minister has been humbled into admitting she needs to win her opponents over. The Brexit vote was driven by stagnant wages, regional disparities and a soulless form of capital accumulation. These were not caused by the EU, nor will they be solved by leaving it. Only policies enacted by purposeful government can do that. Mrs May has not provided either.

One thought on “The Guardian view on May’s Brexit deal: it’s over, but what’s next? –Editorial”