Is Optimism Dead in the Trump Era?

By Susan B. Glasser

The sense of possibility that usually accompanies the start of a new year is difficult to maintain in the midst of the Trump Presidency.

In the stock market, it’s called the January Effect. Since this often-irrational condition of year-opening optimism was first given a name, in an academic paper published in 1942, economists have charted the phenomenon. The eternal hope for a fresh start is not confined to the financial markets, of course. It’s also why gym memberships and fad diets soar in the first month of the year and why, in politics, the insoluble problems of the preceding twelve months sometimes seem a lot less intractable.

This may be true even in the age of Donald Trump. At noon on January 3rd, as the 116th Congress convened, with the largest group of Democratic newcomers since the Watergate year of 1974, Nancy Pelosi, the new Speaker of the House, summoned the spirit of January in her speech welcoming “this transformative freshman class.” “When our new members take the oath, our Congress will be refreshed, and our democracy will be strengthened by their optimism, idealism, and patriotism,” she said. “Working together, we will redeem the promise of the American dream for every family, advancing progress for every community.”

Big, sweeping deals, the kind that are often talked about but rarely happen, tend to sound much more appealing in January. For the left, there’s been much discussion of a so-called Green New Deal, never mind its dim prospects with a climate-change skeptic in the White House. Other politicians came to Washington to be sworn in this week vowing to block special interests or save Obamacare. The Republican senator Lamar Alexander, meanwhile, is promoting the idea of a Trumpian about-face on immigration, in which the President, against all evidence, could make a wide-ranging agreement with the Democrats to fix the broken system once and for all. “Going Really Big on immigration,” Alexander wrote in a Washington Post op-ed this week, “could be Trump’s Nixon-to-China, Reagan-to-the-Berlin-Wall moment in history.” 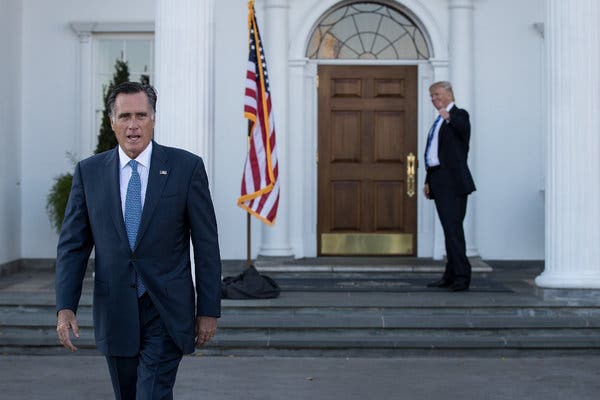 Optimism of a different sort came from another Republican, Mitt Romney, who was the G.O.P. Presidential nominee four years before Trump, and who has just been elected to represent Utah in the Senate. In his own Post op-ed, on New Year’s Day, Romney promised to challenge Trump by speaking out “against significant statements or actions that are divisive, racist, sexist, anti-immigrant, dishonest or destructive to democratic institutions.”

For the Never Trumpers remaining inside the Republican Party, Romney’s statement was evidence that resistance to the President did not die entirely with the late Senator John McCain and the retirement of Jeff Flake and Bob Corker. For Democrats who want to constrain Trump or pursue his impeachment and removal from office, it was a glimmer of hope—albeit a very faint one—that such an outcome might actually be possible in 2019, even with a Republican-controlled Senate.

But, in general, Washington these days is hardly a town for optimists, even of the January variety. And how could it be, in this opening to the third year of Trump’s Presidency? As 2019 begins, the federal government is about to enter the third week of a partial shutdown, already one of the longest in history, caused by Trump’s demand that any budget agreement include billions of dollars of funding for his border wall. Talks are at a standstill, and the chairman of the Senate Appropriations Committee, Richard Shelby, Republican of Alabama, said on Thursday that the shutdown could last for “months and months.”

The stock market, rather than booming with New Year’s ebullience, is continuing to tank. A new poll shows that more than sixty per cent of Americans expect a recession soon. Trump’s trade war with China is curtailing profits at Apple and other U.S. companies. In the capital, meanwhile, the divided government is expected to produce not landmark legislative deals but more gridlock. 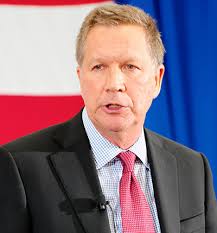 The 2020 Presidential race is getting an early start, with roughly two dozen possible Democratic candidates, and with Republicans such as Flake and the former Ohio governor John Kasich weighing challenges to Trump, meaning that both parties will soon be consumed by internal debates and political posturing. So much for the January Effect.

At the White House, Trump sent out a New Year’s message on Tuesday that conveyed less year-opening enthusiasm than it did a warning about the crazy times to come.

“2019 WILL BE A FANTASTIC YEAR FOR THOSE NOT SUFFERING FROM TRUMP DERANGEMENT SYNDROME,” he wrote at 8:08 A.M. on New Year’s Day. “JUST CALM DOWN AND ENJOY THE RIDE.”

On January 2nd, he convened a Cabinet meeting that seemed fully in keeping with his promise of a wild ride, offering an unscripted, extended look at a Presidency in meltdown mode. At the table surrounding Trump sat an acting Attorney- General, acting Secretary of Defense, acting Interior Secretary, acting E.P.A. administrator, Acting Ambassador to the U.N., and an acting White House Chief of Staff,  The turnover among Trump’s senior officials, according to the Brookings Institution, has hit sixty-five per cent in the course of two years. Stung by the negative headlines, and having cancelled his Christmas vacation because of the government shutdown, Trump called reporters into the room and kept them there as he rambled on and on. The session began just after noon and it ended, according to the transcript the White House later circulated, more than seventeen thousand words later, at 1:42 P.M. 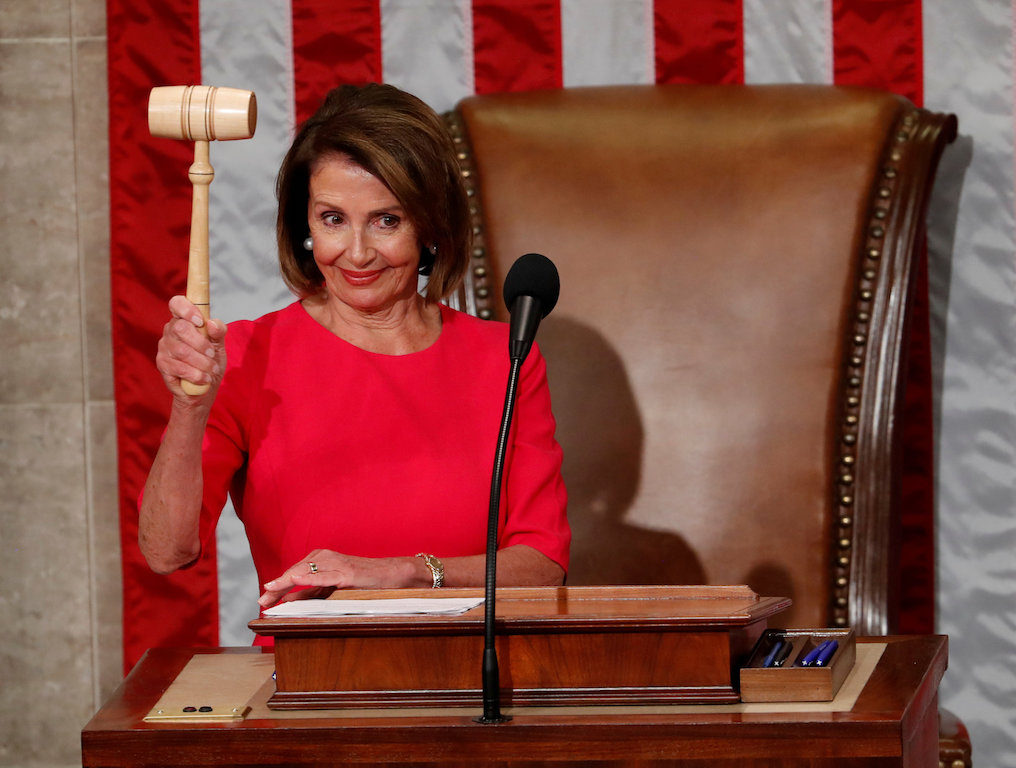 Speaker of The House of Representatives Nancy Polosi

The President’s long discourse was a grievance-filled litany that offered little in the way of comfort for optimists of any party, and its main news consisted of the President’s bizarre endorsement of the 1979 Soviet invasion of Afghanistan and his insistence, facts notwithstanding, that he “essentially” fired James Mattis, who in reality was the first Cabinet secretary to quit in protest since 1980. A day later, Pelosi took over the House of Representatives. Her caucus whooped and applauded as she listed the legislation that the House would now approve. The members cheered when she quoted a statement by President Ronald Reagan welcoming immigrants. They cheered when she promised transparency and “facts.” Only in the Trump era could an endorsement of the truth be seen as a partisan applause line, but we are where we are.

A few hours later, Brad Sherman, a rank-and-file Democrat from Pelosi’s home state of California, was set to introduce the first articles of impeachment against Trump in the new Congress. A significant and growing part of the Democratic caucus is committed to pursuing impeachment, regardless of Pelosi’s caution and the still-uncertain results of Robert Mueller’s investigation.

No one knows yet, of course, whether the effort to impeach Trump will end with the President’s removal, or in political disaster for those who pursue it. But we do know this: despite all the tumult and political instability that Trump’s unlikely ascendance has brought to the U.S. and the world, views of him have remained remarkably fixed. A Gallup poll from a year ago, at the start of 2018, found Trump with an approval rating of thirty-nine per cent among Americans. At the end of December, after he had fallen “in love” with Kim Jong Un and met with Vladimir Putin in Helsinki, fired his Secretary of State and national-security adviser and Attorney General, lost the House of Representatives, watched his personal lawyer and campaign chairman turn state’s evidence against him, and feuded publicly with everyone from the chairman of the Federal Reserve and the Chief Justice of the U.S. Supreme Court to the Prime Minister of Canada, his approval rating was exactly the same: thirty-nine per cent. Will 2019 be any different? As President Trump often says, “We’ll see.”

5 thoughts on “Is Optimism Dead in the Trump Era?”