The Makings of a Civil Service Mandarin 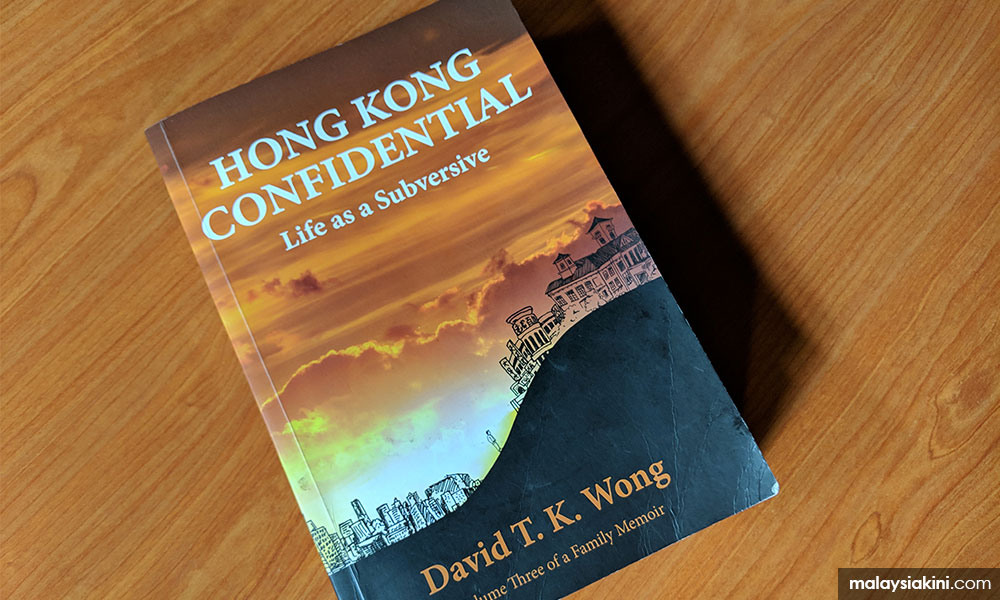 BOOK REVIEW | Sometimes the arrival of a book dovetails nicely with an issue that’s sparking in the public arena. Such is Hong Kong Confidential: Life as a Subversive by David TK Wong, a Hong Kong-born author living out his sunset years in Kuala Lumpur.

Wong served 21 years in the administrative service in Hong Kong, from 1961 to 1981. Hong Kong Confidential is a chronicle of the 89-year-old’s experiences in the civil service of the last British colonial outpost in the East which reverted to mainland China’s suzerainty in 1997.

The book holds valuable lessons and insights into what makes a good civil servant and how, perhaps, to foster and sustain a top performing service.

Since the 14th general election in May this year, when Malaysian voters ejected the long-ruling BN government and replaced it with the new broomism of Pakatan Harapan, the public has been inundated with what seems like a Pandora’s box of financial horrors left behind by the previous regime.

The steady drip of disclosure of the extent of the financial turpitude left top civil servants exposed as having been supinely complicit in their political masters’ plunder of the public till.

This tale of woe has turned Harapan’s nonagenarian head honcho, Dr Mahathir Mohamad, into a Malaysian version of Hercules before the Augean stables.

Staggered by the extent of the moral failings of civil servants, Mahathir has kept an eye out for civil service reform. A dip into Hong Kong Confidential might usefully aid the process.

The book is replete with cautionary wisdom against the temptation of bureaucrats which the first editor of The Economist Walter Bagehot described with his customary panache as civil servants’ imagination that “the elaborate machinery of which they form a part, and from which they derive their dignity, (is) a grand and achieved result, not a working and changeable instrument.”

Wong’s wry humour and knowledge of the world and Chinese history insulated him against the temptation of bureaucratic hubris.

Before dwelling on the book’s relevance to the issue of how a civil servant ought to comport himself or herself when tugged by the imperatives of duty to the state and service to the government of the day, some details on the author ought to provide perspective.

Wong has been living in Kuala Lumpur since 2009. After two failed marriages and raising three children, he lives the solitary life of a writer in an eyrie in the plusher precincts of the Malaysian capital.

Presently, he is at work on the fourth volume of memoirs.

Wong is fairly sure the fourth instalment would not wrap up all he has to tell about his life which is a composite of experience as a journalist, civil servant, corporate manager and author, spent in such places as Hong Kong, Singapore, Australia, California (where at Stanford University he gained a BA with distinction and an MA to boot), Holland (where he did his postgraduate study) and England (where corporate and authorial affairs took him).

The problem with completing an editorial inventory of a multifarious life is that illness-free time may not be sufficient for the author to finish the compilation.

Wong suffers from macular degeneration, a condition that makes it difficult for him to read over long stretches. He husbands his vision by writing in brief bursts – and reading in still shorter spells.

However, a supple prose style and a prodigious ability to recollect the past is reason for optimism that Wong will complete the chronicle before his lease is up. Clearly, staying in touch with the muse does redound to a prolonged stay against mortality.

‘I write therefore I live’

In literary history, there have been cases of writers willing themselves to complete an unfinished oeuvre in the face of encroaching illness, a retooling of René Descartes’ formulation as “I write therefore I live.”

Wong had already written two novels and five volumes of internationally acclaimed short stories before starting on his multi-volume memoirs.

Having read his short stories, one could surmise the writer in him has emerged from an oyster-bed of a beset early life as a journalist and, before that, an angst-ridden boyhood in which the divorce of his parents left him lonely in the claustrophobic confines of his grandfather’s extended family in Singapore.

Suitably, he has kept memoir-writing for the sunset of his life, the better to sum things up with the sapience of age.

Hong Kong Confidential is the third volume of his memoirs, the earlier two being Adrift: My Childhood in Singapore and Hong Kong Fiascos: A Struggle for Survival.

Adrift, as the title indicates, is an account of his boyhood and teenage years in Canton, Singapore and Perth, the last-named place was where he lived out the years of World War II as a penniless refugee.

Hong Kong Fiascos is a chronicle of the early part of his years as a civil servant, while Hong Kong Confidential is a narrative of the later period when he occupied posts in the upper echelons, roles that not infrequently placed him on the horns of daunting dilemmas.

The fact that Wong came from a politically conscious family accentuated the pain of those quandaries.

It was a family that felt keenly the humiliations inflicted on China by imperial powers in the 19th century and first half of the 20th, when a bedraggled people and its fractious leaders were forced to acquiesce to unequal treaties and extortionate concessions.

Not infrequently, in Hong Kong Confidential and Hong Kong Fiascos, Wong alludes to one or the other of the humiliations, as if the act of peeling back the scab and exposing the psychic wound below heightened his determination to avoid doing anything that would let down the hoi polloi in Hong Kong.

Certifiably a scion of the Chinese intelligentsia, Wong’s paternal grandfather went to medical school in Hong Kong, worked under the British there before being transferred for work in Singapore in 1900. His maternal grandfather was the first Anglican Bishop of Canton.

The elder medic was a strong supporter of Chinese revolutionary leader, Dr Sun Yat Sen, in the latter’s struggle to overthrow a tottering Ching dynasty.

Wong’s pedigree accounted for his sensitivity to the impact on the man-in-the-street of measures proposed for the alleviation of problems in the city-state.

These problems arose in fields ranging from aviation to power generation, housing to hawking, and in public transport. On occasion, Wong had to grapple with organising relief when natural disasters struck.

Not the least of the skills he acquired were the delicacy and diplomacy necessary to assuage the irredentist impulses of Hong Kong youth brought up in a Eurocentric education system that could not smother their feelings for the motherland, especially when these were stirred by territorial disputes between China and one or the other of former imperial powers.

From time to time, seeking to resolve thorny issues, Wong felt the tug of conflicting imperatives while enmeshed, as the blurb on his book felicitously has it, “on a three-horned dilemma: how to serve the people of Hong Kong who paid his salary; the wider Chinese nation to which he was culturally and emotionally inseparable; and the demands of the British crown, to which he had publicly sworn his allegiance.”

Wong brought to his role deep knowledge of Chinese history, particularly of civil servants famed for the way they steered a course between imperial behest and societal good, between a weak emperor and his venal court on the one hand and a populace in need of protection from peremptory edicts and punitive taxes.

Wong reminds readers that China’s meritocratic 2,500-year old system of selecting public servants on the basis of grades obtained in the periodic Imperial Examination was adopted by Europeans in the 19th century.

While Hong Kong Confidential is clearly part of the genre of postcolonial writing where the standpoint is that of the subject talking about experiences under the heel of empire, it does not exclude or scant perspectives from the British standpoint, which Wong’s elevated position in the service afforded him the opportunity to evaluate.

He gained much from observing the attitude of John Cowperthwaite, Hong Kong’s financial secretary from 1961 to 1971, who was sedulous in looking out for the interests of the people of Hong Kong.

Cowperthwaite’s pragmatic bent imbued him with a suspicion of the foggier aspects of economic nostrums espoused by experts from the grooves of academy.

For Wong, this heterodoxy was reinforced by an encounter with Alec Douglas-Home, the former British prime minister and later foreign secretary whom he had to accompany on the dignitary’s visit to Hong Kong in 1973.

Douglas-Home’s candour and honesty had a bracing effect on Wong. He had volunteered the opinion that as prime minister, he had to face two sets of problems. One set was political which, he observed, were insoluble and the other was economic which he held to be incomprehensible.

As a civil servant, Wong’s grasp of the multiple facets to an issue or situation steered him towards navigating the shoals in ways that sought the most sensible and practical resolution.

Service as a civil servant, in Wong’s telling, is a public trust. Clearly, from his performance in the Hong Kong colonial civil service, his deportment placed him in a direct line of descent from the Imperial Examination mandarinate.

Hong Kong Confidential makes the case for comparable rigour in the testing and admission of candidates to a country’s civil service, and for the inculcation of an ethical code that the sage Confucius made famous and de rigueur for the corps that stand between the executive political class and ordinary citizens.

His book is a compelling text for a Malaysian civil service whose derelictions have brought a once competent service to rack and ruin.

One thought on “The Makings of a Civil Service Mandarin”