Who Killed The Weekly Standard?

The bureaucratic mind has a temporary triumph. 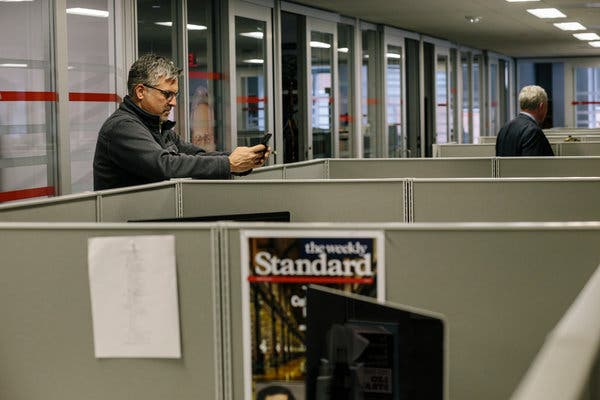 Steve Hayes, Editor in Chief of The Weekly Standard, at his office in Washington.Credit Credit Lexey Swall for The New York Times

I’ve only been around Phil Anschutz a few times. My impressions on those occasions was that he was a run-of-the-mill arrogant billionaire. He was used to people courting him and he addressed them condescendingly from the lofty height of his own wealth.

I’ve never met Ryan McKibben, who runs part of Anschutz’s media group. But stories about him have circulated around Washington over the years. The stories suggest that he is an ordinary corporate bureaucrat — with all the petty vanities and the lack of interest in ideas that go with the type.

This week, Anschutz and McKibben murdered The Weekly Standard, the conservative opinion magazine that Anschutz owned. They didn’t merely close it because it was losing money. They seemed to have murdered it out of greed and vengeance.

John Podhoretz, one of the magazine’s founders, reports that they actively prevented potential buyers from coming in to take it over and keep it alive. They apparently wanted to hurt the employees and harvest the subscription list so they could make money off it. And Anschutz, being a professing Christian, decided to close the magazine at the height of the Christmas season, and so cause maximum pain to his former employees and their families.

The closing of The Weekly Standard is being told as a Trump story, as all stories must be these days. The magazine has been critical of Trump, and so this is another example of the gradual hegemony of Trumpism over the conservative world. That is indeed the backdrop to what happened here.

But that’s not the whole story. In reality, this is what happens when corporate drones take over an opinion magazine, try to drag it down to their level and then grow angry and resentful when the people at the magazine try to maintain some sense of intellectual standards. This is what happens when people with a populist mind-set decide that an uneducated opinion is of the same value as an educated opinion, that ignorance sells better than learning.

In that sense, the closing of The Standard resembles Chris Hughes’s destruction of the old New Republic. This is what happens when the commercial forces trying to dumb down the American media run into a pocket of people trying to resist those forces.

I was on staff when The Standard was founded, by Bill Kristol, Podhoretz and Fred Barnes. They gathered the most concentrated collection of talent I have ever been around. The first masthead featured Charles Krauthammer, P.J. O’Rourke, Robert Kagan, David Frum, Chris Caldwell, Matt Labash, Tucker Carlson and the greatest political writer of my generation, Andrew Ferguson.

Early issues featured the writings of Tom Wolfe, Gertrude Himmelfarb, James Q. Wilson and Harvey Mansfield. The person at the bottom of the editorial masthead, a young Neomi Rao, has just been nominated to replace Brett Kavanaugh on the U.S. Court of Appeals.

The Standard was conservative, but it frequently dissented from the Republican establishment and delighted in modern pop culture. The staff was never unanimous about anything. The many flavors of conservatism were hashed out in its pages. If it stood for anything, I would say it stood for this: that the good life consists of being an active citizen and caring passionately about politics; that it also consists of knowing something about Latin American fiction, ancient Greek culture and social impact of modern genetics; that it also consists of delighting in the latest good movies and TV shows, the best new cocktails and the casual pleasures of life.

Over the past year, under the editorship of Steve Hayes, the magazine was as good as it ever was. Adam Keiper did brilliant work with the back of the book. Amazingly talented young writers were recruited, like Adam Rubenstein, Alice Lloyd and Haley Byrd. If you look at the issue now online — the last that apparently will ever go online — there’s an article calling on Republicans to respect due process, a look at what can be done to bring down the suicide rate, an essay by literary critic Paul Cantor on “Frankenstein” at 200 and a piece on the sixth-century Roman poet Maximianus.

Over the past few years, if all the stories are correct, McKibben tried to change the tone of the magazine. He tried to get The Standard to hire highly partisan shock-jock screamers. He tried to tilt it more in the direction of a Republican direct mail fund-raising letter. When these efforts were blocked, resentment flared and the ax fell.

The Standard is now gone, but the people and ideas The Standard nurtured will continue to flourish. The talented young people who were fired this week will go on to have brilliant careers; the courage and integrity Hayes has shown during the Trump era will continue to inspire, while the drab corporate bureaucrats fade into the sand.

An earlier version of this column misspelled, after the first reference, the surname of the man in charge of the company that owns The Weekly Standard. He is Ryan McKibben, not McKibbin.

David Brooks has been a columnist with The Times since 2003. He is the author of “The Road to Character” and the forthcoming book, “The Second Mountain.”

A version of this article appears in print on Dec. 18, 2018, on Page A23 of the New York edition with the headline: Who Killed The Weekly Standard?.