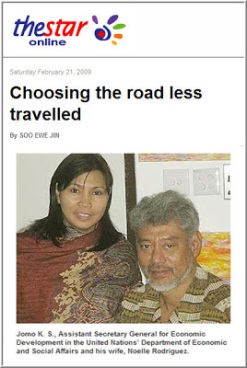 Jomo, 66, a former assistant secretary-general for Economic Development in the United Nations, is an expert in political economy of development, especially in the Southeast Asian region .Jomo received RM200,000, a trophy and a certificate.

The National Academic Figure award is presented to academicians who are committed, wholly engaged and always contributing to the discovery and development of knowledge, wealth generation and fulfilling the aspirations of the tertiary institution as a national development vehicle.

Meanwhile, Juan Joon Ching, a professor with Universiti Malaya, was announced as the most promising academician award winner. This award is given to affluent scholars under the age of 40.

Earlier, Mahathir in his speech expressed hope that the awards would motivate the individuals to pursue further excellence while setting a benchmark for others to emulate.

“Without their (academicians’) support, I believe we cannot build a knowledgeable generation that is par excellence, and at the same time produce balanced individuals for the development and progress of the country,” the Prime Minister said.