When it comes to ICERD, New Malaysia is the Old Racist Devil again–BACK TO UMNO 1946. This time with PAS

I said the old devils are at it again,

And it’s right now like it was back then,

The old devils are at it again.

COMMENT | In an interview, DAP’s Lim Guan Eng was reported to have said “the situation needed to be pacified, it should not stop people from continuing to express their views on ICERD (International Convention on the Elimination of All Forms of Racial Discrimination).”

Really? So, let me get this straight. 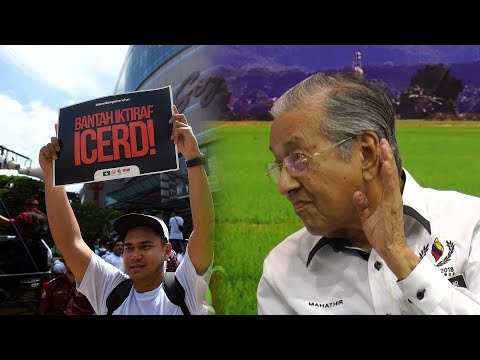 DAP, the purveyors of the Bangsa Malaysia Kool-Aid, wants people to express their views, even though it has warned the Chinese community (and others) to be wary until after the December 8 anti-ICERD celebration?

So, the Finance Minister of this country, who has made these tirades about speaking the ‘truth’ even though it is economically or politically disadvantageous to do so, suddenly seems to have lost his ability to speak when it comes to the issue of ICERD.

But don’t worry folks, I am sure you will speak up on this issue, even when Lim, if asked to comment, will just deflect, leaving you holding the bag.  Another DAP leader, says this country needs a vision which highlights the virtue of the middle ground.

When politicians babble on about the middle ground, what they forget to tell you is that it is contextual. Here in this country, when I talk to people about what they think the middle ground is, they speak of middle Malaysia with two definitions. 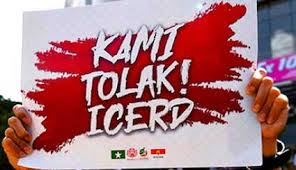 The first is the social contract. It is not a real document but rather it is an unspoken understanding. The middle ground is that there are policies and ideologies in place that benefit the majority, and as long as minorities can exist comfortably, albeit with limited freedoms, they must not question the inequalities of the system, even if that system which claims to “uplift” the majority is in reality detrimental to the community.

The second definition was borne out of the political turmoil that split the Malay community when Anwar Ibrahim was ejected from the UMNO paradise. Or at least, that’s the narrative that we are most familiar with.  This middle ground is defined by concepts like equality, secularism and numerous other progressive ideas championed by the urban educated electorate.

So when people talk of Bangsa Malaysia for instance, they are really talking about the idea that everyone is equal in law and the aspirations to certain fundamental freedoms that people in other countries take for granted.

Here’s the thing though, ICERD was that vision of a middle ground that Pakatan Harapan claimed fidelity to. It is in their manifesto and the rhetoric of the more outspoken members of its coalition.

Rational (Harapan-aligned) critics of ICERD did not make the argument that the treaty would destroy the Malay community because they could not point to anything that did that.

What they argued was that the ratification of ICERD would be politically disadvantageous – or so they claim – and that the present government would lose its credentials as protectors of race and religion. This neatly falls into the first definition of the middle ground.

The reality is that ICER was a symbol and a declaration which is actually a baseline for functional democracies for the second definition. The religious far-right who oppose Icerd did so because they believed in the supremacy of their race and religion. What Icerd did was to say everyone should be equal.

By not ratifying Icerd, the government did two things. First, it legitimised the views of people like PAS president Abdul Hadi Awang. This really does not bother me. Hadi is the politically incorrect face of Malay supremacy.

As I said earlier – “The funny thing is that state governments controlled by the opposition bend over backwards to accommodate Muslim preoccupations and have to continuously defend themselves against charges of racism and yet the mainstream Malay establishment does not disavow someone like Hadi.”

Think of it this way. Has any Malay-Muslim Harapan politician come out and say that Hadi is wrong when it comes to issues of race and religion? Have any of these politicians offered an antithetical view of Hadi’s numerous toxic narratives?

Sure, some political operatives have made meek protestations and gingerly attempted to offer a counterview, but nobody has had the cojones to say Hadi’s view of Islam is wrong.

So I am not so worried about the first point because the foundation of mainstream Malay politics is racial supremacy, but what has happened over the years is that mainstream Malay power structures have done a reasonable job in balancing Malay and non-Malay expectations so we did not turn into just another failed Islamic state.

This was not the UMNO decades-long hegemon playing to the gallery. This was a supposed multiracial coalition telling the racial and religious far-right that they were afraid to confront them even though they had federal power.

It sent a signal that the Harapan government could be brought to its knees when the issues of race and religion are used. The problem here is that the racial and religious far-right could turn every issue into a religious or racial issue and by attrition, bring down a democratically-elected government.

If this sounds scary, it really isn’t. What the Harapan government should do is determine which kind of middle ground they want to occupy. This would mean jettisoning those ideas which they have long promulgated to rile up the base.

Chin Tong is wrong when he talks about a non-Malay periphery electorate wanting to fight fire with fire. What they want – and I doubt they are a periphery – is for Harapan to occupy the second definition of the middle ground. This puts them in conflict with those who view the first definition as pragmatic and conducive to maintaining power in this system.

Harapan, and the DAP specifically, has to find its scrotal sac and define the middle ground even if it means acknowledging that there is no new Malaysia, only a BN Redux.

S THAYAPARAN is Commander (Rtd) of the Royal Malaysian Navy.The views expressed here are those of the author/contributor and do not necessarily represent the views of Malaysiakini.

17 thoughts on “When it comes to ICERD, New Malaysia is the Old Racist Devil again”