As 2018 comes to a close it is worth taking a look at the environmental trends throughout the year, with a special emphasis on those within the last six months or so, in order to gain an understanding of what has been happening to this region’s natural heritage and so that we might know what to look for in 2019—and how to address the upcoming challenges. 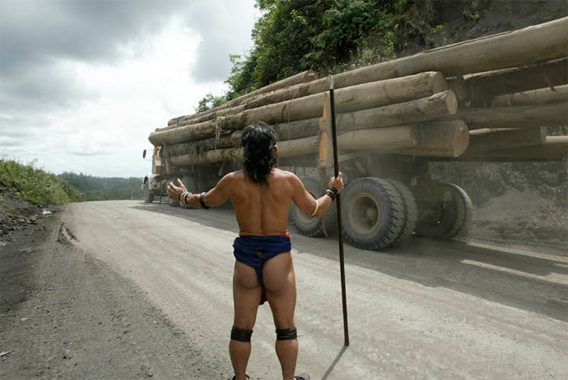 While we can say that a lot has been happening everywhere, and this is especially true for Malaysia. The country produces durian that Chinese consumers covet. This means rain forests that are currently home to tigers are being converted into plantations so that more and more of the spiky, pungent fruit can be sold to China. That means bad environmental news, with China the driver. Furthermore, clearing forests will drastically reduce the number of pollinators such as bats and other wild animals, which will in turn lower the durian’s quality.

Another fruit—palm oil—is almost always the whipping boy for conservation problems in Malaysia (and beyond), however, the country is making headway in its own sustainable certification program, which attempts to incorporate Environmentally Sensitive Areas (ESAs) into development blueprints across Malaysian Borneo. Nonetheless, huge development projects in Peninsular Malaysia are pushing the environment to the breaking point, with gargantuan Chinese-funded residential projects such as Forest City across the strait from Singapore serving as a striking case in point. 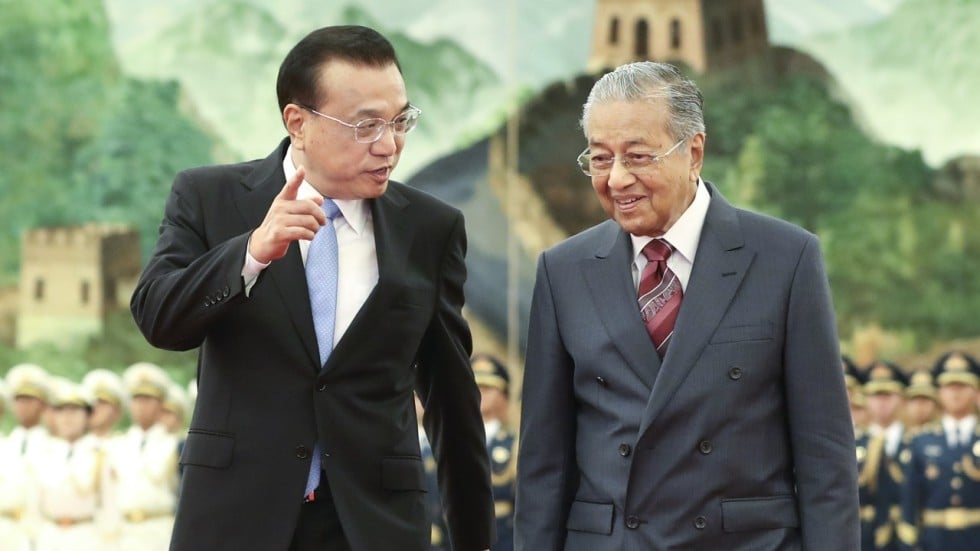 However, Prime Minister Mahathir Mohamad recently shut down several Chinese Belt and Road projects.  Malaysia also wants to ban importing plastic waste, as well as single-use plastic straws. Nonetheless, serious problems remain. Even without the durians-to-China issue, tiger numbers are tumbling fast, scenic Langkawi island is coming under so much stress that it may lose its Unesco status, while in Sarawak the forest-dwelling Penan indigenous group continue to block bulldozers and fight for their traditional lands. 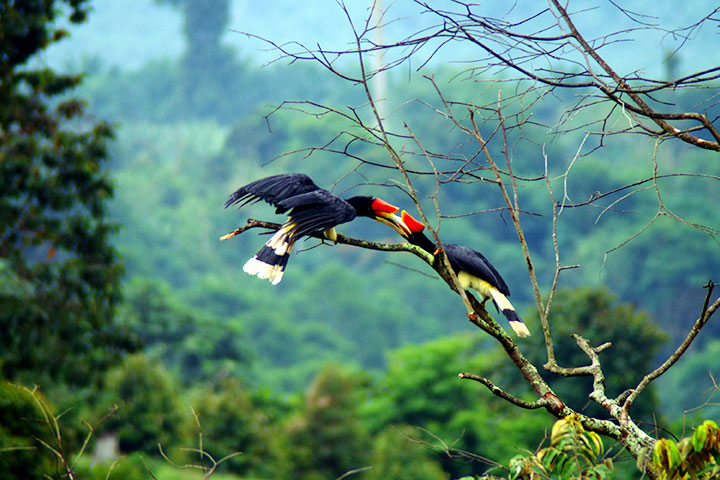 Tabin Wildlife Reserve is located in the eastern part of Sabah, Malaysia

However, a rehabilitated Bornean orangutan was successfully rewilded in Sabah’s Tabin Wildlife Sanctuary, the first orangutan to fully return to the forest after such a long spell in captivity and rehabilitation, and a clouded leopard was sighted within the vicinity of a local hospital.

Across the Strait in Indonesia ecological issues are festering as well. While a new species of songbird has been identified on Rote Island, five other bird species have lost their protected status. The endemic Sumatran laughing thrush is fast disappearing, while the Helmeted Hornbill is relentlessly persecuted in Indonesia. The caged bird trade is bringing many species to the brink of extinction in the archipelago, and biologists say many forests where they work are becoming increasingly “quiet.”

Forest fires raged in South Sumatra and Riau provinces in 2018, and Chinese developers are stubbornly pushing ahead with a hydroelectric dam in the , home to the rarest species of orangutan in the world. The Critically Endangered Sumatra rhinoceros is still in big trouble but there is a movement on to save it, while a pregnant Sumatran tigress was caught and died in a pig trap in Riau.

Like Malaysia, Indonesia has a major palm oil problem, but the country’s anti-graft department says it’s ready to take action against transgressors who are felling natural forest and breaking other laws. Sadly, the Bali government wants to build an elevated highway right on top of some of its last undeveloped sandy beaches. The small volcanic island of Krakatoa in the Sunda Strait between Java and Sumatra has spewed lava and ash this year.   Widespread deforestation, poaching, overfishing, and plastic pollution has been taking over this island nation. Indonesian Presidential contender Prabowo has said that if he is elected to office he will review China’s Belt and Road plans, which could include a cancellation of the , and a court in Aceh recently threw down its stiffest penalty to date for two men caught trying to sell a tiger pelt.

Asia Sentinel recently reported on the surprising number of wildlife to be found in Singapore today. Thailand also received high environmental marks in a recent Asia Sentinel critique, however, Thai-language media recently uncovered a story about a Vietnamese national caught with tiger bones in the kingdom— particularly worrying report as Vietnamese poachers are among the most tenacious in Asia.

Making matters worse, a new and improved road through Kaeng Krachan National Park will likely lead to greater disturbance to the forest’s wildlife, while a few provinces to the north a Burmese national gunned down a binturong. There is rising sentiment to build a Kra Isthmus Canal in Thailand. A large crocodile was caught off the Krabi coast, a whale shark was recently spotted of Koh Racha, and local conservationists have thus far succeeded in fending off a new marina development project in Phuket. However, the deluge of Chinese tourists into the kingdom is pushing Thailand to its breaking point, and it was largely Chinese tourists who are responsible for the closing of Maya Bay in Koh Phi Phi, which remains closed indefinitely so that it can recover.

In Laos, the Nam Theun 2 Dam has been such a disaster that its main financer, the World Bank, has thrown in the towel and walked away.  In Dead in the Water: Global Lessons from the World Bank’s Hydropower Project in Laos contributing author Glenn Hunt remarks: “For one of the pillars that was supposed to be the primary source of income, it’s been an unmitigated disaster.” With about 140 dams either under construction or on the drawing board in its quest to be the “battery of Asia,” Laos faces the potential for most disasters and large-scale environmental and social degradation in a country that has already lost its wild tigers, leopards and many other species.

Despite the tragedy that unfolded in Attapeu province when a large dam collapsed, Laos remains bullish about constructing more dams. And the dam-building frenzy is harming the environment and wildlife all around the country. And while a recent Guardian write-up describing the fantastic-look Nam Et-Phou Luey ecotourism program up in the north of the country describes a healthy tiger population in this region, perhaps the author was given old data.

Wild elephants are reportedly being skinned alive in Myanmar to satisfy a new Chinese demand—for “blood beads,” which are blood-filled chunks of elephant fat. The previous link provides a window into some twisted tastes: “The online trader wants his customers to know the elephant was skinned quickly, with blood still fresh in its veins.” Chinese demand for elephant skin used in bags in jewelry was already shocking, but things can always get worse when it comes to wildlife.

But in more uplifting news from the country, Irrawaddy dolphins are being given greater protection, and the government is also cracking down on illegal wildlife trade in the city of Yangon.

Taking note of how poorly elephants working in tourism are treated across Asia, Vietnam has launched the region’s first “ethical elephant experience.” The country has also taken an interest in seeing that its shrimp farming industry become more sustainable, while the government also recently signed a deal with the EU that promises a reduction in illegal logging (though some in neighboring Cambodia have serious doubts about this). We reported earlier this year that Vietnam’s wildlife is in rough shape, and things haven’t taken much of a turn for the better since.

And finally, Cambodia.  A recent camera-trap check in Virachey National Park so delighted the Ministry of Environment that he shared some of the photos on their Facebook page; even the Thai media took notice of the results. Asia Sentinel reported earlier this year that Cambodia is probably the last hope for Indochina’s wildlife, and this still holds true, despite the fact that nearly 110,000 snares were found in a single national park. A man was recently killed by a wild boar near the Cardamom Mountains, while Kratie province is cracking down on illegal mining, and at the same time the central government is demanding that villagers who grabbed national park land return it.

In other news from the region, the Maubere tribe of Timor-Leste is bringing back ancient customary laws to help protect its forests, seas, and coastline. Chinese demand for logs is wiping out the forests of the Solomon Islands. India is losing tigers and elephants, while two elephants were struck by a train and killed in Sri Lanka.

As always, China casts a menacing shadow over Southeast Asia, and nowhere is this more clear than on the Mekong River and in the South China Sea. The region, with the help of the US and Japan, must find a way to manage Chinese aggression in the South China Sea and beyond, and the some of the numerous dams that it has planned for the region have to be cancelled or scaled down.

Beyond that, Chinese citizens have to be educated about wildlife product consumption, including shark fins, tiger parts, bear gallbladder, elephant skin and blood, and much more, which have no known scientific value. And in a shocking and disturbing announcement,  China has said that it will lift its decades-old ban on the trading of tiger parts and rhino horn, a move that will almost certainly put these species in greater danger.  Or else one of the most biologically rich regions of the world loses everything that made it so special.

Gregory McCann is the Project Coordinator of Habitat ID, and the author of Called Away by a Mountain Spirit: Journeys to the Green Corridor. You can support his conservation projects in Cambodia and Sumatra here.

5 thoughts on “2018 in Environmental Review for Southeast Asia”