“Our fight is a fundamental fight against both of the old corrupt party machines, for both are under the dominion of the plunder league of the professional politicians who are controlled and sustained by the great beneficiaries of privilege and reaction.” – Theodore Roosevelt

COMMENT | I just do not get it. There seem to be two narratives when it comes to this idea of a unity government. The first is about how Pakatan Harapan de facto leader Anwar Ibrahim and his coterie are working in a sub rosa fashion with UMNO to form a unity government, while the second is about how UMNO is going, hat in hand, to Malay power structures in Harapan to cease being a “government in waiting.”

What I don’t understand is why people really think that the big bad wolf is still UMNO, as if it will be the catalyst that would down the Harapan regime. The existential threat to Harapan is not UMNO, but an ideology that paralyses any progressive destiny of Malaysia… Harapan needs a strong Malay mandate if they are to throw their weight around in a multiracial, multi-religious coalition, which they have never been comfortable with.”– S. Thayaparan

Both narratives are false because the reality is that a unity government is already forming. What I don’t understand is why people really think that the big bad wolf is still UMNO, as if it will be the catalyst that would down the Harapan regime. The existential threat to Harapan is not UMNO, but an ideology that paralyses any progressive destiny of Malaysia. 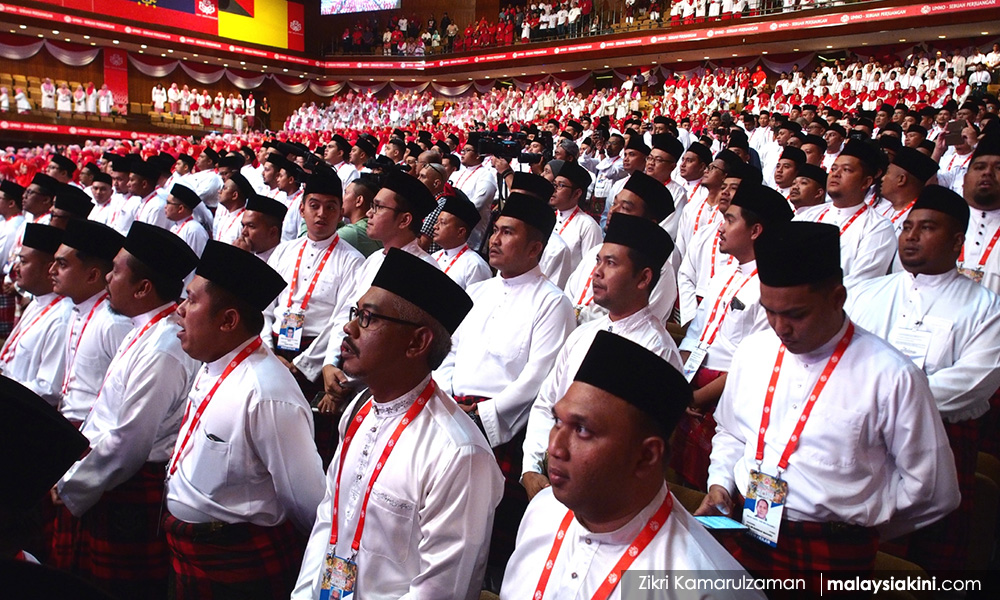 UMNO does not have to form a unity government with Harapan before the next election – because by the next election, there will be no UMNO. When the old maverick and now Harapan’s Dr. Mahathir Mohamad claims that UMNO is finished, it is not because the people voted UMNO out. The party still has support of the majority of the Malay community.

What is going on now is a war of attrition within Malay power structures, which means that UMNO rats are abandoning ship and heading to other ‘Malay’ lifeboats.

Malay power structures in PKR and Bersatu have openly said they would accept UMNO into the fold. While they make weak qualifications of membership, the reality is that Harapan needs a strong Malay mandate if they are to throw their weight around in a multiracial, multi-religious coalition, which they have never been comfortable with. The old maverick knows this, and so do the political operatives – Malay and non-Malay – within Harapan.

PKR lawmaker Wong Chen , in dismissing the idea of a unity government, rightly pointed out that – “That question is best addressed to Bersatu because UMNO members are leaving to join Bersatu.”

People pay attention to the power brokers of UMNO jumping ship, but the reality is that UMNO has been haemorrhaging grassroots members to Bersatu, and to a lesser extent, PKR.

While PAS may have picked up some support because of the new anti-Mahathir feeling of some UMNO members, the biggest draw by far has been Bersatu, which is seen as the new face of Malay politics.

While some folks have no problem demonising Anwar for his apparent racial and religious politics, the fact is that Bersatu as the so-called champion of Malay rights and Islamic superiority is the main draw for people who want to abandon UMNO.

My reading of why Anwar is blathering on about race and religion is that because he understands that the Malay vote base is more comfortable with a race-based party like Bersatu, and not a nominally multiracial outfit like PKR.

Indeed, Bersatu benefits from Anwar’s and Deputy Prime Minister Dr Wan Azizah Wan Ismail’s rather silly pronouncements, because eyes are diverted away from Bersatu and the old maverick’s shenanigans when it comes to policy decisions, the Harapan manifesto, and the ambivalence towards the rising tide of Islamic provocations in this country.

Not to mention, the old guard of Umno who really did not like former president Najib Abdul Razak is working the levers ensuring that Bersatu is the main beneficiary of those exiting the former ruling party.

While Anwar may say that he has no fear of Mahathir and his personal relationship is good, his actions and those of his supporters betray the deep anxiety they have of the way the political terrain is shaping in this post-Umno reality.

So the old maverick does the needful and reiterates his pledge that Anwar would be the next prime minister. But you have to wonder if Mahathir is saying this amid talks of a unity government, doesn’t it just further the narrative that Anwar is impatient, which inflames the Harapan (non-Malay) base against his former protégé, because the majority of the Malay base is already skeptical?

People who think that the destruction of UMNO is some sort of closure to the racial and religious politics in this country are fooling themselves. Beyond the urban centres where Bersatu and PAS are eventually going to have their showdown, the politics of race and religion will be the battleground. This will seep into the urban enclaves. It always does.

Back in the day, Dr. Mahathir, the current Prime Minister had no problem with the help of his non-Malay counterparts launching offensives against PAS, but at the same time, working the Islamic angle to his advantage.

Many UMNO supporters who are thinking of jumping ship tell me that what they see forming is a return to the old days, when the Chinese and Malays were “working together” under the great Mahathir. They see this as a return to the glory days. This is swell for them, but it was then that the roots of destruction of this country were planted.

Rational Malaysians should not buy into this propaganda of a unity government pushed by the political elites. The narratives that Harapan rejects any form of unity government, or that some in Harapan are working towards this aim, should be rejected.

Remember, the ‘Ketuanan’ system that many in UMNO find appealing has been replaced with the slowly forming pillars of BN Redux – “don’t spook the Malays” and “coming as close as we can to get the government to say those laws are wrong.”

The second is the compromise with non-Malay power structures, which is the easy power-sharing formula that worked so well at the height of Mahathir’s reign.

In the current climate, there will be more big-name casualties when it comes to the malfeasance of the Najib regime, and there will definitely be more defections – after a suitable period of contriteness of course – of UMNO members to Bersatu and PKR.

Anwar’s Port Dickson gambit will determine if he remains a player when it comes to this high-stakes Malay political game. But make no mistake, the unity government is already forming, and while the body of UMNO will be destroyed, its soul will find a new vessel.

9 thoughts on “BERSATU They Stand: Bersatu, the new face of Ketuanan Melayu Politics?”