Sabah and Sarawak: Give Our Freedom and our Rights Back

The recent announcement by Tun Dr. Mahathir that the Pakatan Government is committed to returning Sabah and Sarawak their rightful status as equal partners in the federation can be seen in two ways.

If this announcement made in the Prime Minister’s first address to Sabahans since the new government came to power is a sincere commitment and quickly implemented in the key areas of concern in which the two East Malaysian states have had their status and rights undermined and their legitimate needs neglected, then it can help open a more amicable, less contentious and more stable chapter in the nation’s history and development.

However, if it is another political wayang speech aimed at generating a feel good response in the local population, it will reinforce the skepticism and cynicism that the Bornean states will still be treated as “stepchildren” by the new Pakatan government and that nothing will come out from Pakatan’s election manifesto promise of returning the status of the two states according to the Malaysia Agreement of 1963 even after many more than 100 days of the new government has elapsed. Don’t open the flood gates of discontent and nationalism. 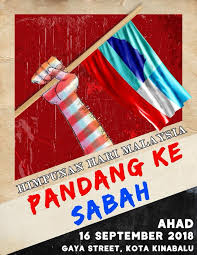 If the latter is the case and/or if the process of the return of local rights and autonomy is delayed by foot dragging or deflected by the politics of disruption and divide and rule as practised by the Barisan Nasional government since the establishment of Malaysia  in 1963, we should not expect a meek or restrained response from an awakened and politicized younger generation of East Malaysians.

Rather, watch out for heightened political resistance from the East Malaysian states which may put the entire Malaysia enterprise in jeopardy.

What is Equal Partnership?

The call for an equal partnership of the three component parts of Malaysia is not simply about a greater share of cabinet minister-ships for the politicians of Sabah or Sarawak or a greater share of oil royalties or better roads. It is also not about just mobilizing a two thirds majority in Parliament to support amendments in the Federal constitution for Sabah and Sarawak to be equal partners in the Federation with the process ending there. Or providing East Malaysians the solitary carrot of a Deputy Prime Minister.

It covers a much larger and complex spectrum of perceived injustices, discriminatory treatment and broken promises endured by the two states especially during the past 30 years.

According to pro-equal status activists, key grouses include the following:

It is noteworthy that when the Cobbold Commission set up in 1962  to determine whether the people of North Borneo supported the formation of Malaysia submitted its report, it had deemed necessary to emphasise the following:

“It is a necessary condition that from the outset Malaysia should be regarded by all concerned as an association of partners, combining in the common interests to create a new nation but retaining their own individualities. If any idea were to take root that Malaysia would involve a ‘take-over’ of the Borneo territories by the Federation of Malaya and the submersion of the individualities of North Borneo and Sarawak, Malaysia would not be generally acceptable and successful.”

This concern has now come home to roost. Today we are seeing more than resistance to the loss of local autonomy promised in the initial Malaysia agreement. New local parties that are emerging are not simply seeking the rescinding of the constitutional amendment of 1983 which downgraded both the states from equal status to one of the 13 states of the Federation. They are also pushing for a larger agenda of socio-economic and political change through return of the rights and interests of the states as enshrined in the 20/18-point Agreements, the London Agreements and the Inter-Governmental Reports.

At the same time, less restrained individual and unorganized groups (through the social media) are also now in larger numbers posing the unthinkable and potentially seditious question as to whether the two states are better off independent than to remain in Malaysia.

What will happen next is in Putrajaya’s ball court.We can expect constitutional change to be a slow and protracted process and to possibly take more than a few years to be successful.

Meanwhile issues of local autonomy especially in economy, education and religion resonate strongly among all communities, especially with the more urbanized and highly educated. The sentiment that the two states has been badly treated by Putrajaya is a widely shared one especially among the young who resent what they perceive as the re-colonization of their state by federal officials pushing the Putrajaya line. These issues can and should be corrected immediately.

However, whilst Putrajaya continues with soothing words about the rebalancing of state and federal rights and powers, the actions of various agencies of government indicate that the old regime’s mindset on race and religion as operationalized by key civil service agencies still remains; and the opposition and intolerance to democratic aspiration for equal status and rights has not changed.

The case of the recent arrests and alleged manhandling of young protesters calling for stronger state rights and demanding equal education opportunities, better public transport and job opportunities among 10 demands is a salutary example.

As one of the leaders of the youthful assembly calling itself Pandang Ke Sabah (Look Towards Sabah) rally noted after the police crackdown on the group of protestors:

“It’s the morning of Malaysia Day, for God’s sake and it was really peaceful. We thought now that we are living in the era of Malaysia Baru, we are free to speak our minds.”

More disappointing and shocking was the recent written reply by the Education Ministry in Parliament that the use of English as a medium of instruction in schools in the two states would violate the Federal Constitution, National Language and Education Act. The new Minister of Education must have approved of this contentious and highly questionable ruling.

In response, Sabah’s  deputy chief minister, Datuk Seri Madius Tangau pointed out that the right to use English as a medium of instruction in national schools was in accordance with the Malay­sia Agreement 1963 and was in no way illegal nor an attempt to challenge Bahasa Malaysia,the national language. He also noted that It was not only not unconstitutional, but a right and the way forward.

Sarawakians and Sabahans can expect many similar instances of Putrajaya’s intransigence and inflexibility before they can win back their equal status and rights.

2 thoughts on “Sabah and Sarawak: Give Us Our Freedom and our Rights Back”