Malaysia: In Defense of the PD Route to Power

“Yond Cassius has a lean and hungry look;
He thinks too much: such men are dangerous”–― William Shakespeare,

“If I want a crown I must go and hunt it for myself.”

– Rudyard Kipling, ‘The Man Who Would Be King’

“Granted, the way that Port Dickson MP Danyal Balagopal Abdullah gave up his seat and the murmurs of approval by Anwar made this whole Port Dickson gambit sleazy, but that is politics.”

COMMENT | With DAP Secretary-General and Finance Minister Lim Guan Eng’s endorsement of the Port Dickson gambit of Anwar and his merry men after the blessings of the current Prime Minister, the PKR leader finally gets his chance to make his move closer to the ultimate prize of sitting on the throne of Putrajaya.

While I have made many public statements against some of the things Anwar has said and done, I never understood the vitriol spewed against him and his claim to the stewardship of this country. If anyone has earned the right to the highest office of this country, it is Anwar.

Let me be very clear, I have been relentless in my criticisms of his words and deeds. However, I still remain one of the few people who think that Anwar should have his time in the hot seat.

I should be the last person writing an article like this, but the events of the past few weeks have muddied the waters when it comes to politics in this country, and I think Anwar and his crew, especially a political operative like PKR Vice-President Rafizi Ramli, have been given a bad rep.

Of course, I have never had a problem venting against them, but my main issue with this Port Dickson gambit is why didn’t Pakatan Harapan come out earlier as an alliance and support this move, instead of having this drama which served nobody, certainly not the people who voted them in?

The fact that all this had to play out the way it did should tell rational people about the kind of moves made against Anwar, and the narrative that Anwar is a power-hungry political operative who does not really care about this country, unlike certain political operatives whose sins were washed away just before May 9 and have been given a free pass.

The political machinations of the elite who decided to use this opportunity to play their power games and manoeuvre various people into possible positions of power is typical ‘Malay politics’, but scapegoating Anwar and his faction is mendacious when everyone is attempting to get theirs.

Is Anwar power hungry? Impatient? Which political operative is not? Some folks are now dismissing the fact that Anwar was a political prisoner. The reason why he has to resort to such tactics is because his rights were flushed down the toilet by the UMNO regime and by some of the people who are now attempting to save Malaysia in the first place.

Say what you like about Anwar’s so-called lust for power, but there have always been political operatives who have stood in his way using legitimate – but most often illegitimate – means to hamper his democratic right to assume the highest office in the land.

When it comes to Islam, can anyone really trust that the Malay political elite would not cave in to the extremists? While Anwar says things that I disagree, as yet he is not in a position to do anything like the other Malay powerbrokers in Harapan. And look at some of the statement emanating from them.

Would this change if he is in a position to actually do something about Islamic extremism in this country? He certainly has said things which coddle the Islamic elites in this country but so have the majority Malay powerbrokers in Harapan. This, of course, is my main concern when it comes to Anwar. Truth be told, it is a concern of mine for most Malay political operatives.

The old maverick has a reputation for coddling but also confronting Islamic extremism in this country. Can we say the same of Anwar? This is what concerns me about Anwar assuming the highest office in the land but since as I said, the other Malay powerbrokers – with a few exceptions of course – are not exactly the egalitarian types, what difference would it make?

Fellow columnist James Chai may have laid it on a bit thick, but I understand the sentiment. Anwar did not inherit a ready-made opposition, he had to cobble one together to wage war against the UMNO hegemon, which at one time included the current Prime Minister, Dr Mahathir Mohamad, who is an extremely influential operative in Harapan and who has his slavish devotees. 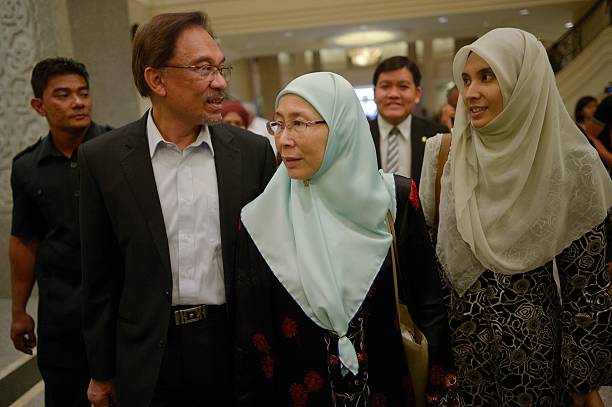 While the various alliances were flawed, what Anwar managed to do was demonstrate that people working together even if in a compromised fashion, could wreak havoc on the UMNO hegemon. This should not only count for something, it means that the “hope” people have sprung from the moves the post-UMNO moves he made.

Anwar did not start a Malay-only party because as the current Prime Minister says, this is the reality of this country. He started a multiracial party, cobbled together an alliance with the DAP and PAS, and in perhaps the best moment of his political career denied BN its coveted two-thirds majority.

However, why replay the greatest hits of a man some say has no role to play in this new Malaysia? Because part of it is wonky thinking on the part of some of Anwar critics. For instance, when Anwar has this ‘que sera, sera’ (whatever will be, will be) attitude when it comes to a future working possibility with UMNO, it is all part of mainstream Malay politics.

How could anyone take exception to what Anwar says when Bersatu is openly accepting former UMNO powerbrokers and regular UMNO members to shore up its base. Anwar’s qualified acceptance of UMNO leader Nazri Abdul Aziz’s support should not surprise anyone, especially those who understand that Nazri always had convivial relationships with many political operatives in the then opposition.

Anwar’s daughter, Nurul Izzah, says she takes charges of nepotism positively, but really, why should she? The opposition is riddled with nepotism most often at the highest level in the form of powerbrokers and political dynasties placing their pawns for future political power.

This is not solely an Anwar problem but the way how some folks talk, it is as if they are blind to what is going on around them.

Admittedly, I played a part in this whole PKR is the weakest link in Harapan narrative, but I also have said, I would take the open fighting in PKR over the nefarious backrooms deals or fascist diktats of some of the other parties in Harapan.

While I am not taking sides when it comes to the whole Rafizi versus Azmin Ali fight, it is far better for voters to understand the power plays at work and pay attention to what these camps say and do when it comes to reform principles for this country. Remember folks, when politicians do not wash their dirty linen in public, we end up supporting their soiled agendas.

The Navy Man who abandoned ship after pledging to serve the people of Port Dickson. Some people think Danyal Balagopal Abdullah made a noble sacrifice by giving up his seat for Anwar Ibrahim.

Granted, the way that Port Dickson MP Danyal Balagopal Abdullah gave up his seat and the murmurs of approval by Anwar made this whole Port Dickson gambit sleazy, but that is politics.

There are many elected representatives who do not care about the people who voted for them and probably are using their seats as stepping stones to profit from the bureaucracy when it comes time to reward their ‘sacrifice”.

Seeing as how the opposition did not believe that they could win May 9, the former may not have been possible, but after winning, they should have made it clear that Anwar was in play for the top job instead of feeding the narrative, relying on the base and the schisms within PKR, to wage a very public war on the Anwar clan.

Will Anwar be the kind of prime minister that his supporters claim he would be? Who knows? Like I said, I am not worried about his reform agenda because apparently, even the old maverick wants reform.

Now the powerbrokers of Harapan are getting on board the Anwar Express but the fact is that all this was unnecessary. Heroes and villains have been created when the reality is all this is because some people cannot stand the idea of Anwar becoming Prime Minister.

Are their concerns legitimate? It would be if reforming the system was a top priority, but this is about personality politics and those “not loyal” to Anwar merely means their loyalties lay elsewhere.

When people say they do not trust Anwar, all I can think, is that you trust other politicians? What I am worried about is Anwar’s infatuation that religion is the lodestar for the Malay community, but this should not detract from the fact that he is no pretender to the throne.

9 thoughts on “Malaysia: In Defense of the PD Route to Power”