Jho Low And The China Issue

They seek him here and they seek him there, but best bets are back on China.  Indeed, earlier today, a Hong Kong radio station reported that Jho Low had most recently fled back from Hong Kong into China, where it claimed he has now been detained pending Dr Mahathir’s visit next month.

Certainly, Malaysia’s newly reinstated veteran leader has made clear he is champing at the bit to get to see the Chinese President, since there are plenty of highly pertinent issues he wishes to discuss, albeit embarrassing to China. Xi Met Mahathir during his visit in 2013,

These, of course, relate to a series of multi-billion dollar mega-projects that Chinese state controlled companies signed up to with the previous premier, Najib Razak, star patron of the man on the run, Jho Low.

All of them have been frozen by the new government, which has been issuing toe-curling statements confirming everyone’s suspicions that the contracts were prime examples of super-corruption, which the Chinese had been prepared to pander to in return for digging its economic tentacles into Malaysia and cementing a strategic control over the region.

They include two pipe-line deals in East Malaysia with the China Petroleum Pipeline Bureau (CPPB), which the Finance Ministry recently disclosed had already received 88% of the agreed payment two years early and when only 13% of the work had been completed.

The Finance Minister and his team have not minced their words when indicating their firm suspicion that the reason for this outrageous outlay was that the project were being used as a front to channel money to repay billions of dollars of debts owed by Najib’s notorious multi-billion dollar slush fund 1MDB.

Likewise, the grossly inflated East Coast Railway, contracted by Najib to China’s unfortunately named China Communications Construction Corporation – or CCCC (C4 was the explosive used to murder a young woman in a particularly murky case linked to Najib and the has become synonymous with cover-up and corruption in Malaysia).

It was Sarawak Report which exclusively revealed leaked documents back in 2016 that showed how this C4 contract also was inflated by 100% at the last moment, following negotiations with Najib to again write of debts and liabilities connected to 1MDB and Jho Low.  The exact repayment details over the next decade were written into a secret annex to the contract, which on the surface had provided merely broad brush calculations to justify the increased expenditure.

Throughout the period when these contracts were being drawn up the already fugitive Jho Low was based in Shanghai, and it is generally agreed that he was acting as Najib’s agent to use the Chinese to get the prime minister off the hook financially and politically after the United States Department of Justice published the exact details of the 1MDB theft in July 2016.

In other words, to save his own skin Najib proved willing to tie up his country in a mountain of debt and obligation to its neighbouring predatory super-power.

Numerous other Chinese funded projects were likewise put underway, in particular the evironmentally catastrophic Forest City, deemed to provide a helpful financial boon to the Sultan of Johore.  Not only was the development a perfect conduit for Chinese wishing to export cash, the project envisaged providing citizenship to a million new immigrants.

Mahathir and his reformist allies in the new Harapan government are naturally furious at all these thefts and deceptions and are demanding a re-negotiation with China, should these projects go ahead at all.  However, the entire episode represents a humiliating debacle for China, which like the rest of the world had mistakenly placed its bets on the politial survival of the unmasked kleptocrat Najib.

President Xi Jinping will hardly relish the prospect of the extent of his country’s bad behaviour and complicity in corruption being paraded on the world stage and it makes Malaysia’s top wanted man into a useful bargaining chip to help save face in the up-coming diplomatic wranglings and renegotiations. 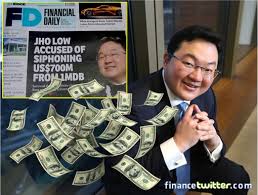 The Long Arm of the Law will get at him shoot.

It remains to be seen if China will hang on to Malaysia’s wanted man, who can tell all over Najib’s kleptocratic dealings (and China’s own involvement) or bargain a deal that includes the renegotiation of key projects in Malaysia’s favour, in return for a polite silence over the more embarrassing aspects of China’s corrupt part in propping up Najib?

Malaysia has its strong advocate in the trenchant Mahathir, but it appears China has a valuable hostage in its hands.

3 thoughts on “Jho Low And The China Issue”