When an Outstanding Banker like Nazir Razak decides to leave before his term of office ends, there’s bound to be speculation. In this particular case, the man who is at the center of this Star newspaper report happens to be  the younger brother of  former Malaysian Prime Minister Najib Razak. “In six years, we have expanded from two branches to 12 branches as well as 14 off-site self-service terminals. We presently have over $450 million in assets, making us the 13th largest commercial bank in Cambodia. We intend to be in Cambodia for the long term and we feel it is important to grow sustainably and to invest in developing our local talent pool. Regionally, CIMB Group is ASEAN’s fifth-largest universal bank. Over the past decade, the group has been one of the fastest-growing banks in the region”. Bun Yin, CEO of CIMB Bank, Cambodia

A Cambodian friend of mine who heads CIMB Bank operations (pic above) in Cambodia alerted me of this possibility a couple of days ago. My response was that he should not listen to rumours.  Chairman Nazir is well known in the Kingdom where CIMB Bank operates a very successful and profitable network of bank branches.

I am not privy to what is happening in the Malaysian corporate scene post May 9 GE-14. I have been away from the country since 2014.  But I hope that the impending departure of Chairman Nazir has nothing to do with politics.  Ideally, I would like him to either remain with the CIMB Group, or be given some key appointment elsewhere so that his talent,  professional  competence, reputation for integrity, and wide experience can be used for  the benefit of the New Malaysia.–Din Merican 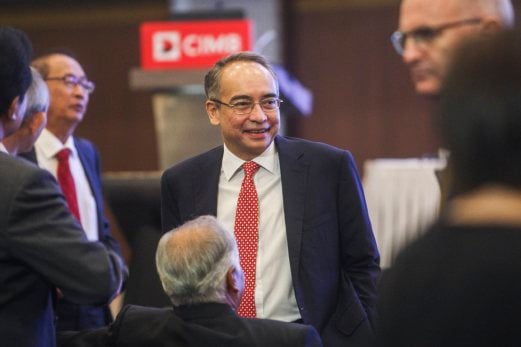 CIMB Group chairperson Nazir Razak will leave the banking group when his term ends next March, reported The Star today.

The youngest brother of former Prime Minister Najib Razak has informed the CIMB Board of Directors that he will not seek re-election as chairperson, a post he has held since 2014.

He has also served as CIMB chief executive officer (CEO) for 15 years. “He (Nazir) has told the board that he will leave and not seek re-election. The board is already searching for a successor,” said the source.

Malaysiakini has contacted Nazir for his response. Speculation has been rife that Nazir could leave earlier than March. The source however said thus far, there has been no indication of him being “told to go”. “He has not been called in by the Council of Eminent Persons (CEP) or anyone else,” the source was reported as saying.

The CEP is headed by former Finance Minister Daim Zainuddin, and was set up to advise the new Pakatan Harapan government on how to achieve its economic promises in 100 days as per its election manifesto.

Nazir is prepared to go earlier than the expiry of his term if he is told to do so, according to another source.