The Confessions of Liar COMMENT | Not so long ago, Najib Abdul Razak was insisting that everything was fine with 1MDB.

Now the narrative is, as my Malay security guard friend put it this morning, “Sekarang buat tak tau” (Now he plays ignorant). His assertion of innocence has aroused a chorus of “liar.”

Leaving aside Dr Mahathir Mohamad’s riposte that his signature on multiple documents give the lie to his claim that he was kept in the dark about the movement of 1MDB money, the best thing I can say for his interview with Reuters is that he confessed to being a dumbass.

The management and board of 1MDB didn’t tell him.When asked if he was accusing them, throwing them under the bus, he trotted out the meaningless phrase – “as a general principle” – they should have told him.

What general principle? Did they or didn’t they tell you? What did the chairman of the financial advisory board of 1MDB do? Wait to be advised instead of advising?

To extend the analogy of the bus, I hope those shoved under it will be spilling their guts.That prospect has prompted Najib to trot out quickly an “I-said-no-such-thing” disclaimer.

So what did he say? A fuller explanation will be forthcoming… I suppose after his media team has figured out how to salvage the situation with another verbal pretzel. 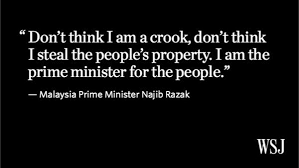 Compounding his confession of ignorance, Najib revealed an equally cavalier, blithe unconcern about the source of the millions, billions flowing into his account.

The power of attorney was in somebody’s hands. How gullibleI would advise him not to ride to the rescue of widows of ex-presidents of Nigeria who have died of cancer, or young women promising to disrobe for the camera after he did so.

Adding to his bad luck, Nik Faizal Ariff Kamil, the man in question, is on the run. Poor Najib. No witness to testify to his ignorance.

He assumed the RM2.6 billion came from the Saudi king. Didn’t think it would be from 1MDB.

What, no thank you phone call to the king? “Yo bro, thanks for the donation. Didn’t expect such a generous donation to influence the course of elections in this country. When can you come for a round of golf?”

Great, the country’s former Finance Minister confesses that he had no head for figures, that he was a clueless, gullible dumbass.And he wants absolution?

Obviously, he still has a hearing problem and can’t hear the people.The jury, much of the people, has decided on his guilt. He is lucky. It is unlikely the government will allow kangaroo courts. A bit of a shame. Would speed things up.

Now the people will just have to be patient while the wheels of justice slowly grind to a verdict, with the inevitable consequent appeals.

In the interview, Najib expressed pride in the film producing career of his stepson Riza Aziz.

The Wolf of Wall Street is one Scorsese movie I didn’t take to. The arc of its narrative was predictable – conmen believing they were immune as money kept pouring in; a piling on of excess; the house of cards collapsing when the authorities come calling.

I got nothing from the predictable story, but Najib could have taken it as a warning.

The film was based on the memoir of Jordan Belfort. Losing his job as stockbroker in a Wall Street crash, he winds up in an outfit flogging cheap junk shares.

There, Belfort developed his successful scam – “pump-and-dump” – convince the gullible that the rock-bottom shares are about to take off. This pumps up the price of the share. Dump it when suckers rush in.

Instead of drawing public opprobrium, a media expose of his methods, attracted a flood of applications for jobs.

It’s party-time, in the office, on a luxury yacht – drugs, prostitutes, buy, spend, be lavish, no need to worry about money, more coming in.

Predictably, excess attracted attention, and the delusion that the law could not touch them led to insider trading which led to the SEC and FBI opening files on the company.

Belfort smuggled cash into Switzerland using his wife and the in-laws of a friend. He lost access to the money. His friends turned on him to get reduced charges and sentences for themselves, and Belfort spent three years in prison. The Joke is on you, Mr. Najib Razak–Sungei  Buloh or Kajang is waiting for you

A divergence would be at the end of the film shows Belfort having a successful career conducting courses on selling. Najib should ask his media team to see if Belfort’s course material is available online. Might help.

There was a scene in the movie (actually two of them if my memory is correct) where Leonardo DiCaprio (Belfort) upends a prostitute, lays a line of coke, and snorts both lines.(I hope you know what I mean. I struggled to find words suitable for this family portal, and I was not sure ‘camel’s toe’ would spare me from being savaged by irate feminists, even if I made reference to National Geographic and Animal Planet.)

Wow, 1MDB money, the PM’s stepson made this movie.

If my friends in Pakatan Harapan weren’t such moral folks and would have been aghast at the idea of gutter politics, I would have suggested they contact a pirate DVD organisation (cheaper and the legal one will have the juicy scenes bit/byte out), and distribute it.

Sex, drugs and rock-and-roll – would have won Harapan a few more Malay votes.

One thought on “The Confessions of Liar”