Reforming ‘cari makan’ politics can be the biggest change of all in ‘new Malaysia’.

Over the past several weeks, much of Malaysia’s elite has been playing the game of ‘pusing’ (Malay for turnaround), or as one businessmen told me, learning to ‘gostan’ (Malay contraction of “go astern”). In popular usage, it means to reverse back. This is how it works: many in the Malaysian elite are now claiming to be closet supporters of Dr Mahathir and the Pakatan Harapan (PH, or alliance of hope) coalition. Some claimed to have secretly “sponsored” the campaigns of PH candidates.

You can bet your sweet beepy that they were many frogs and carma types at his Open House. These types have no honour and dignity left in their  souls.

In an infamous blog entry, Making Beeline to Curry Favour with Dr M, by one of Mahathir’s closest political allies, Abdul Kadir Jasin wrote: ‘Last evening I was invited for a berbuka puasa with the Prime Minister, Tun Dr Mahathir Mohamad, at the Perdana Leadership Foundation (PLF) in Putrajaya… I saw many familiar faces – men and women – who during good and bad times had stuck with THE man… But I also saw many who had been absent from his berbuka puasa and other functions for quite a few years. I felt no sense of remorse when I greeted them with disdain… When Dr Mahathir was in power they celebrated him as if he was a ‘Tua Pek Kong’ (Chinese diety) and man of miracle. He was lavishly praised and even more lavishly feasted… But when he left office but yet continuing to care for the country, many of these people abandoned him for fear that supporting or just being seen with him would jeopardise their billion-dollar contracts, projects concessions, or subject them to the scrutiny of the Inland Revenue Board… The mere mention of Dr Mahathir caused them to cringe…Their hypocrisy and lack shame put me off. But still I accepted their handshake for the sake civility and common courtesy…”

While crony capitalism is found throughout Southeast Asia (yes, even in Singapore), in Malaysia the cronies never had to ‘pusing’ or ‘gostan’ at such a rapid pace. The assumption was that UMNO and Barisan Nasional (BN) would remain in power for the foreseeable future. Thus the 9 May outcome was akin to suffering the first heart attack. 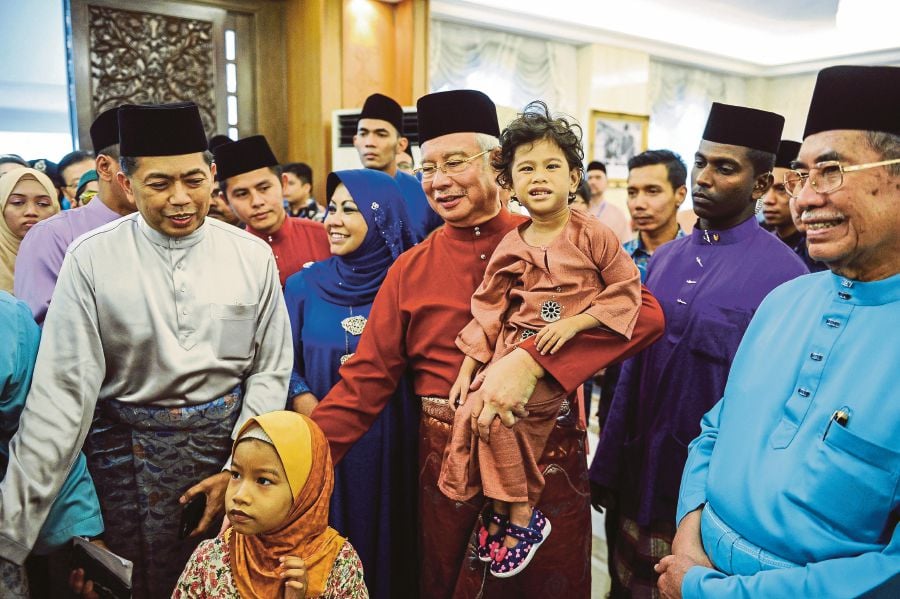 According to Malaysiakini 50,000 came to Tun Dr. Mahathir Mohamad’s Open House, what about the turnout at Najib’s Hari Raya gathering? Most of the Tycoons and his hangers-on have probably abandoned him in droves. That’s life, guys–Din Merican

Unlike the West, political hypocrisy and the practice of switching political support for personal gain in Malaysia is often regarded as simply ‘cari makan’ or earning a living. There is no political shame is ‘pusing’ if the ultimate aim is to ‘cari makan’. In other words, you do whatever is necessary to get the government contract, or better, to get into government. Former prime minister Najib Razak was fond of saying that his political philosophy is ‘Cash is king’. During Najib’s era, ‘dedak’ was the common term used to describe the use of bribes to buy political support.

The culture of ‘cari makan’ had such an omnipresence in Malaysian politics that almost all the tycoons you see today in Malaysia are linked either to Mahathir or Najib. It was an open secret which tycoon was linked to each leader, such that the stock market in Malaysia had ‘political counters’, where certain companies were owned by these tycoons. It is not uncommon for the shares of these companies to move according to the latest rumour regarding the tycoon’s relationship status with the incumbent PM.

Those who came up in the 1980s and 1990s were handpicked by Mahathir and former Finance Minister and now chair of the Council of Eminent Persons Daim Zainuddin. In the past decade, another group of tycoons came up under the patronage of Najib. It was taken for granted that you could not become a business tycoon overnight in Malaysia without connections to the incumbent PM.

‘Pusing’ and ‘cari makan’ politics is most acute in the Malaysian state of Sabah. Not only is it done openly at every elections, it is celebrated with a local word ‘katak’ (or political frog), which essentially describes what happens as entire political parties and just-elected individuals move to the winning side on elections night. For political parties, it’s mostly about getting into government. For individuals, it can mean a sudden cash windfall. Sometimes, you can even ‘katak’ twice or more for such gains.

The most recent example of this was on the night of GE-14, when it became clear that Parti Warisan were in a position to form a new state government – United Pasokmomogun Kadazandusun Murut Organisation (UPKO), a BN-component party, announced it was defecting to Warisan to give it a clear majority to form the next state government. Two days later, four Sabah UMNO state assemblymen defected as well, giving Parti Warisan a clear majority in the state assembly.

In neighbouring Sarawak, two just-elected MPs joined the PH coalition once it was clear PH had formed the federal government. The sole MP from the Sarawak United People’s Party (SUPP) tried but failed to defect to PH.

Across the sea, Malaya is fast catching up on ‘katak’ politics. Within a few days of PH’s victory, five BN state assemblymen defected to PH, giving the Johor and Perak PH state governments their majorities. More would actually like to defect but they cannot do so now because of the raw feelings generated in the recent campaign. It’s likely when things calm down, more elected BN representatives will move to PH.

While many would see these moves as opportunistic, many of those defecting justify it on the grounds that under the present political system, they can only resolve their constituency issues if they are part of the ruling coalition.

When BN was in power, individual BN MPs were given between RM1 to RM5 million ($337,000 to $1.69 million) to spend on their constituencies. Opposition MPs got zero funding. These funds are spent on any events or projects approved by the MP without the need for another layer of official approval. BN MPs would normally use this slush fund for small projects or events to increase their personal support among their constituents. Opposition MPs see the funds as nothing more than blatant vote buying.

Over the next year, expect more UMNO businessmen and opposition politicians to move into the PH camp, all claiming to be closet supporters of PH. The ‘cari makan’ political culture may be the hardest thing to reform in Malaysia – I would say it’s impossible, even under a reformist PH government. It is, at the end of the day, human nature.

One thought on “Katak (Frog) Politics in vogue for New Malaysia”