Kuala Lumpur, Malaysia– Robert Leong left Malaysia about 40 years ago, first for boarding school in Northern Ireland and then to study medicine in Dublin. He went on to the U.S., where he lives in the San Francisco Bay Area and works in biotechnology.

Now, political upheaval back home is making it more likely that ethnic Chinese expatriates like Mr. Leong will return to Malaysia, bringing talent and capital back with them.

The electoral collapse of the ethnic-Malay-based party that ruled Malaysia since independence from Britain in 1957 is raising expectations that the new government will soften or end a decades-old affirmative-action policy that favors the majority Muslim Malay population, often at the expense of ethnic Chinese.

“Would I return? Yes, after allowing time for the new government to settle down and begin implementing reforms,” said Mr. Leong, who is 55 years old. “There is a huge pool of talented and experienced Malaysians living overseas that this new government could tap into.”

Before it was voted out of power last week, the ruling United Malays National Organization gave quotas, handouts and other preferential assistance to Malays to help them catch up with the generally wealthier Chinese. Hundreds of thousands of Chinese Malaysians left the country to seek a fairer hand elsewhere.

The newly elected ruling coalition, led by Prime Minister Mahathir Mohamad—who championed affirmative action during his earlier, 22-year stint in the post—has decried the UMNO government’s “narrow racist rhetoric” and promised to level the playing field by providing support for all Malaysians who need it.

It is a sensitive and closely followed issue both here and abroad. The pledge from the Alliance of Hope coalition offers to ensure that “Malaysians of all backgrounds will enjoy a fair share of this country’s wealth.”

Mr. Mahathir suggested on Tuesday that the best way to encourage Malaysia’s diaspora to return is to expand the economy “so there are more opportunities for people to practice as professionals, as well as invest in this country.” Speaking via video link to a Wall Street Journal conference in Tokyo, he dodged questions about whether he would seek to remove racial quotas.

Removing the affirmative-action program could be difficult, with Malays and other indigenous groups making up more than two-thirds of the country’s 32 million people. 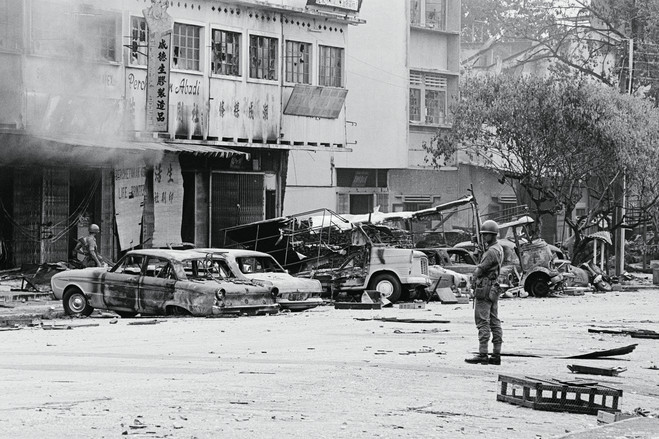 Hundreds of ethnic Chinese were killed in race riots in Kuala Lumpur in 1969. Above, troops patrol streets in the Malaysian capital’s Chinatown. Photo: Bettmann Archive/GETTY IMAGES

The pro-Malay policy emerged after 1969 race riots in Kuala Lumpur in which hundreds of ethnic Chinese were killed. The government introduced an affirmative-action system that, among other things, reserves many spots in college for Malays; they also benefit from subsidized housing and equity ownership policies and dominate the public sector. The programs have helped nurture an ethnic-Malay middle class, to the extent that some Malays in Kuala Lumpur and other cities say they no longer need help.

From the start, many Chinese Malaysians, unsure of finding spots in universities or getting scholarships, began sending their children to Australia, the U.K. and America. “That’s how the exodus began,” said Jason Wong, 23. “Anyone could get the money together would send their children overseas to try to get a foothold there.”

He should know. Mr. Wong aims to return to Australia where he previously studied to pursue a doctoral degree in ecology. If he does, he would add to a brain drain in which 1 million Malaysians left the country as of 2010, according to a World Bank study published a year later, the vast majority of them ethnic Chinese.

“Whenever I read about what happens in Malaysia, I daydream—maybe one day I would visit home and change things,” said Chin Fen Teo, 38, who also lives in the Bay Area. “I wish Malaysia is a country where racial harmony is real, not like the fake posters that are plastered all over to promote tourism,” she said. 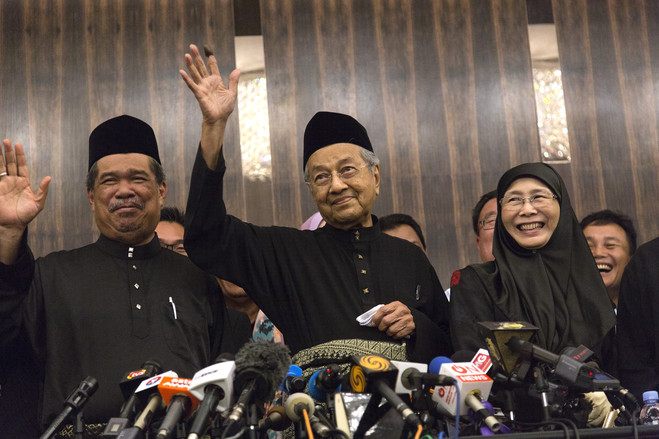 Half of the Chinese Malaysians surveyed last year by researchers from Oxford University said they would leave the country if they could. Malaysia’s Department of Statistics has predicted that the ethnic Chinese population could drop to 20% by 2040, down from 38% at independence and around 23% today, although higher birthrates among Malays is a contributing factor.

Mr. Wong says he would prefer to wait and see how the government tackles the affirmative action system before deciding whether to leave—noting that Mr. Mahathir is still leader of a party that segregates Malay and non-Malay membership.

“As long as his pride stops him from challenging the racial supremacism he engineered decades ago, it will continue drifting around in the Malaysian psyche,” Mr. Wong said. “But if circumstances force him to confront that racism, I suppose I’ll play along.”

Another wild card: Mr. Mahathir, who is 92 years old, has said he plans to hand power in a year or two to former rival Anwar Ibrahim, a longtime advocate of free-market economics, who was released from prison on Wednesday and pardoned for a sodomy conviction he says was politically motivated.

He heads the most avowedly multiracial party in the new coalition. Meanwhile, Mr. Mahathir is focusing his attention on building a case against former Prime Minister Najib Razak, who he accuses of receiving hundreds of millions of dollars from state investment fund 1Malaysia Development Bhd., or 1MDB.

Mr. Najib denies any wrongdoing and has been barred from leaving the country. Police searched Mr. Najib’s residence for several hours overnight Wednesday into Thursday for evidence, taking away several boxes of personal items, one of his lawyers told reporters.

The issue of Malay supremacy will likely linger on in rural or semirural areas, where the idea that Malays serve as the bedrock of the nation and deserve preferential treatment has taken a deep hold, said Ibrahim Suffian, a political analyst at the polling company Merdeka Center

“It’s not going to go away,” he said. “The idea of Malay rights will still be a big part of the political landscape.”

Write to James Hookway at james.hookway@wsj.com

15 thoughts on “Many Chinese Malaysians Abroad are Thinking About Coming Home.”