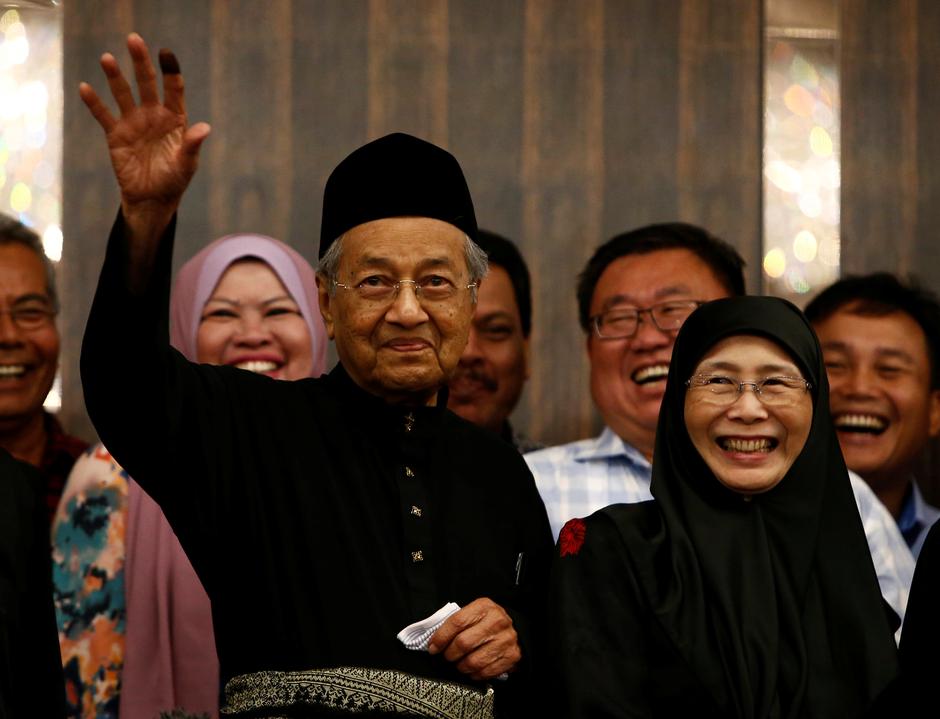 “…Mahathir expressed his regrets and contrition. But that was not why people voted for him. They voted for the alternative offered, not for its salesman. They voted not out of any naive nostalgia for Mahathir but rather out of a yearning for how they remembered themselves in his time in power: a time when (unlike the Najib years from 2009 to 2018) they had found it possible to feel good about being Malaysian.”–Clive Kessler

In the end, Malaysia’s general election result came as a surprise. Outgoing prime minister Najib Razak had, with enormous thoroughness and with the enthusiastic cooperation of the Election Commission, imposed campaigning and voting-day restrictions to ensure only one possible outcome: victory for the country’s ‘permanent government’, centred upon Najib’s United Malays National Organisation (UMNO). Or so it seemed.

Najib Razak, an always wooden and increasingly rattled campaigner, pushed so hard that he drove many troubled voters into the arms of the opposition. Unhappy with Najib’s personal and political style and with the evident excesses of his government — namely its dubious financial machinations and its increasingly authoritarian character — many Malaysians voiced their aggrieved feelings through the ballot.

Yet to vote out Najib and his UMNO grandees, Malaysians had to vote for former long-serving Prime Minister Dr. Mahathir Mohamad, whose own record when it comes to financial mishaps and an authoritarian political manner is far from spotless. The UMNO-Barisan Nasional (BN) campaign dwelt heavily upon those shortcomings. But people regardless voted in great numbers for the opposition coalition that Mahathir led and of which he was the public face.

To counter the doubts encouraged by Najib’s side, Mahathir expressed his regrets and contrition. But that was not why people voted for him. They voted for the alternative offered, not for its salesman. They voted not out of any naive nostalgia for Mahathir but rather out of a yearning for how they remembered themselves in his time in power: a time when (unlike the Najib years from 2009 to 2018) they had found it possible to feel good about being Malaysian.

The restrictive electoral regimen that Najib and his Election Commission imposed served only to push Malaysian voters towards that alternative. Najib’s people did not allow the opposition coalition to offer a common political logo or voting symbol. They also refused Mahathir’s new party (which was part of the opposition coalition) to register itself and its own campaign logo. This meant the entire opposition was pushed to campaign under the one symbol of jailed opposition leader Anwar Ibrahim’s People’s Justice Party. Najib created a situation where an opposition that had never been able to present a united force was now made to appear cohesive. Najib’s forces even insisted that images of Mahathir’s face not be nationally displayed during the campaign period. Official operatives cut his visage out from opposition posters and banners. But by doing so Najib eloquently advertised his desperation and built up Mahathir and the opposition he headed. Najib convinced many Malaysians that he and his political associates, having lost all reason, could no longer be abided.

From the outset of the election results, an official eagerness to preserve calm was evident. As usual the Election Commission declared all the good news for UMNO-BN first and early, and it held back announcing the bad news of the reverses UNMO-BN had suffered until midnight when crowds and energies would be less. The swearing in of the new administration was also delayed until late evening, and a two-day holiday was declared to keep people away from crowded public transport where tempers might fray.

Much remains unresolved. While Mahathir’s Pakatan Harapan coalition team campaigned under one banner, they are a diverse, even motley, collection and face big challenges. Can they form a workable, unified cabinet? Will the new and largely inexperienced ministers respect the boundaries of one another’s portfolio responsibilities? Can they agree upon any clear policy orientations and programs? Will they be able (and allowed) to assume the reins of power in Putrajaya, the federal capital? Will they find the discipline to hold together? Will the civil service and judiciary be amenable to facilitating rule by a Pakatan Harapan government? And will they be allowed to govern in peace?

There will be many, especially among the extremist Malay ethno-sectarian groups and martial arts fellowships who often serve as street-level enforcers for UMNO warlords, who will not be happy with the outcome of these elections. These individuals have both the inclination and capacity to demonstrate their discontent; they have a record of turning to street actions to create civil unrest. If they now choose this path, the new government may have its room for manoeuvre curtailed — if it is not set aside completely to permit a takeover by a non-elected administration, as happened in 1969.

One must remember here that Malaysia’s elections chose not only a federal government but also a dozen state administrations. While nine of these are clearly of an UMNO-BN or Pakatan Harapan hue, the results in three states — including the two principal peninsular states of Perak and Kedah — are on a knife-edge.

After the 2008 elections there was one such knife-edge state (Perak), and the destabilisation and overthrow of its non-UMNO-BN administration provided the opportunity for Najib to oust his prime ministerial predecessor and begin his own doomed prime ministership. The opportunities this time are much greater. Will those with an inclination for creating mayhem control themselves or be controlled? Much rests on these questions and on whether a new, diverse, fragmented and inexperienced administration will find the ability, good sense and strength to handle them.

A nice irony to conclude Najib’s tragic performance on the electoral stage: to monitor the elections and attest to their integrity, Malaysia invited observers from such places as the Maldives, Cambodia, Kyrgyzstan and Azerbaijan. What fine and surprising instruction in the ways of electoral democracy and popular sovereignty — courtesy of Najib, UMNO and its Election Commission — they received.

Clive Kessler is Emeritus Professor of Sociology and Anthropology at the University of New South Wales. He has been studying Malay culture, society, religion and politics since the early 1960s.