Faking Malaysia (or is it, Malusia)

I shouldn’t by rights be writing this. Because after 11 years of contributing a weekly column to the first and still foremost of Malaysia’s pitifully few non-fake newspapers, Malaysiakini, I’ve had to take a break for the sake of my faking sanity.

But with another typically fake Malaysian federal election looming, I just can’t help adding a few more to the 500,000 or so words of calumnious columny I’ve already composed about this nation’s decomposing ‘democracy’.

Or, more accurately, about the ministers, members and supporters of Barisan Nasional (BN), the rotten-to-the-core regime that has been ruling and ruining Malaysia ever since the nation was granted independence by Britain 61 years ago, and changed its name from Malaya to Malaysia.

A moniker that quickly became fake, as the ‘si’ syllable in its new name represented the fact that it supposedly included Singapore.

But, for fear of having to deal with all those pesky extra Chinese led by the then young firebrand Lee Kuan Yew, UMNO, the dominant Malay member of the coalition of race-based parties comprising the the Alliance, as BN was known in those days, soon threw Singapore out and thus made the ‘si’ in Malaysia misleading.

Thus equipped with a fake name, and a constitution falsely deeming Malays to be definitively Muslim as well as providing special privileges for them on the grounds that they were the first inhabitants of the country, a clearly fake claim in light of the existence there of the ‘orang asli’ (original people) long before Malays migrated there from present-day Indonesia and the Philippines, the ruling coalition proceeded to create a fake facsimile of Westminster-style democracy.

Najib Razak and his supporters

Complete with an agung (king) periodically chosen from not just one family of hereditary ‘royal’ parasites as in Britain, but nine of them, headed by the very sultans who had been bribed with cash, Rolls-Royces and other perks by the former colonial powers to keep their subjects abject.

And a coalition, as mentioned above, consisting of parties representing the various races, principally the Malays, Chinese and Indians, leaving little if any room for a proper opposition, plus so privileging the Malays as to inevitably promote racial resentments and tensions.

Or, indeed, outright hostilities, as on May 13, 1969 when there was an outbreak of bloody anti-Chinese rioting allegedly instigated by Tun Abdul Razak, father of current Prime Minister Najib Razak, in what proved to be a successful bid to seize the top job from the nation’s inaugural Prime Minister, Tunku Abdul Rahman.

Ever since then, and especially during the 22-year+ premiership, or, if you prefer, doctatorship of Dr Mahathir Mohamad, Malaysia’s always highly dubious ‘democracy’, or more accurately, as I proposed in a long-ago column, ‘dermocracy’, given that it’s based on race or in other words skin colour, has been totally destroyed by the increasingly incompetent and corrupt UMNO dominated Barisan Nasional regime (aided and abetted by a fawning civil service and an utterly corrupt Police force) and the millions of fakewitted Malaysians (mainly Malays) who have been systematically bullied, bribed, bullshitted and bamboozled into keeping on voting for it. 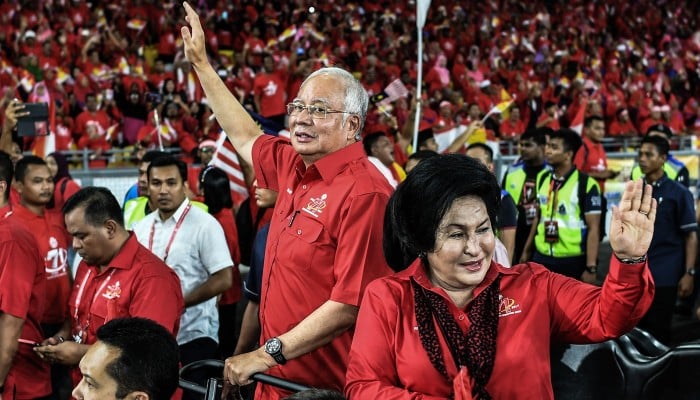 Bullied by threats of a repeat of the May 13, 1969 riots, as in Najib Razak’s oft-expressed determination to hold onto power even at the cost of ‘broken bodies and lost lives’; or of arrest under the Internal Security Act, since replaced by the equally severe Sedition Act; or of dismissal of dissenting civil servants or withdrawal of government scholarships from students suspected of disloyalty to the regime.

To back-up all this bullying, Malaysian voters are bribed with often utterly empty promises of government expenditure on infrastructure and other improvements in their electorates, plus salary-raises, bonuses, extra handouts under the so-called BR1M scheme, and additionally bribed every election day with free meals, bags of rice and sundry other ‘gifts’ including hard cash.

Besides all this bullying and bribery, Malaysians are ceaselessly bombarded with barrages of BN-regime bullshit. Faked-over in every possible way, from being faced with Najib Razak’s fantastic invention of some apparently parallel nation he called ‘1Malaysia’, and under which banner he proceeded to create a whole raft of fake initiatives ranging from falsely ‘economical’ food outlets to the massive global financial fraud and money-laundering scam 1Malaysia Development Berhad (1MDB), to being fed a steady diet of fake ‘news’ by Malaysia’s regime-controlled and thus ruthlessly truthless press, radio, television and outdoor media.

And if all that wasn’t sufficiently bamboozling, BN has progressively, by which of course I mean regressively perverted the Police from a force for public law and order into a farce for the protection of regime flaws and ordure; turned the formerly independent and impartial judiciary into a regime-skewed and indeed screwed travesty of justice; made such a mockery of the so-called Malaysian Anti-Corruption Commission (MACC) that it turns a totally blind eye to regime and crony corruption, and gets away with such faking outrages as the death of witness Teoh Beng Hock in its custody; has so comprehensively corrupted the ‘religious’ authorities (JAWi and JAKIM) as to constitute a disgrace to the very Islam it so faux-piously claims to ‘protect’; and so successfully suborned the Election Commission as to blatantly manipulate electoral boundaries, numbers and even racial mixes in its favour.

All of the above is concealed as far as possible from the Malaysian people, of course, by the BN-controled so-called ‘mainstream media’, newspapers, television, radio and increasing numbers of online sites all keeping silent about BN crimes and corruptions, and loudly proclaiming the regime’s fake propaganda.

@Kini–Let us build something great together- The gallant men and women of Malaysiakini led by Steven Gan and Premesh Chandran.

And now, in an attempt to shut-down the small space for true, independent news and views opened-up by Malaysiakini two decades ago and since expanded by other online portals like Malaysia Today and Sarawak Report, the faking powers that be have passed a so-called ‘The Anti Fake News Act’. Which is in fact an act of bastardry designed to ban the spread of truths that BN deems to be fake, as in contrary to its corrupt and outright criminal interests, by way of penalties of up to six years imprisonment, or fines of up to RM500,000 (about US$120,000), or both.

So, as everything I’ve written in this piece is as far as I know the gospel truth about the BN regime, and thus very likely to be viewed by its self-styled censors as ‘fake news’ under the Act, I won’t be sending it to Malaysiakini for possible publication as a column. 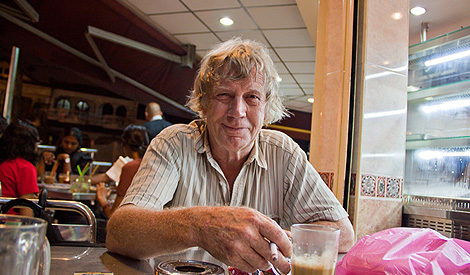 The very last thing I want to do is to risk costing Steven Gan, Premesh Chandran or any other members of the Malaysiakini family, of which I’ve so long been proud to be an honorary and I hope honest and honourable member, a slew of cash or a spell in the slammer, let alone both.

But from down here in Sydney I can relatively safely blog as much true or in other words fake fake news as I like, in the faint hope that it might by roundabout means reach enough of the vast majority of unfake Malaysians to help strengthen them in their resolve to finally force their fake and on-the-take BN government to for once and for all fake off.

4 thoughts on “Faking Malaysia (or is it, Malusia)”