Last week, the Interdisciplinary Research and International Strategy Institute launched its latest publication, Pen’China’an Malaysia: Tergadaikah Tanah Kedaulatan Bangsa? [The Sinicisation of Malaysia: Is Malay sovereignty being mortgaged?, according to one translation].

It turned out to be yet another Malay supremacist gathering masquerading as an academic event.

Interestingly, the book itself opens with a chapter on the influence of the Jewish diaspora, a hint perhaps that there is a parallel between the Jewish diaspora and the Chinese diaspora. Linking two of the Malay world’s favourite bogeymen – Jews and Chinese – strengthens, I suppose, the siege mentality necessary for bigotry to thrive.

Going by press reports, the panelists who were assembled to discuss the book used the opportunity to censure Malaysian Chinese, with speaker after speaker questioning their loyalty and commitment.

PERKASA’s Deputy President, for example, warned that the Chinese diaspora in Southeast Asia posed a threat to the Malays. Noting that “we have seven million Chinese here, four million in Singapore, six to seven million in Thailand,” he went on to argue, rather absurdly, that “the thinking of the Chinese is stereotyped…the Chinese in China and those here all think the same.”

The implications were clear enough: the Chinese diaspora are potential fifth columnists for a resurgent China.

Other speakers seemed to readily agree. “All the Chinese in the world are brothers…so they will fall along with Beijing,” a lecturer from the Islamic Science University was quoted as saying.

ISMA’s Deputy President also questioned the allegiance of Malaysian Chinese while suggesting that their contributions during the Emergency were exaggerated.

The fabricated and racist narrative that Malaysian Chinese cannot be trusted, that they are ungrateful, that they remain an existential threat to the nation, that their contributions to national development are overblown, is now so ingrained among certain segments of our society that it has become an article of faith.

It does not help, of course, that UMNO itself regularly reinforces this narrative as it did recently with its outrageous attacks against Robert Kuok.

I suppose there is some truth to the dictum of Joseph Goebbels (Hitler’s propaganda minister) that, “If you repeat a lie often enough, people will believe it and you will even come to believe it yourself.”

As might be expected, the panelists offered no real evidence to back up their arguments, including the contention that “all Chinese think the same;” they, however, offered plenty of evidence that all bigots are cut from the same cloth.

In the end, one is left with the unmistakable conclusion that all this palaver is simply about Malay supremacy; the Chinese are mere convenient scapegoats.

To be sure, there are legitimate concerns about the growing influence of China in the wake of burgeoning bilateral political, economic and military ties.

Clearly, there is a pressing need for a rational debate about our relations with China to ensure that it serves our national interests above all else and that it is driven by national priorities rather than political expediency or the interests of a few well-connected Malay cronies. 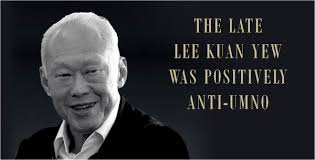 Now we know why: UMNO is a Malay supremacist political party

Like it or not, China is a neighbour, a global power and a major trading partner. Good relations are not an option but a necessity. Building a national consensus on the issue is, therefore, essential if we are to develop stable and mutually-beneficial relations with China.

And integral to this effort is the need for a clear distinction between China and Malaysian Chinese. China is a foreign country, we may agree or disagree with its policies; Malaysian Chinese are fellow “sons and daughters of Malaysia” (to quote from  Prime Minister Najib’s Lunar New Year message) and should never be treated with suspicion or contempt simply by virtue of their ethnicity.

In any case, it is ironic that a Malay supremacist political party (UMNO) spearheads the push for closer strategic ties with China and the loyalty of Malaysian Chinese are questioned. Well-connected cronies get the contracts and local Chinese get the blame.

UMNO and its fellow travelers are clearly running with the hares and hunting with the hounds, extolling the benefits of good relations with China (and profiting from it) while exploiting the insecurity it generates among unthinking followers.

Our nation might be better served if all those who are zealous for its honour look a little closer to home – at the theft of public funds, the abuse of power, the betrayal of trust, the violation of our constitution – instead of focusing on superficial and self-serving definitions of loyalty that divide and diminish our nation and unjustifiably alienate so much of our citizenry.