Malaysia: Is Emergency Rule Possible in 2018 ?

“There comes an hour when protest no longer suffices; after philosophy there must be action; the strong hand finishes what the idea has sketched.”
― Victor Hugo, ‘Les Misérables’

COMMENT | You have to give credit to the old maverick, Dr Mahathir Mohamad, the Pakatan Harapan designate for the top job if the coalition comes into power. Not only is he comfortable slaying sacred Malay cows, he has no problems baiting the Najib regime as he does when he extols the virtues of street protest if the Prime Minister dares to declare an emergency in lieu of elections.

Would Najib declare an emergency? This is doubtful. The regime may be in a precarious position, but the UMNO regime still has the tools to successfully ensure electoral success and with the opposition in disarray, the longer it takes to hold an election, the better the chances for the Umno establishment to narcotise a weary electorate.

If the opposition was a cohesive force, then time would not be on Najib’s side but as it is, the longer he holds off, the more the opposition embroils itself in stupid “friendly fire” fiascos that only serves the Umno hegemon and makes the fence-sitting voters more convinced that they should vote for stability. 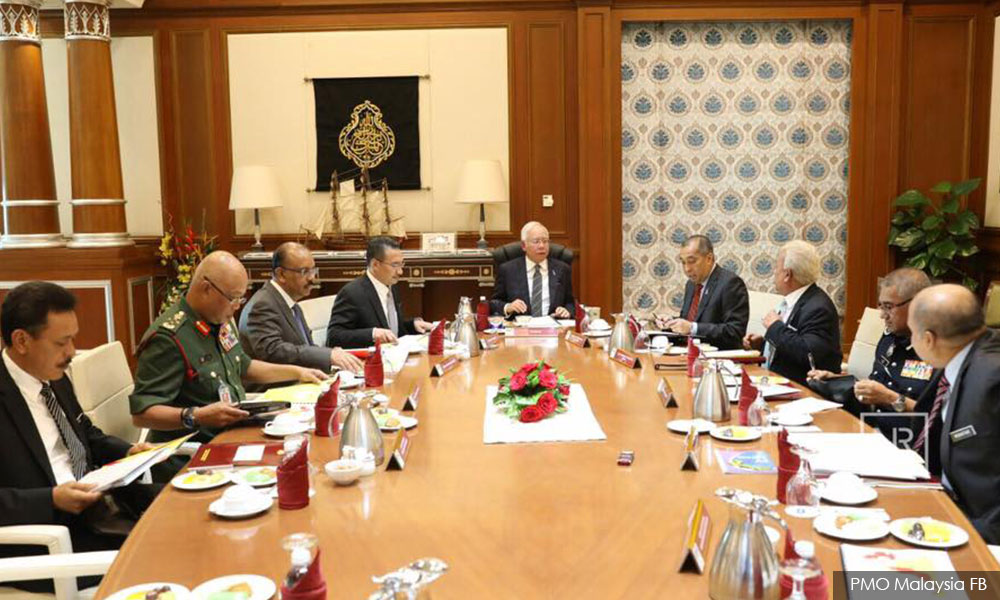 But let us say for whatever reason, Najib does decide to use the emergency option. He really does not need the consent of the Agong to play that card. The National Security Council (NSC) law gives him the power to declare certain areas as security risk (and people should understand that “security” in this instance is widely defined) and he could stall an election for years, if need be.

If memory serves, the Inspector-General of Police and the Chief of Defence Forces have a seat at the council. This way, in theory at least, he could bypass the consent of the Agong is within the confines of the law, and he has the heads of the various security apparatus at his side. Scary stuff.

I have written about this law numerous times and people should really familiarise themselves with what it could have in store for Malaysians.

Or you could read the Cliffs Notes version with the scary highlights, courtesy of Amnesty International – “One provision, Section 18, allows the Prime Minister to arbitrarily designate any area in the country a ‘security area’, if he deems it a potential source of ‘harm’. ‘There is good reason to fear that the Act will be yet another tool in the hands of the government to crack down on peaceful protests under the guise of national security,’ said Josef Benedict.

“The special status given to ‘security areas’ could worsen Malaysia’s track record of custodial deaths and police brutality. Under Section 35, magistrates and coroners will no longer have to carry out inquests into deaths resulting from operations mounted by security forces within these areas.

Rosmah Mansor–Chief of Najib’s Defence Forces–Greed and Worship of Power will destroy her in the end.

Of course, there are claims made that the Harapan leadership has plans if the Najib regime uses racial-religious tensions to suspend elections, and it is the duty of Malaysians to support (Harapan) politicians. And by support, I guess it means that normally timid Malaysians will have to go on the streets. Well, let us see how this plays out.

The DAP is demonised as anti-Malay and anti-Islam, so by encouraging its supporters to go on the streets, the leadership, not to mention the entire Chinese community, would be labelled by the government as subversive and part of the reason for the security crackdown. This, of course, would necessitate the entire (probably) DAP leadership being carted away in Black Marias.

PAS, if it is not firmly in bed with UMNO, will probably say that street protest is not the “proper” way to engage with UMNO and probably make some sort of deal with the Umno hegemon in the name of Malay/Muslim solidarity.

And let us not forget Sabah and Sarawak. Who knows how things will play out there since the populations of both states have a deep mistrust of peninsular politics and would probably sit this one out. 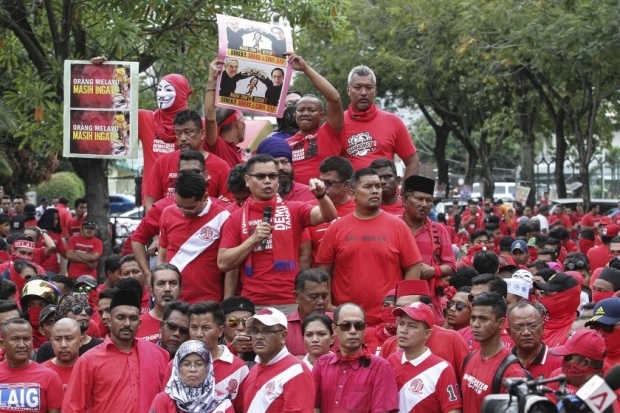 So, this leaves a spontaneous outpouring of support fueled by social media against the ruling UMNO hegemon mainly in the urban areas. Urban areas are in many ways easier to control, and it does contribute to the narrative that people in these areas are purposely stirring up trouble for the country, and want to usurp the position of a particular race and religion.

Young people could possibly go out into the streets and wage a protest against the UMNO establishment, but does anyone really see this happening in Malaysia? If young people were truly engaged with the system and let’s face facts, if young people were brought up in a culture where protest and political involvement were encouraged, then maybe this could happen.

However, for the moment the hegemon provides a comfortable environment for the breeding of apathy. And let us not forget that many young people are not voting, and if they are not voting, which is the easiest thing in the world to do, what makes anyone think that they would brave the state security apparatus and demand that the Najib regime hold elections just so they could exercise their right not to vote?

Besides, nobody wants another May 13, certainly not the non-Malays. This would be the narrative of course. No matter what the hegemon engineers, it will be about race and religion.

Then, of course, there is the other side of the coin. Calling for an emergency or engineering a situation in which areas are declared security risks, is a move that demands cojones. It is a move in which the state security apparatus has to essentially wage a war against their own. Tyranny is a bloody business. Can the regime expect that the state security apparatus, and by this, I mean the foot soldiers, would actually turn their guns against their own?

During my military career and after, I have had the unfortunate life experience of meeting those men who do the bloody work for tyrants. Men and women who have been in deaths squad and other paramilitary outfits used to suppress dissent. Men who have turned on their own for the benefice provided by tyrants.

I do not see this in Malaysia. Not the banal evil of other kleptocratic countries. Let us not go there. If the Najib regime does call some kind of emergency using the tools available to him, I wonder if Malaysians – and by this I mean everyone from protesters, the security apparatus and politicians – would be able to turn on each other.

As someone who has been to nearly every one of these protests of diminishing returns, I know a few old timers – patriots even – who would have no problem being cannon fodder for the “cause.” After all, we started this problem, so we may as well contribute in finishing it or it finishes us.

But large-scale protests as we have seen in other countries, I am sceptical, not when the opposition is in disarray and young people are marginalised from the mainstream oppositional process. I am more inclined to find it useful to look at other Muslim-majority countries rather than countries closer to home.

Because of our political system, Malaysia is due a reckoning. I do not think that the opposition at this time would be the harbinger of the shape of things to come, but I do know that when it does come, everyone will be touched.

9 thoughts on “Malaysia: Is Emergency Rule Possible in 2018 in lieu of Elections?”