The Donald Trump wrecking ball has now completed its swath across Asia, from Saudi Arabia to Japan. It began on May 20 when he chose Riyadh, the capital of the medieval kingdom and ground zero of Muslim extremism, as his first overseas visit after taking office and has ended with his now-concluded 12 day swing and his embrace of the Philippines’ murderous president Rodrigo Duterte. He took time out to outrage the US’s intelligence community by his fawning embrace of former KGB Colonel Vladimir Putin, who, wide-eyed, told Trump he had nothing to do with sabotaging the US election that brought Trump to power.

Thus far the results have been more dangerous in West Asia, where the young Saudi de facto ruler Prince Mohamed bin Salman has since embarked on confrontations with Iran in Yemen and now Lebanon, actions which appear to please few other than Israeli Prime Minister Benyamin Netanyahu’s expansionist government.

In east Asia on the other hand, the reaction to Trump has been to gasp at his gaffes and empty rhetoric and try to carry on as though he did not exist. So far the only damage has been to the US itself as it sees the policies of 70 years which have so benefited trade and prosperity in the US itself as well as much of Asia viewed as contrary to US interests. For Trump it appears that the only free trade he wants is ability to plant Trump Towers everywhere from Riyadh to Bali to Manila via Moscow.

The record of the President‘s Asian tour was indeed remarkable, leaving a string of Asian leaders agog at his superficiality. Shinzo Abe was suitably flattering and took him golfing. But the highlight of the visit was a meal which proved that the Donald had little taste for his host nation’s acclaimed foods but needed a large cheeseburger of US-produced beef and cheese to keep him going while Abe looked on, bemused. On trade issues, which he says are so important, nothing significant transpired, with the President focusing on the art of the deal across Asia rather than the structural reforms that the trade regime needs.

China did even better in flattering him with a display of pomp which would give credit to an ancient empire, with Xi Jinping as emperor – an emperor whose growing power is sending tremors throughout the rest of Asia.  But again Trump came home empty-handed on trade.  Promises of US$250 billion of imports to China may well be built on sand. Commercial sales announced totalled US$65 million, many involving goods that Chinese companies buy routinely. Others were merely memorandums of understanding.

A Chinese decision to ease foreign access to financial markets appears to have had no direct connection to the visit. Trump even undercut his own cause by suggesting that China’s huge trade surplus with the US was the fault of the system, not China itself, saying “I don’t blame China. Who can blame a country for being able to take advantage of another country for the benefit of its citizens? I give China great credit.”

Instead, Trump blamed past American presidents. By definition this undermined demands of US businessmen for fairer treatment by China – treatment of the type which was the norm in most of its major trade partners. Legitimate US complaints could be ignored. 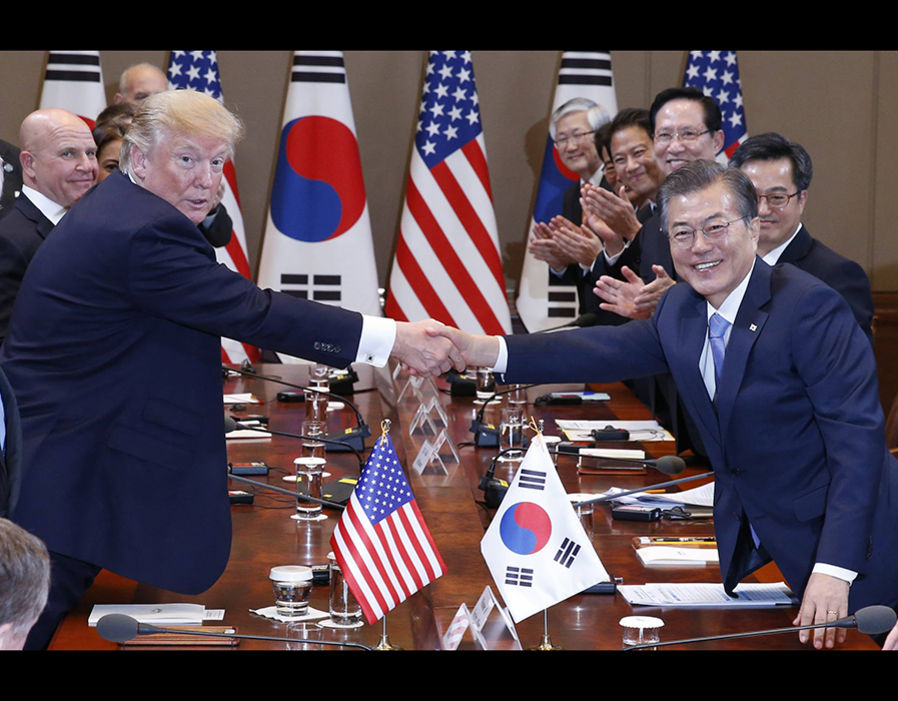 His South Korea visit demonstrated just how much his violent rhetoric against North Korea, not to mention his attacks on trade pacts, had already so damaged relations that Seoul succumbed to Chinese economic and diplomatic pressures and agreed to limiting deployment of THAAD missiles.

On to Vietnam and, the APEC meeting in Da Nang showed just how far Trump was out of step with the attempts of the other nations on either side of the Pacific to forge closer economic links and reduce trade barriers. Meanwhile the remaining nine members of the Trans-Pacific Partnership, following withdrawal of the US, humiliated Trump while he was in Asia by announcing the revival of the plan, albeit under a slightly altered name.

If that wasn’t a huge slap in the face for the US from its major Asian allies, more derision was to follow.  Trump proclaimed himself a potential mediator in South China Sea disputes. Reactions ranged from open-mouthed amazement to guffaws of laughter. The only person who seemed to take it seriously was the Philippines’ neophyte foreign minister Alan Peter Cayetano who was quoted saying “We welcome that offer.”

But at least for Trump he was now headed for the one country in the world where, according to recent surveys, he enjoys more positive than negative views. That certainly fits well in a nation which still gives high marks to President Duterte despite, or because of, a campaign of extrajudicial killings of thousands of supposed, mostly poor, drug users – or, too often – people who weren’t drug users at all, but infants as young as 3 who were murdered mistakenly by police.

Trump remained silent on that topic but meanwhile was able to share with Duterte their mutual disdain for President Obama.  This was certainly no way to win friends and influence people in the rest of Asia which has relatively very fond memories of the thoughtful and dignified former president.

Nor did Trump’s pals-act with Duterte make any dent in Duterte’s preference for Chinese money over asserting the rights in the sea accorded by the Permanent Court of Arbitration.

The one plus, at least in some quarters, of the visit was Trump’s reference to the Indo-Pacific rather than Asia Pacific, bringing India into the regional equation. This was not in fact new. The phrase had been used by Obama and it accords with history in so far as Indian cultural and trade influence was long bigger than China’s in much of Southeast Asia.

But that for now is a sideshow as apparent battle lines are drawn between an east Asian focus on open trade and a Trumpian desire to tear up multilateral pacts in favor of bilateral deals. That would spell the death of US influence in the region. Most likely it will not happen because US business, military and bureaucracy are all more concerned with building US influence to counter China than retreating behind tariff walls. But meanwhile China is tempted to gloat and smaller Asian countries are reluctantly trimming their policies in response to US trade threats and general incoherence.

10 thoughts on “An American Bull in Asia’s China Shop”