India’s Responses to the Complex Rohingya Crisis in Myanmar

The recent massive refugee outflow of Rohingya Muslims from Myanmar into Bangladesh has created a humanitarian crisis and international outrage. United Nations human rights chief Zeid Ra’ad al-Hussein, accused Myanmar of carrying out “a textbook example of ethnic cleansing” against the Rohingya. Myanmar rejects the accusation,  saying its military was engaged in counter-insurgency operations against Rohingya militants  who conducted the August 25 attack by the Rohingya militant group ARSA (Arakan Rohingya Salvation Army) on police and military posts, resulting in the death of about 70 people. The provocation certainly led to the intensification of the crisis, which originates in a conflict dating back to the 19th century.

The Rohingya are a Muslim minority ethnically related to those living in neighboring Bangladesh’s Chittagong District. They form 90 percent of the one million people living in the north of Rakhine State in Myanmar, where ethnic Rakhines – primarily Buddhist – are the majority of the state’s three million residents. Some Rohingya have been in Myanmar for centuries, while others arrived in recent decades. Burmese authorities consider the Rohingya – whether recent arrivals or long-time residents – undocumented immigrants and a source of instability in the country, and not as citizens or as an ethnic group. Burmese authorities are loathe to recognize the Rohingyas as a separate ethnic group which would automatically entitle them for a separate state, as Burmese states are formed on the basis of ethnicity. Moreover, given the concentration of the Rohingyas next to Bangladesh, where Islam is becoming increasingly radical, Myanmar – being a Buddhist majority country – will never accept them as an ethnic entity. If the Rohingyas self-identify as just a religious group, they could enjoy citizenship rights like other Muslims in the rest of Myanmar. Former UN Secretary General Kofi Annan’s recommendations in August are similar, and in September Myanmar leader Suu Kyi stated that her government was willing to take back the refugees after verification. Under the 1982 citizenship law, the Myanmar government recognized only about 40,000 Rohingyas as its citizens. 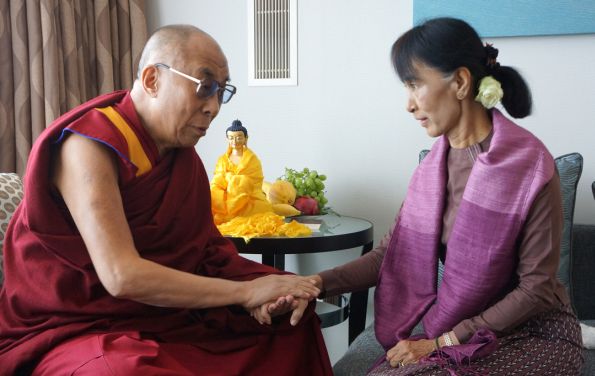 The Dalai Lama has urged fellow Nobel Peace laureate Aung San Suu Kyi, a main opposition leader in Myanmar, to do more to help protect the persecuted Muslim Rohingya minority in her country amid a worsening migration crisis.
While the response of the Myanmar military was brutal and disproportionate to the attack by the insurgents, the international community’s response, particularly the Western and Muslim countries and their intense criticisms of Aung San Suu Kyi for her failure to stand up against the army crackdown and to protect the human rights of the Rohingyas, is also disproportionate. Critics fail to understand the military-civilian relations and other complexities of Myanmar politics where issues like ethnicity, history, and cultural identity are key ingredients of legitimacy. By condemning Suu Kyi, her critics have inadvertently not only provided a shield to the Army chief, Min Aung Hlaing, from responsibility for perpetrating atrocities against the Rohingyas, but also practically weakened her position vis-à-vis the powerful military of the country. While Suu Kyi’s popularity is still quite high, the political base of her party, the National League for Democracy (NLD), is quite fragile. If she tries to take a critical attitude on the Rohingyas, the military can easily align with the Buddhist nationalists, who have nothing but scorn and hatred for the Rohingyas, and undermine her power. That would be a blow to the limited progress Myanmar has made in democratization under difficult constitutional constraints.
India’s response to the Rohingya issue is calibrated on an understanding of the history and complexities of Myanmar politics of ethnicity and legitimacy. New Delhi has to balance between its security concerns and moralism on humanitarian issues. Initially, it was conditioned predominantly by its security concerns. India, through its consulate in Rakhine’s capital Sittwe, has long been keeping tabs on the influence of foreign Islamist radical groups on the Rohingyas, and warned Myanmar of possible attacks by the ARSA prior to the August incident. In February, India had also warned of an increased presence of Pakistan-based and funded terror organizations like Lashkar-e-Toiba, seeking to exploit Rohingya resentments. Also the influence of Bangladeshi radical organizations such as the Jamaat-e- Islami initially, and then its youth wing, the Islamic Chatra Shabir, within the refugee camps is causing alarm in both Dhaka and New Delhi. Even organizations such as the Rohingya Students Organisation (RSO) were known to have links with “like-minded” groups such as the Harkat ul-Jihad al-Islami (HuJI) along with Hizb-e- Islami of Afghanistan and the Hizbul Mujahideen. On India’s decision to deport 40,000 Rohingya refugees, the government, in its affidavit to the Supreme Court, said that some of the Rohingyas with militant background were found to be very active in Jammu, Delhi, Hyderabad, and Mewat. Prime Minister Narendra Modi during his visit to Myanmar in September described India and Myanmar as “partners” in their concern over “extremist violence” in Rakhine State.

“Myanmar – being a Buddhist majority country – will never accept them as an ethnic entity. If the Rohingyas self-identify as just a religious group, they could enjoy citizenship rights like other Muslims in the rest of Myanmar.”

Even though the issue of terrorism dominates the security narrative on India’s approach to the Rohingya issue, India’s Act East Policy is linked to land connections with Myanmar. This policy, has two major planks – economic development in northeast India and balancing China’s influence. China has not only declared its open support for Myanmar’s “anti-terror” operations, but also expanded its economic and political influence in the country. In fact, it was the heavy-handed criticism by the West and call for sanctions for atrocities against Rohingyas that forced Myanmar again to rely on Beijing to offset any major backlash in the international fora. In such a situation, any open criticism of Myanmar could undermine India’s influence. India is also dependent on Myanmar military’s cooperation to deal with the insurgent groups in the Northeast, who in the past found sanctuary on the Myanmar side of the border. Geopolitics also drive India to take a soft approach to Myanmar’s crackdown on the Rohingyas, fearing the country might otherwise again grant safe havens to North-East insurgents.  China has set up a gas and oil pipeline running from the Rakhine port of Kyaukphyu to Kunming. Beijing has backed Myanmar’s violent crackdown, hoping it will bring security to a region important for China’s energy security. India, for its part, is working on the Kaladan transport project, linking Sittwe to Kolkata. New Delhi believes the best way to reduce tension in Rakhine is through such development efforts.

As the refugee and humanitarian crisis unfolded in the month of September, with Bangladesh bearing the economic and physical burden of more than 600,000 refugees,  Dhaka’s diplomatic overdrive made New Delhi modify its position on the Rohingya issue and acknowledge that there is now a refugee crisis. India also urged the Myanmar government to exercise “restraint and maturity” and stressed the need to focus on the “welfare of the civilian population.” Even while India’s government exercises caution and restraint in its approach to the Rohingya issue, civil society and human rights groups are quite critical of Myanmar’s handling of the Rohinyga issue, and wants New Delhi to take an active role in seeing the refugees back to their homeland with peace and dignity.

Dr. Baladas Ghoshal is  Secretary General of the Society for Indian Ocean Studies and Former Professor and Chair in Southeast Asian Studies at Jawaharlal Nehru University. He can be contacted at profbala7228@gmail.com.
The East-West Center promotes better relations and understanding among the people and nations of the United States, Asia, and the Pacific through cooperative study, research, and dialogue.
Established by the US Congress in 1960, the Center serves as a resource for information and analysis on critical issues of common concern, bringing people together to exchange views, build expertise, and develop policy options.

The Asia Pacific Bulletin (APB) series is produced by the East-West Center in Washington.

The views expressed in this publication are those of the authors and do not necessarily reflect the policy or position of the East-West Center or any organization with which the author is affiliated.