The careers of certain cultural figures follow a predictable arc: first young and brazen, then oddly revered, then overly familiar, and then, at last, obsolete. Frank Harris had a career with a shape something like this: a cowboy and a lawyer before becoming the leading London newspaper editor of the eighteen-nineties, he then became known only as the author of a scandalous, multi-volume sexual memoir, ending up merely notorious. Hugh Hefner, the publisher of Playboy, who died on Wednesday, at the age of ninety-one, at the Playboy Mansion, in California, was another such figure. It is as hard now to recapture the period during the nineteen-sixties and seventies when Hefner actually seemed, if not exactly a cultural presence to be reckoned with, then at least a publishing magnate to be recognized, as it would be to return his magazine, Playboy, to the distinctive place, high up on the newsstand, that it once occupied. At one point, George Will could compare Hefner to Fitzgerald’s Jay Gatsby—not an entirely bad notion, given that the essential vulgarity of Gatsby’s taste, obvious to his creator, has been eclipsed by the retrospective glamour that has been placed on the book. But something like the opposite has taken place with Hefner. There was a time when his excursions into the Playboy philosophy, which was not quite as ridiculous a document as its title makes it sound, were, though never taken seriously, at least seen as significant. Now, they seem not merely quaint but predatory.

What Hefner did was, in one way, as old as sex itself: he took the heterosexual male gaze and commodified it. He took the universal straight-male appetite for pictures of semi-naked women and found a way to feed it that became acceptable enough to attract conventional advertisers. But his real touch of opportunistic American genius was the reverse spin that he pioneered: he took commodities and attached them to the male gaze. He took all the goodies of mid-century American life—the hi-fis and the stereo LPs and the nascent color TVs and the Flokati rugs—and made them part of a plausible seeming whole. The “Playboy man” of Hefner’s imagination was as much a creature of his living room as of his lusts. Desire became inseparable from decoration, carnality from consumerism. Only the bachelor with the right Breuer chair could hope to have an active bedroom. Hefner, as someone once said, made the indoors to the mid-twentieth century what the outdoors had been to the nineteenth—the place where you showed yourself worthy of the idea of a man. 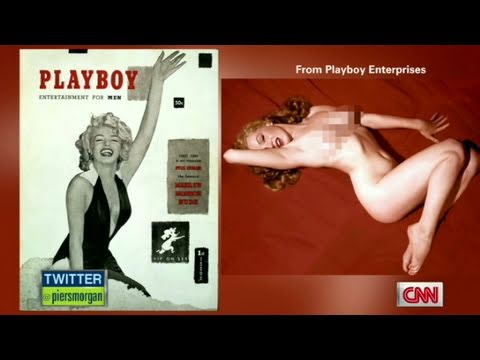 The feminist critique of Playboy came early, sharp, and loud. It was certainly political, and it was also correct. However much Miss July might be asked to list her intellectual attributes alongside her measurements, it was as a measurement alone that she was being displayed. The pictorials came accompanied by a rhetoric of female empowerment, or at least sexual empowerment, but it was in every way a measured empowerment. Proposing Hefner’s ideal as the most desirable body type was not just repellant but in many ways noxious. The anxious adolescent coyness that the enterprise never escaped—in part because anxious adolescent coyness was Hefner’s true signature emotion, a silk dressing gown and a pipe being exactly an anxious adolescent’s idea of sophistication—was essentially anti-sex, replacing the real thing with a synthetic substitute.

Let it be said that Hefner hired and helped many women. Alice K. Turner was the magazine’s fiction editor for two decades. (Margaret Atwood, Ursula K. Le Guin, and Joyce Carol Oates all wrote for Playboy.) Hefner handed over the reins of the operation to his daughter, Christie, who for a while was one of the more prominent women C.E.O.s in the country and a major supporter of progressive causes. And, of course, many fine and important things were published in the magazine. The fiction tended to be second-rate work by first-rate names, but the interviews that Hefner published were often major events: Miles Davis, Malcolm X, Vladimir Nabokov, Ayn Rand, Martin Luther King, Jr., Fidel Castro, Joan Baez, Bob Dylan, George McGovern, Jimmy Carter, and the very last testament of John Lennon.

The case could even be made—Hefner himself certainly wanted to make it—that, by sponsoring a broadly libertarian view of culture, Hefner and Playboy played a pivotal role in bringing an end to imprisoning ideas of gentility. In one of those carom shots of which cultural history is full, by announcing feminine sexuality as a good thing for the girl next door—however comically self-interested the announcer’s motive—Hefner may indeed have played an unintentional role in the assertion of female sexuality and autonomy. After all, he reminded many women of what they didn’t like about the way they were portrayed, and that they might have something to say about it.

But, in the end, the American fable his life most resembled was not “Gatsby” but “Citizen Kane.” By the time Hefner died, seemingly as isolated in his mansion as Kane was in his Xanadu, his empire had been vastly reduced—by both time and fashion. Even before the Internet levelled the world of libidinal gazing, the titillation that Hefner’s imagery evoked had already mostly vanished. The ironic triumph was that the Internet, which achieved Hefner’s dream of instantly accessible and publicly acceptable erotica, undid the old man. Punching a few keys on a keyboard could provide the entire range of human desire and, as pornography took on a truly democratic character, it nearly bankrupted many of its tycoons in the bargain.

One thought on “Hugh Hefner, Playboy, and the American Male”