The spotlight shifts from Germany to France

WHO leads Europe? At the start of this year, the answer was obvious. Angela Merkel was trundling unstoppably towards a fourth election win, while Britain was out, Italy down and stagnating France gripped by the fear that Marine Le Pen might become the Gallic Donald Trump.

This week, it all looks very different. Mrs Merkel won her election on September 24th, but with such a reduced tally of votes and seats that she is a diminished figure. Germany faces months of tricky three-way coalition talks. Some 6m voters backed a xenophobic right-wing party, many of them in protest at Mrs Merkel’s refugee policies. Having had no seats, Alternative for Germany, a disruptive and polarising force, is now the Bundestag’s third largest party.

Yet west of the Rhine, with a parliament dominated by his own new-minted and devoted party, France’s President Emmanuel Macron is bursting with ambition . This week he used a speech about the European Union to stake his claim to the limelight. Whether Mr Macron can restore France to centre-stage in the EU after a decade in the chorus depends not just on his plans for Europe, but also on his success at home, reforming a country long seen as unreformable. 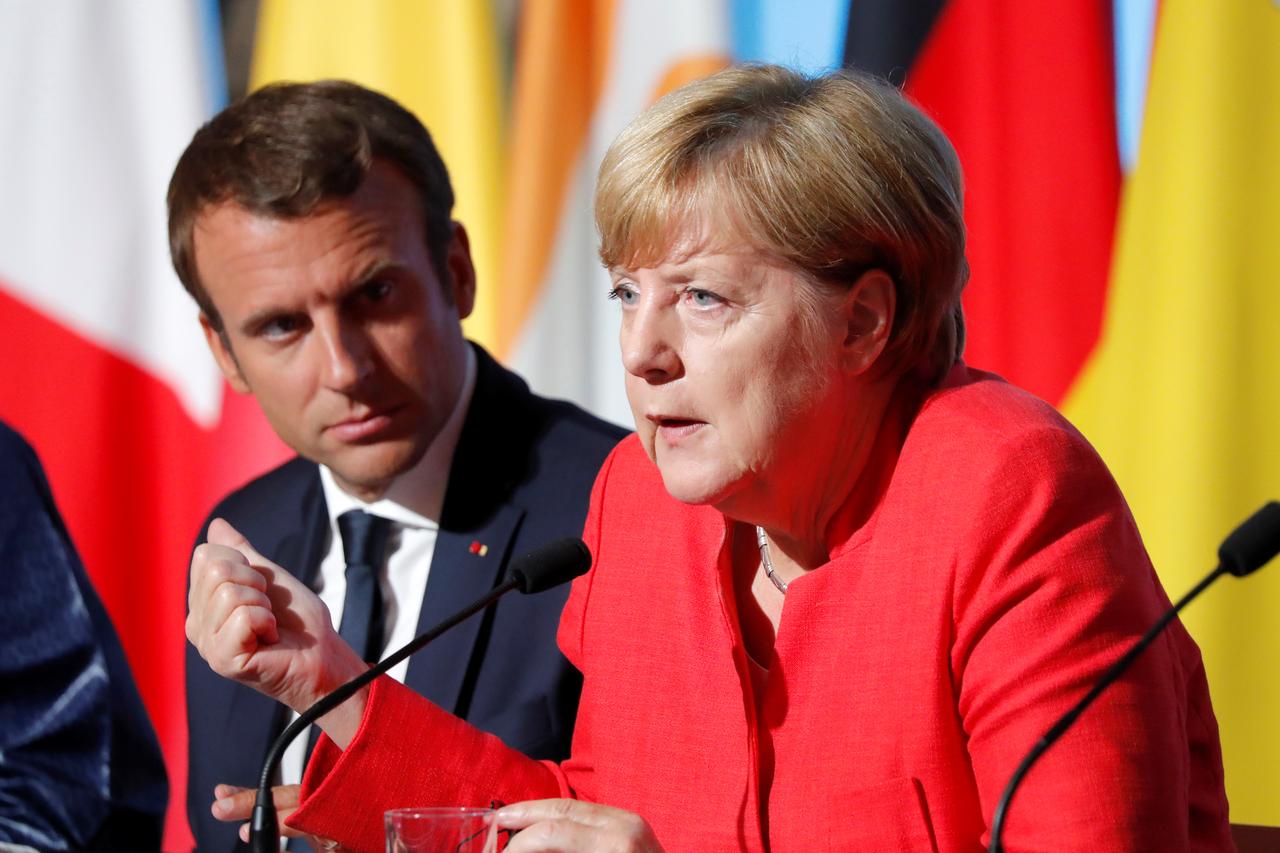 Start with Europe. This week’s speech was brimming over with ideas, including a shared military budget and an agency for “radical innovation”, as well as the desire to strengthen the euro zone. At one level, Mr Macron’s bid for the role of intellectual innovator in Europe fits a long French tradition. Moreover, elements of his speech—a new carbon-tax on the EU’s frontiers, a proposal to tax foreign tech firms where they make money rather than where they are registered, a crusade against “social dumping” with harmonised corporate tax rates—were in keeping with long-standing French attempts to stop member states competing “disloyally” against each other.

Yet Mr Macron has a more subtle and radical goal than old-style dirigisme; as if to prove it, he agreed this week that Alstom, which makes high-speed trains, could drift from state influence by merging with its private-sector German rival. His aim is to see off populism by striking a balance between providing job security for citizens, on the one hand, and encouraging them to embrace innovation, which many fear will cost them their jobs, on the other (see Charlemagne). In his speech Mr Macron also made the case for digital disruption and the completion of the digital single market. Euro-zone reform would make Europe less vulnerable to the next financial crisis.

The merit of these ideas depends on whether they lead to a more enterprising, open and confident Europe or to a protectionist fortress. But they may not be tried out at all unless Mr Macron can make a success of his policies at home. For, if France remains a threat to the EU’s economic stability rather than a source of its strength, its president can never be more than a bit player next to Germany’s chancellor.

Mr Macron’s domestic policy might seem to have made a poor start. He has grabbed headlines thanks to the size of his make-up bill, the collapse of his popularity and the whiff of arrogance about his “Jupiterian” approach to power. Predictably, the grouchy French are already contesting the legitimacy of the plans they elected Mr Macron to carry out. Reform in France, it seems, follows a pattern. The street objects; the government backs down; immobilisme sets in.

Yet take a closer look, and Mr Macron may be about to break the pattern. Something extraordinary, if little-noticed, took place this summer. While most of the French were on the beach, Mr Macron negotiated and agreed with unions a far-reaching, liberalising labour reform which he signed into law on September 22nd—all with minimal fuss. Neither France’s militant unions, nor its fiery far left, have so far drawn the mass support they had hoped for onto the streets. Fully 59% of the French say that they back labour reform. More protests will follow. Harder battles, over pensions, taxation, public spending and education, lie ahead. Mr Macron needs to keep his nerve, but, astonishingly, he has already passed his first big test.

In many ways, the 39-year-old Mr Macron is not yet well understood. Behind the haughty exterior, a leader is emerging who seems to be at once brave, disciplined and thoughtful. Brave, because labour reforms, as Germany and Spain know, take time to translate into job creation, and usually hand political rewards to the successors of those who do the thankless work of getting them through. Disciplined, because he laid out clearly before his election what he planned to do, and has stuck to his word. The unions were fully consulted, and two of the three biggest accepted the reform. Compare that with his predecessor, François Hollande, who tried reform by stealth and encountered only accusations of bad faith. Last, thoughtful: Mr Macron does not approach policy as an à la carte menu. He has grasped how digital technology is dislocating the world of work. His governing philosophy is to adapt France’s outdated system of rules and protections accordingly.

Over the past few years, an enfeebled France has been a chronically weak partner for Germany, pushing Mrs Merkel into a solo role that she neither sought nor relished. If he is to change that dynamic, Mr Macron needs to move swiftly to match his labour law with an overhaul of France’s inefficient training budget, increase the number of apprenticeships and renovate the state’s sleepy employment services. He also needs to explain with a less contemptuous tone why his plans for tax cuts, including to France’s wealth tax and corporate tax, are not designed simply to benefit business and the better-off. In Europe he needs to reassure the northern, more open economies that he is not trying to put up walls.

Of course, Mr Macron’s first steps in the spotlight may falter. The odds on any leader reforming France are never high. He will struggle to convince Germany to embrace his vision of euro-zone reform. But, if this year has shown anything, it is that it is a mistake to bet against the formidable Mr Macron.

One thought on “From Merkel to Macron–The Future of Europe”