A couple of semesters ago, sick of inflicting pain on my brain for what seemed diminishing gain, I took a break from my Sydney University course with little or no intention of ever resuming it.

As I recall thinking at the time, I was too old and tired to ever hope to achieve more than the ‘little learning’ that Alexander Pope proverbially deplored as a ‘dangerous thing’, let alone to aspire to the paradoxical Socratic ideal of knowing so much as to know only that I knew nothing.

But at least, or so I consoled myself, the part of my degree that I’d completed had equipped me with enough skepticism to last me the rest of my life.

Every successive unit I’d done of Gender Studies had even further confirmed my initial suspicion that, however productively thought-provoking this course may have been in many ways, it was far too polemical if not outright propagandist to be considered properly or in other words open-mindedly academic.

And my admittedly limited expeditions into Philosophy had been similarly disconcerting, revealing as they did that, as Descartes (1596-1620) both declared and in my humble opinion amply demonstrated in his own work, ‘there is nothing so strange or so unbelievable that it has not been said by one philosopher or another’.

Even Plato, the philosopher that many consider the greatest of them all, at least in the Western tradition, deviated at times from truth-seeking philosophy into the false sophistry he otherwise claimed to deplore and despise, as in his advocacy of the so-called ‘Noble Lie’ that people were born with divinely-determined roles in society, and that ‘justice’ decreed that they remain in these roles under the rule of a class of ‘Philosopher Kings’ in his purportedly utopian ‘Republic’.

And Plato’s almost equally-esteemed pupil Aristotle, famously, or rather infamously, made the outrageous and utterly unsupported statement in his otherwise largely admirable Nicomachean Ethics that Greeks are superior to non-Greeks, and men superior to women and slaves.

For all their faults, however, Plato, Aristotle and most other philosophers both Western and Eastern have been rank amateurs when it comes to inventing lies, be they ‘noble’, ignoble or downright evil, compared with power-freaks with not a thought in their heads but to seize and hold power over as many of the ‘common’ people as possible.

And thus it behoves all of us, Greeks, non-Greeks, men and women alike, to refuse to be treated by such misleaders as slaves, or else a ‘silent majority’ of passive ‘citizens’, but as highly vocal and active critizens devoted to exposing and rejecting their lies.

A thought that leads me to my rationale for deciding to subject myself to yet another dose of academia, the lure of a Philosophy unit at Sydney University, code number PHIL2642, called Critical Thinking.

This, according to its description in the Arts Faculty Handbook, is ‘an introduction to critical thinking and analysis of the argument. By examining arguments drawn from diverse sources, including journalism, advertising, science, medicine, history, economics, and politics, we will learn how to distinguish good from bad arguments, and how to construct rationally persuasive arguments of our own.

Along the way, we will grapple with skepticism, conspiracy theories, and pseudoscience. The reasoning skills imparted by this unit make it invaluable not only for philosophy students but for every student at the university.’

And also, as I said earlier, for every citizen who prefers ‘critizenship’ to enslavement.

Let me not get too carried away with my expectations for this Critical Thinking unit, however. One fundamental problem with it that you were doubtless way ahead of me in spotting, is that, like most philosophy, it focuses on ‘rationally’ rather than emotionally persuasive arguments.

As if David Hume (1711-1776) hadn’t centuries ago made it clear, as if it wasn’t always so, that ‘reason is the slave of the passions’. A truth that must be grimly self-evident to anyone who has imagined, let alone actually tried, rationally arguing against the passionately-expressed but patently false emotings of US President Donald Trump, Malaysian Prime Minister Najib Abdul Razak or any of his mendacious paid mouthpieces, or the ravings of any of the world’s countless other misleaders.

And not only are these peoples’ statements a pack of rationally-unarguable irrational lies, but many of the individual words they use are riddled with falsehood.

Is there any way of rationally comprehending, let alone of rationally countering, whatever Trump might possibly mean by claiming his intention to make American ‘great’ again?

Admittedly the ‘again’ bit is rationally arguable, at least by those of us who recall such gruesome lapses of the US from greatness as, for example, the Vietnam War that cost President Lyndon Johnson his promised ‘Great Society’; the catastrophic levels of gun ownership that continually cost the country many times more casualties than terrorism or even wars; the shocking rates of poverty in the world’s richest country; and imprisonment rates that would be a disgrace to a totalitarian state like China, or, more accurately Chaina, let alone to the alleged ‘Land of the Free’.

But ‘great’? The only response Trump’s utterance of this word evokes in me is the urge to lampoon it by pretending to hear and read it as ‘grate’. 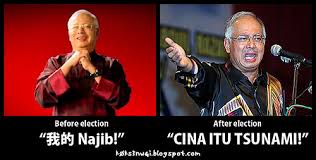 As in yes, Trump sure does grate on me, to a truly great extent, in much the same way as Najib Abdul Razak of Malaysia does with his mindlessly mendacious employment of the word ‘one’, as in his ‘1Malaysia’, whatever it supposedly signifies, and everything else he says and does. But the very idea of dealing rationally with the verbal vomit such people constantly spew forth, and that their venal, vapid or utterly vacant supporters so eagerly lap-up, seems ridiculous to me.

I could be mistaken, however, and in fact, I hope I am, and that PHIL2642 Critical Thinking may well prove a very pleasant surprise.

In case not, however, I’ve enrolled in a backup dose of academia in the form of ANTH2653, partly because the lecturer is one of my favourites from way back, and also because Anthropology is a welcome change from the Eurocentricity of most other Western university disciplines.

Plus, into the bargain, this particular unit promises to provide me with lots of rational arguments, both rational and even perhaps otherwise, against one of my other personal pet hates besides political lying and criminality: the further elevation of greed over need and thus the rich over the rest, or in other words neo-liberalism.

One thought on “In search of academic antidote to Bullshitism”