This hotel pianist once wrote songs for Sudirman and toured with P. Ramlee. Jon Chew tells  his extraordinary story.

At three o’clock, Tuesdays to Sundays, underneath the gold-leaf dome roof of the grand five-star Hotel Majestic in Kuala Lumpur, a man hunches over a black Yamaha piano. He wears a bow tie, a white jacket, and a hearing aid on his left ear. Slowly, he takes out a small turquoise clock, and leaves it on the left-hand ledge. He places a file of loose sheet music next to him. He takes a pause. Then, he begins to play.

He doesn’t smile. His fingers dance on a white ivory floor, born again like a young ballerina’s joy at touching the ground with the tip of her toes. He starts with “Moon River”, segues into “Top of the World”, then flows into the classic “As Time Goes By”. He is 75 years old.

For 45 minutes, history’s greatest pop songs are seamlessly twisted in the pianist’s hands. Still, no smile.

Hotel Majestic —which first opened its doors in 1932, and relaunched in December, 2012 to much fanfare—is a building that doubles as a treasure trove of Malaysian history. Former patrons claim the Allied forces of World War II conspired within the walls of this hotel; the inaugural meeting of the Independence of the Malaya Party, held by Datuk Onn Jaafar, took place here in 1951.

Dato’ Ooi with Tan Sri P. Ramlee, both are from Penang

Today, as every day, guests are spending a cloudy afternoon basking in the Majestic’s colonial luxury. A group of girls eat scones on embroidered sofas. Some aunties chatter while sipping the house-blended Boh Cameronian tea. Waiters decked in white jackets walk around in brisk fashion. The only constant is the sound of music that floats in the air, the last thing anyone would remember.

Yet, unbeknownst to everyone present in this room, the old man hunched over the piano is Ooi Eow Jin. 38 years ago, Ooi Eow Jin (known to hotel staff as Uncle Ooi) was one of the music industry’s most sought-after composers.

It was Ooi who once toured with P. Ramlee, who conducted the most lauded orchestra in the land, and who wrote the first song ever recorded in a studio by a revered Malaysian singer: Sudirman.

Ooi will always have a love affair with hotels. In 1960, he became one of the first resident pianists at the E&O Hotel in Penang, and entertained guests every night in their lounges for three years. On one of these nights, Alfonso Soliano, a jazz hero, music arranger and the founder of the seminal RTM Orchestra, came to the hotel for drinks. 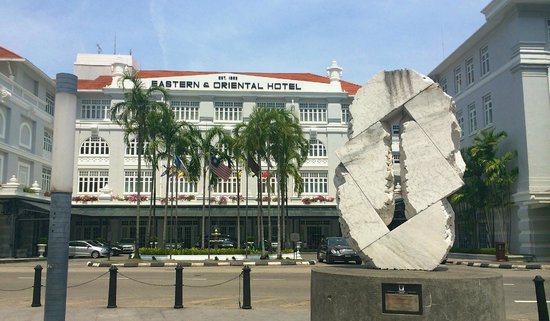 “It was at that place when he first heard me,” says Ooi as we sit at a corner of the Majestic before his session. His voice is brittle, strung-out. His thoughts jump between past and present. Sometimes he stops, and leans forwards to ask you to repeat your question. He wonders why we’re sitting here in conversation.

Well, you have an interesting life.

“I don’t know what is there to write about me,” he says, words rattling gently inside a soft, time-worn box. “I’ve been doing this for too long.”

But of the details on the night that changed his life, his memory is still as clear as a full moon. “I was playing that night, and he heard me,” he recalls. “He got interested, started asking questions about me with his friends. After I played, he got a hold of me personally and asked, ‘Why don’t you come to KL and play with the Orchestra?”

“Those days, the RTM Orchestra was the biggest thing to happen to music.”

This was a big deal. Soliano had moved from his part-time job playing keyboards at nightclubs to starting an orchestra at then-Radio Malaya in 1957. When television broadcasting was introduced in 1963, the RTM Orchestra became one of the most widely-watched music acts in the country.

It was a fork-in-the-road moment for the then-24 year old Ooi, and he left his day job as a government clerk and took the risk of moving to the capital. “Imagine people saying, ‘You are crazy. You’ve got a full-time salaried government job, and you’re leaving it for a contract job.’” He wags his finger, reminding you that one generation will always admonish another for choosing uncertainty over certainty. “But that was my calling. I couldn’t be a clerk if there was something like this in front of you. Those days, the Orchestra was the biggest thing to happen to music.”

Radio Malaya Band with Alfonso Soliano in  the early 1960s

Ooi would spend the next 17 years in the RTM Orchestra. “It was a great experience playing all kinds of music. To have the orchestra there, that’s something, you know? That… that really took my heart away.” Soliano would groom Ooi to become the orchestra’s senior arranger, giving him opportunities to conduct concerts, and teaching him how to compose a piece of music. “He guided me. He wanted me to depend on my ears. ‘What you hear, you play’, he would tell me.’”

Ooi’s career would soon intersect with another artiste looking for his own break in life. In 1976, a young singer with a songbird’s voice by the name of Sudirman Arshad took part in a nascent reality show called Bintang RTM. In the final round, Ooi arranged a Broadway medley that would help Sudirman win the competition. “I used two songs. One of them was ‘Cabaret’, and the other was ‘Big Spender’. I arranged those two songs for him, and he got first prize because of that.”

The two became friends, and Ooi wrote the first song Sudirman ever recorded inside a studio, a soulful number titled “Teriring Doa”. History tells us that Sudirman would become an Asian phenomenon, pulling in 100,000 people in a Chow Kit Road open air concert, tabbed as “Malaysia’s Number One Entertainer”.

“One thing I know of Sudirman is that he is a very, very humble man, a very nice person to know,” Ooi says. “Every time he meets me, when he was famous, he would say, “Mister Eow Jin, I can never forget you for what you’ve done for me. Imagine someone like that saying like that about you.” He looks down, humbled by the power of a sincere compliment. “It makes your heart melt.”

Ooi gets up from his seat, and returns soon after with a CD in his hand. It is a compilation of twenty compositions, a greatest-hits collection he gives out to friends. It’s part of a personal canon that encompasses over 60 Malay pop songs, a nostalgic walk-through of the local music industry’s heyday.

He penned the weepy hit “Masa Berlalu” for singer Salamiah Hassan, the mother of current jazz singer Atilia; other singles include Dahlan Zainuddin’s “Lagu Untukmu”and Yunizar Hoessein’s “Kisah Gadis Sepi”. He wrote the entire soundscape for Yassin Salleh’s blockbuster film Dia Ibukuin 1981, along with the theme song sung by the popular M. Nasir. He would rub shoulders with industry luminaries that spanned the entire region; names like Gigi Villa, the Alleycats and Frances Yip all sought out Ooi’s ability to twist an American ballad sound around a Malaysian tongue.

“I have something that will knock you down.” He takes out a photograph, and lays it on the table. It is a black-and-white snapshot of a boyish, bespectacled Ooi wearing an army uniform. He is standing next to P. Ramlee on the shores of Sebatik Island off Tawau.

Industry luminaries sought out Ooi’s ability to twist an American ballad sound around a Malaysian tongue.

Ooi played for the Malaysian legend during a tour of 21 army barracks in Borneo in 1965, bringing A-class entertainment to the armed forces. “We were quite near the Indonesian camps, and we could hear gunfire sometimes, at a distance… A few of us would fly in on helicopters into these camps, and we would do on-the-spot performances for the soldiers.”

By any generation’s estimation, this is unquantified success. But as Ooi deep-dives through his past, something escapes his grasp like grains of sand. For all the credits, his name rarely comes up in any historical tome of Malaysian music.

When asked about his success, Ooi pinches the skin of his wrist. “I am the only one amongst so many Malay composers. I was the first non-Malay composer to write Malay songs for films,” he says. “There is something, when I tell you, you’ll feel a bit sad. You know FINAS [National Film Development Corporation Malaysia]? I won the prize for best theme music for one movie, you know? After they announced the prize for best theme song for the movie, you what came out in the papers the next day? Nothing came out.”

His voice becomes unsteady. “You devote so much to this, and you get nothing out of it. Just because of…” And he pinches his skin again.

Older guests who come to the Majestic Hotel—some fans of the RTM Orchestra, or simply those who listen to artistes like Sudirman and are homesick for a piece of history—still remember Ooi. “Some will come up and say, ‘Hey, you formerly from RTM Orchestra ah?’ Ya lah, I’m now doing a new job.” By a twist of fate, the Filipino quartet who plays in the evenings after Ooi’s session are the Solianos, a family ensemble who are all children of the late Alfonso Soliano, Ooi’s mentor.

Many years later, Ooi still plays because it is a calling that he cannot quiet. “How do you retire? Unless you are too sick to play? I will play until I cannot play. Because there is nothing else to do.” Ooi has also seen his only two sons through tragedy; the eldest had a brain tumour in his twenties that has resulted in two serious operations, and his youngest son died of leukaemia as a youth. “These are just the sad things of my life I put away. I store it away somewhere, and try to pretend it didn’t happen.”

He comes to us after his first session. He sits on our table, and a waitress brings him a cup of coffee. Instead of drinking one of the hotel’s hinterland imports, this cup is made from a three-in-one instant coffee mix from Malacca, a sachet he gives to the kitchen to specially brew for him every day. He grabs her hand, and pats it like a grandfather.

“Thank you.” He looks up and smiles at her, paying forward the kindness once shown to him a long time ago. “You are a very nice lady.”

He leans forward, eyes tainted in fading black. “Did you hear me?” He looks back at us for an answer.

We could hear you.

“I’m always not sure whether people can hear me from back here.”

Soon, he returns for his second 45-minute session. The medleys will fill the room. But all around him, the music stays silent.

UPDATE: As of 30th June 2015, Mr Ooi has retired as a pianist, aged 77. However, friends rallied around by organising a fund raising concert to help the pianist through his family difficulties.

On 7th September 2015, Mr Ooi was conferred a Datukship by the state of Penang. Poskod.MY is honoured to have played a small role in bringing wider attention to this music man.