“Prejudice is a burden that confuses the past, threatens the future and renders the present inaccessible.”

If the government is truly serious about helping the Indian or any other minority oppressed group, then this is what it has to do. It has to come down hard on anyone who does otherwise and perpetuates the continued oppression of the minority community. It is never all about handouts. It requires genuine effort at inclusion – nothing else works.–P. Gunasegaram

QUESTION TIME | Perhaps the title should have been just “Apa India mahu?” because the word “lagi” implies that you have too much. The fact is that Indians in the country have too little of everything except for their relative shares in such things as the extent of gangsterism, number of people in jails, number of people killed in custody, unemployment and so on.

Although the per capita income of Indians in Malaysia is higher than that of the bumiputeras (includes Malays and others), they are the most disadvantaged group in the country as shown by other social indicators. In fact, even in terms of per capita income, Indians, who are now largely in the urban areas as opposed to bumiputeras in the rural areas, face higher living expenses. If this is adjusted for, they might become the most disadvantaged even in terms of income.

But who are the Indians? 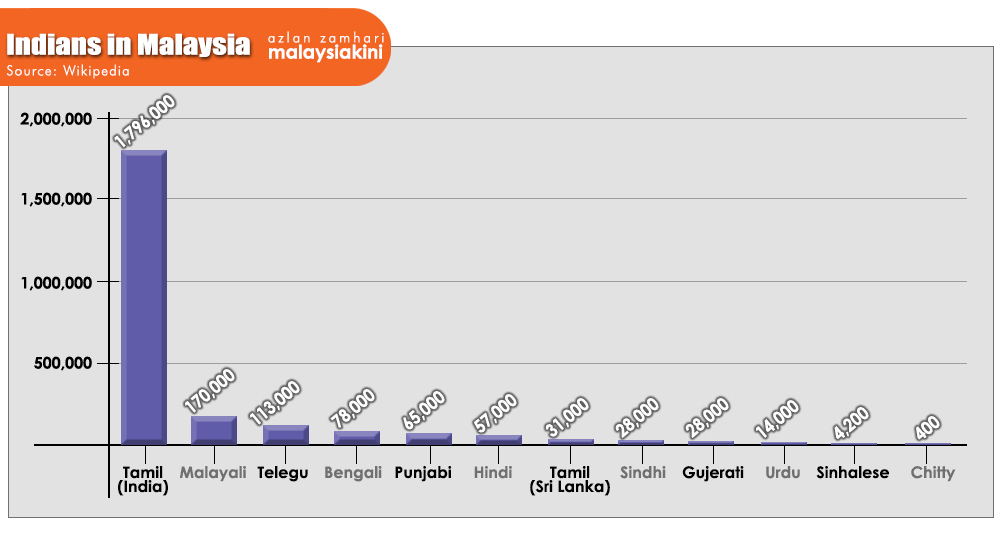 Indians form about two million people accounting for some seven percent of the population in Malaysia with Malays about 50 percent, Chinese about 25 percent and other bumiputeras about 11 percent. But they are not a uniform community – many subgroups being far better off than the average in terms of income and social well-being.

Tamils from India (see table) form by far the vast majority, accounting for some 75 percent of those considered Indians and this is the group which has been the most disadvantaged largely because of historical and social reasons. They were exploited successively by the British, the Malayan and the Malaysian governments who gave and are giving scant attention to their predicament. This is the group that we are referring to here when we talk about disadvantaged Indians.

While Indians have a long presence in Malaysia, dating back over 2,000 years ago, most of them were brought in to work as indentured labour – a form of bonded labour which replaced slavery after it was abolished in the late 19th century. Bonded labour involved working to pay off a debt which is often not clearly specified with workers paid extremely low wages for very hard work.

Most of them worked in the rubber plantations and in labour intensive tasks such as building roads and railways. In fact, it would be true to say that in the years of British occupation and the early years of Malaysia’s independence, the Indians built not only the roads and railways, making Malaysian infrastructure among the best in developing countries, but made rubber the main export earner.

But their efforts were not rewarded despite them being organised in the plantation sector in 1954 under the National Union of Plantation Workers or NUPW, at one point one of the largest unions in the world. While their union leaders were chauffeured around in Mercedes Benzes and they did manage to bring some benefits to members, plantation workers remained mired in extreme poverty.

Eventually, the Indians, the majority of whom were then in estates, were dealt a severe blow when in the 80s, the government encouraged cheap illicit labour in the hundreds of thousands into plantations and other industries, halting any chance of higher income there.

A former finance minister and plantation owner, Tan Siew Sin, even said then that if illegal labour was removed from plantations, they would collapse. The NUPW, the MIC and the government stood by and watched this happen – a move that further impoverished an already impoverished community.

In fact, some in the government and in politics may even have clapped their hands perversely to watch this perceived Indian dominance of the plantation industry albeit at the labour level whittled away through the import of cheap, exploited Indonesian labour.

From the green ghettos, the Indians moved into towns and cities to earn a living, creating slums. Unemployment among them increased, they lived in squalor, they took whatever work they could get and as with any disadvantaged minority they took to crime as a means of living. They resorted to gangs for social inclusion and self-respect.

The Indians don’t deserve this extremist naturalised Malaysian Indian. He has become the Pope of UMNO Muslims

Now, on the back of an impending election, the government very publicly came up with a Malaysian Indian Blueprint, or MIB. The prime minister himself unveiled it. Considering that the government and the MIC have done precious little for the Indians, will the MIB make a difference?

From a brief look, the MIB is a pretty good blueprint in terms of identifying and documenting the Indian problem. It lists all the major problems backed with relevant statistics which show that Indian Malaysians are lagging behind and may slip further.

For instance, median household income for Indians per month rose 7.5 percent compounded annually (against 7.8 percent for Malaysia) for 44 years between 1970 and 2014 to reach RM4,627 compared to RM4,214 for bumiputeras and RM5,708 for Chinese.

Recall that Malays form about 50 percent of the population and that other bumiputeras form some 11 percent – the latter group includes indigenous people, and those from Sabah and Sarawak, are among the poorest in Malaysia. This could mean that Indian income is already lower than that of Malay income. I could not find standalone figures for Malay income.

Here are some direct quotes from the MIB which starkly reflect the Indian predicament:

“In 2014, Indian families accounted for 21 percent of the total number of reported domestic violence cases. In that same year, a total of 518 Indian children or 12 percent of all reported cases were classified as children who are in need of care and protection. These statistics indicate a prevalent problem of dysfunctional family dynamics and broken family bonds.” 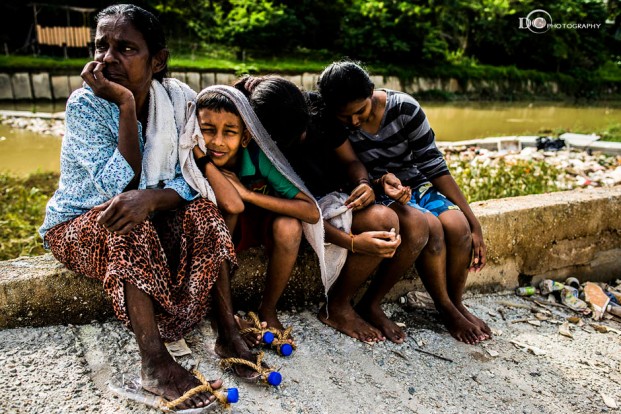 “It is estimated that about 70 percent of gang members in the country are Indians. Although some leave behind gang activities after their schooling years, field experts suggest that a number of them, particularly those from underprivileged and broken families, stay on in gangs and progress to more serious crimes. According to PDRM 2014 statistics, of all violent crime arrests, Malaysian Indians comprise 31 percent (against national population of 7 percent) compared to Malay and Chinese counterparts at 51 percent and 11 percent respectively.”

“The Malaysian Indian community has the challenge of ensuring its religious rights are preserved while working with the regulatory requirements and sensitivities of the majority group. At the same time, Indian religious institutions such as temples need to increase their contribution to their communities in areas such as education, values and welfare.”

“…while there are points of pride in being of Indian ethnicity, some aspects of Indian representation in Malaysian public life – such as associations to crime, gangs, alcohol abuse, violence, low education and poverty – impart a negative slant to the community’s overall image.”

And finally, for me the most important point the MIB makes: “If left unchecked, the economic, educational and social challenges highlighted above will solidify the existence of an Indian sub-class that is continually marginalised and excluded from the Malaysian mainstream. Not only is this a waste of human potential, it is a cost to the country’s economy and a threat to national inter-ethnic harmony.” Well said.

But going beyond the thoughtful recommendations by the MIB, the Indian community has a far better chance of progressing if the government and the politicians are serious about helping them.

What is it that the Indians want and need? Apa lagi India mahu? Indians want to claim their right to this country through what I shall call the 3Rs – recognition, respect and reward.

Recognition means acknowledging the immense contribution of Indians to the development of the nation which was out of all proportion to their numbers through the growth and development of the rubber industry and infrastructure projects amongst others. This also means acknowledging that they worked under terribly unfair conditions and paid a major price for their systematic exploitation. It includes as well dealing once and for all with the issue of stateless Indians even as Muslim Indonesians, Bangladeshis and Filipinos are routinely given citizenship with few questions asked.

Trust this Prime Minister to faithfully implement MIB (Malaysian Indian Blueprint). I won’t even trust him with my cat. But I expect the Malaysian Indians to vote for him in GE-14. You want respect, start with self respect first. How about that. Remember the words, SELF RESPECT. Do not be like the UMNO Malays who are dependent on handouts.–Din Merican

Respect means to give them due consideration to practice their way of life without being ridiculed and discriminated against because of their colour, manner, background or way of life. It means honouring their religious tradition without being constantly harassed by fanatics who heap scorn on their beliefs and destroy their temples and places of worship. It means no stereotyping and attributing unfair cliches to Indians. Respect also means not being arrested at the drop of a hat, or being arrested, beaten up in the lock-up and sometimes killed.

Reward means to give them their due for the effort that they have put in by themselves to improve themselves. This means stopping racist administrators dispersed throughout the civil service who make it a point to make life difficult for some and routinely practice discrimination against other races and religions, and especially Indians. Reward means giving them their due without they having to constantly ask and fight for it in every sphere.

If the government is truly serious about helping the Indian or any other minority oppressed group, then this is what it has to do. It has to come down hard on anyone who does otherwise and perpetuates the continued oppression of the minority community. It is never all about handouts. It requires genuine effort at inclusion – nothing else works.

The Indian helped build this country, with his two bare hands. He wants to be recognised and respected for that. He wants to be given the opportunity for his children to progress beyond what he has been able to.

His ancestors and he himself have paid for that with their blood, sweat and tears. He is as good as any other Malaysian can be. If you deny him that, he will fight for it any which way he can for he has little left to lose.